DPRK Study Team members, Lew Franklin and Dick Donald, at Stanford University’s Center for International Security and Cooperation (CISAC) have developed a GoogleEarth model of the Unha-3 trajectory. This model is based on Unha-2 physical measurement estimates by MIT’s Theodore Postol,[1] but with flight parameters significantly modified by new data not available at the time of his publications. This includes: a precise Latitude/Longitude/Altitude location of the Unha2 at 77.3 seconds after launch resulting in a modification of the first-stage pitch program; addition of 100 Latitude/Longitude/Altitude data points derived from a DRPK video of the large computer screen shown during simulated third-stage flight, which failed during the actual launch; and iterative modeling with an accurate oblate rotating earth to match the DPRK-announced Kwangmyongsong-3 polar orbit. 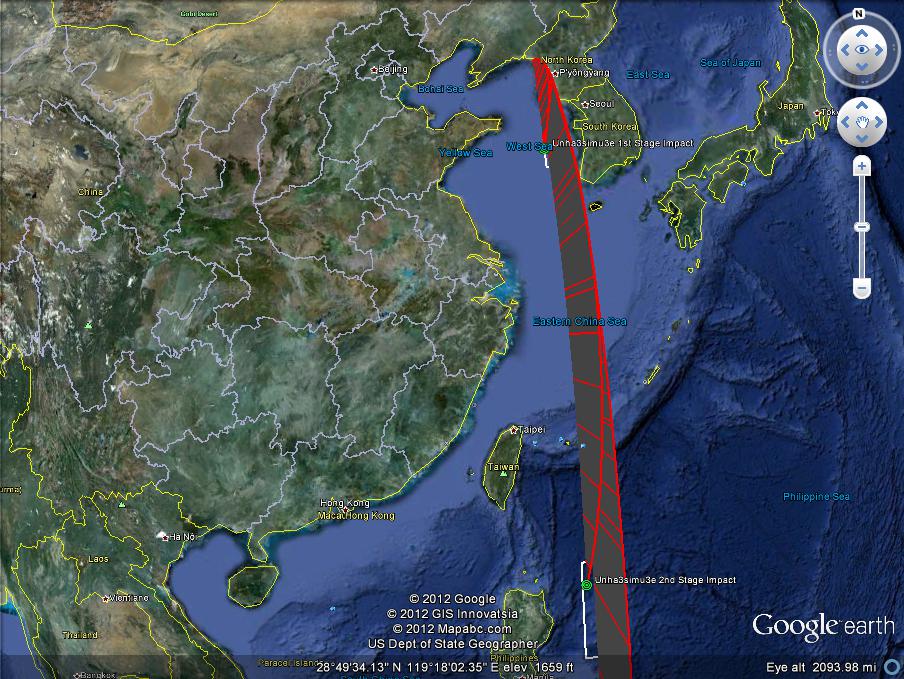 The Unha-3 is now seen to physically resemble the Unha-2, so this model was then flown from the Sohae (Tongchang-ri) launch pad, and fine tuned so that the first and second stage impacts fell into or close to the announced maritime impact zones and agreed with the numerous DPRK announcements of the orbit and the Kwangmyongsong-3 mission and parameters. As such, it should be useful for planning purposes. Please note that the actual flight, if successful, will differ somewhat from this pre-launch flight simulation.

This model and KMZ code is graciously being offered to the public by the authors on 38 North for personal use and distribution.

For those with GoogleEarth, the KMZ file can be downloaded and added to “My Places” by using the “Open” command, and then checking the “new” box by the file entry at the bottom of your “My Places” in the Sidebar. This will open the following in the GoogleEarth “My Places” sidebar:

For more information and documentation of the modeling details, contact Lew Franklin at [email protected].

[1] See Theodore Postol, “Preliminary Assessment of the North Korean Unha-2 Launch of April 4/5, 2009; and David Wright and Theodore A. Postol, “A Post-Launch Examination of the Unha-2,” Bulletin of the Atomic Scientists, June 29, 2009.