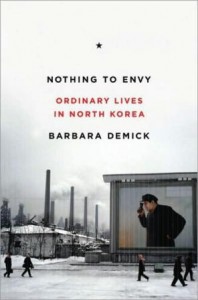 “Barbara Demick has won the Samuel Johnson prize.” I was looking at a copy of her book when Inspector O walked into my hotel room and closed the door.

“I know. Wonderful writing. Well deserved.” He scanned the walls and then the ceiling before moving a worn green chair nearer to mine.

“You know the book?”

“Of course I know it. You think I don’t follow the literary scene? I keep telling you not to worry so much about what I’m reading.”

Apparently, O was in a touchy mood, and I have learned not to make things worse when he is. I changed the subject. “So, I suppose you know who Samuel Johnson was.”

Wrong tack, obviously. “Just an innocent question. How about Boswell, you know who he was?”

“I entertained a Scottish policeman named Boswell once. Big guy. Pretended to be an authority on the poetry of Robert Burns. You ever meet him?”

“No, the policeman. You ever meet him?”

“Very vague. Maybe you should run for office some day.” He grinned. “The other Boswell, the one who hung around with Samuel Johnson, you familiar with him?”

“As a matter of fact, I did read one or two of his works.”

“That’s what I figured.” The inspector nodded at Demick’s book, which I had put face down on the small table next to my chair. “You read that?”

“I’m happy to say I did. Like you said, wonderful writing.”

We sat quietly for a minute or two, contemplating the scene. Then I felt it wasn’t good to let the silence go on, so I broke it. I said the first thing that came to mind. “Too bad about your soccer team.”

“Something happened to them?”

“You mean you don’t know? They lost all their matches at the World Cup.”

“Is that a fact? I don’t watch soccer. Too much running around. Didn’t I already mention that to you?”

“No, must have been someone else. So, if you don’t watch soccer, what have you been doing these days? Weeding rice fields?”

“I’ve become partial to potatoes. I got to liking French fries when I was in Macau. There’s a McDonald’s right next to the Banco Delta Asia, did you know that?”

“Nice place. Very light and clean. Not too much grease on the fries. You meet some interesting people in there. A lot of guys carrying bags.”

“As a matter of fact, we grow plenty of potatoes around here, up north mostly, but so far I haven’t seen a lot of French fries.”

“That reminds me, I meant to ask you about something. The other day I saw a news story that the head of South Korean intelligence said that he thought your…um, leadership…was having…ah, cerebral problems.

O laughed, a little too loudly, I thought, and rather too directed at the ceiling light. “Where was this new story?”

“It was in Chosun Ilbo.”

“I don’t have it home delivered, if that’s what you mean. We get a copy now and then at the office. It’s fun to read out loud. I think I remember the article you’re talking about.”

“If I recall correctly, it said the center was displaying signs of memory loss and occasionally talks nonsense. I’m quoting here.”  I looked at the ceiling light. “Supposedly, there was interest in a few particular sentences delivered during a recent field inspection at a potato farm. I think it was: People should not live on potatoes alone. They need to have rice, too. We should send them rice.”

O shook his head. “Well, it was right in the middle of rice transplanting season, so why not talk about rice, even at a potato farm? Anyway, I looked but I couldn’t find that quote anywhere.  Maybe I missed it. Or maybe they have sources I don’t have.” He lowered his voice. “Sure, maybe they put bugs on the spuds.”

I shrugged. “Potatoes have eyes, not ears.”

“Maybe they put a little high tech bug on someone’s badge. There’s a whole group that goes around on those field inspections, taking notes, craning their necks to make sure they look like they’re paying attention. Last place the security detail would look, on one of those badges.” His voice had dropped to just above a ragged whisper.

“Not yours of course, because you don’t wear one.”

“Sure, that’s it, someone in the inner circle is leaking info to the South Koreans. They record it all on a teeny tiny tape recorder embedded on a badge, then go home and download it onto a potato chip. Just get a list of people who were on the trip to the farm, and eliminate them one by one.” He looked at me solemnly.

“I don’t think that’s what it means to ‘eliminate suspects.’”

O stood up and started out the door. “Just covering my bases. Oh, and pass my congratulations to Barbara Demick if you see her.” His voice had returned to normal.

I glanced at the ceiling light. O smiled. “Low tech,” he said, “Nothing to envy.”