Sinuiju City (신의주시),  the capital of North P’yŏngan province, sits on the Amnok (Yalu) River directly across from the Chinese city of Dandong. One of only two rail crossing points between the DPRK and China, Sinuiju is the North’s major gateway for rail and truck traffic. Much of Dandong’s foreign trade (estimates run as high as 80%) passes through Sinuiju.

With a population of about 360,000, the city ranks about fifth in terms of population, after Chongjin, Hamhung, Nampo, and Wonsan. (We’re not counting Pyongyang here, because it is virtually a province.) Given the size and importance of North Pyongan, Sinuiju as the provincial capital is considerably smaller and less developed than might be expected, especially given its role as a gateway city. By comparison, the two other main cities in North Pyongan—Chongju and Kusong—each have just fewer than 200,000 residents. 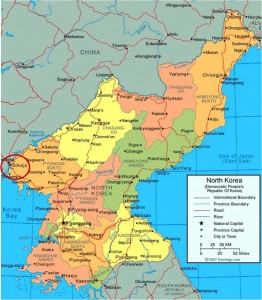 A new chief party secretary for Sinuiju, Ri Hak Song, was named in November 2009, right around the time Pyongyang launched its ill-fated currency revaluation. Ri is in the unenviable position of having to ride herd over a border city that is supposed to interact with the Chinese. Sinuiju is considerably more exposed to outside influence than most North Korean cities, has a large foreign (ethnic Chinese) population, and is expected to be an engine in a new North Korean policy designed to encourage more interaction with the outside world while still guarding against too many ideologically impure “mosquitoes.” Kim Jong Il visits Sinuiju frequently (see below), so Ri cannot hope to be invisible, and all the while, he has to keep his balance in the middle of a tricky succession ballet underway in the capital.

Besides its importance as a transportation center, Sinuiju is home to a number of major industrial facilities. Kim Jong Il has visited Sinuiju around twenty times in the past ten years, underlining the importance of the city to the regime’s plans and interests. In addition, Kim has one of his many villas located in Sinuiju on a small lake, about five miles southeast of the center of the city.

History. Sinuiju is of relatively recent vintage. The name literally means New Uiju, and the city was created as an administrative center next to the town of Uiju early in the twentieth century to handle shipments across the Amnok River into northern China. During the Japanese colonial period (1910-1945), Sinuiju was developed into a key industrial city. In 1945, soon after liberation, the city was the site of a student demonstration against the Korean communist party that was crushed by force and became an important test of Kim Il Sung’s leadership. Like other North Korean cities, Sinuiju was heavily bombed during the Korean War. The remnants of a bombed bridge still go halfway across the river and are a major tourist attraction on the Chinese side.

Industry. The view offered from the Chinese side of the river into Sinuiju is of a moribund city. In fact, Sinuiju is not a pretty place, but its grubby mien is to some extent misleading. While much of the North Korean industrial base has collapsed, there are several important functioning factories in Sinuiju.

One of the most important of these is the Rakwon Machine Complex, located on the rail line about five miles south of the Amnok. The complex is a key production base providing equipment for much of the North’s industry. That includes machinery used for construction of hydropower plants, and components for a recent upgrade of the Namhung Youth Chemical Plant, located not far away in Anju City. At various times, DPRK media have claimed the Rakwon complex has manufactured turbines, boilers, excavators, compressors, oxygen separators, and large machine presses. Kim Jong Il visits this complex frequently, underlining its importance to the economy and to the regime’s propaganda. Kim’s most recent appearance there was in June 2010.  The complex is not far from his Sinuiju villa.

During the years of multi-year economic plans during the 1960s and 70s, and taking advantage of several plants constructed by the Japanese during their occupation of the country, Sinuiju was built up as a center of light industry. Chief among the light industry plants is the Sinuiju Cosmetics Factory, which has served as a model enterprise intended to highlight innovations in economic policy in the early 2000s. A number of Sinuiju’s factories are related to the textile industry. There is also a shoe factory and the Sinuiju Enamel Cast Iron Cookware Factory. All of these undoubtedly need upgrading.

Defense Industry. Sinuiju has several plants that may be under the control of the Second Economic Committee and manufacture weapons or other defense related equipment. Some reports suggest that the Sinuiju Chemical Fiber Complex, for example, may be connected with the North’s CBW production.

Local Industry. Sinuiju has the usual complement of local industries, designed as part of the regime’s efforts to have localities produce on their own, without central inputs, many of the daily necessities and light industry products. These enterprises are generally starved for resources and for years have functioned at a low level, if at all.

Agriculture. Most of Sinuiju’s population lives in the city’s urban wards, and only a small proportion resides in the nine ri, or rural villages within the city boundaries. According to the DPRK’s 2008 census, only about 7% of the population is considered “rural,” residing in one of the ten cooperative farms in the city.

Education. In North Korea, virtually all of the major universities are located in the capital. Each province has an array of specialty colleges, focusing on agriculture, teaching, mining, fine arts, etc., and Sinuiju is no exception. Reflecting the city’s special focus on light industry, there is also a Light Industry College.

Health Facilities. As the provincial capital, Sinuiju probably has North Pyongan’s best health care facilities, including the provincial and city People’s Hospitals, a maternity hospital, and a Tuberculosis Care Center. The Ryongchon train blast in 2004 offered a glimpse into the state of Sinuiju’s health facilities. WHO and International Federation of the Red Cross officials who visited Sinuiju soon after the accident, reported that treatment at the hospitals in the city was at a reasonable level, though the facilities were woefully short of medicines and supplies.

Over the past year, projects have been undertaken in Sinuiju to improve the quality and accessibility of clean drinking water. Many of the city residents reportedly avail themselves of bottled water from China.

Transportation. Sinuiju has a major rail yard for passenger and freight traffic. Passenger trains to and from China (between Pyongyang and Beijing) run fairly regularly twice a week.

Soccer. The soccer pride and glory of Sinuiju is the local soccer team, known as the Sinuiju Locomotive Sports Group (기관차체육단), was established in 1956, and placed fifth in the North Korean soccer league in 1996, 1997, 1999 and 2000. Their home arena is Sinuiju Stadium, which has a capacity of about 17,500, and is the city’s main arena for major events. The Sinuiju Locomotive SG is the home team of Lee Kwan Myong, who was to make his international debut in the Russian Club Krylya Sovetov in 2007, but no contract was ever finalized. Undoubtedly, Sinuiju residents with televisions carefully followed the World Cup games, which were broadcast nightly after the news from mid-June through early July this year.

Sinuiju has been the site of several North Korean attempts to create a special zone aimed at attracting foreign investment. In 2002, the North announced a Sinuiju Special Administrative Region (SAR), granting it extraordinary independent legislative, executive, and judicial power under a Chinese-Dutch businessman, Yang Bin. The plan fell apart before it got off the page when Yang—long on a Chinese bad list—was arrested by PRC authorities on charges of tax evasion and other financial crimes.

Since then, plans have been afoot to revive the idea of a special economic zone, locating it one or another of the islands in the Amnok near Sinuiju and giving Chinese enterprises development rights. That plan has taken on a little more life with the advent of a new central policy in China focused on developing the country’s northeast provinces. Integral to that plan is beefed up economic interchange between those provinces and North Korea, including improvements in DPRK infrastructure to facilitate transport of Chinese goods to the North’s port of Rason. As of now, plans call for the zone to be situated on Wihwa and Huangjinbing islands.

To greatly increase the flow of goods and people between China and North Korea, the two sides have agreed to construct a new bridge between Dandong and Sinuiju to supplement the existing Friendship Bridge built in the 1940’s by the Japanese. That bridge is one of only two that currently carries rail traffic between the two countries. The second goes across from the town of Tumen.

There are actually already two bridges going out from Dandong, but only one goes all the way across the river. The other one, built in the early twentieth century, was bombed by American forces during the Korean War and now ends half way across. Dandong authorities hope that the larger, new bridge will be an economic boost. The effects of increased cross border traffic on Sinuiju remain to be seen. Survey work for the new bridge is already underway and construction is set to begin in autumn 2010.