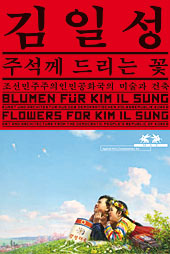 A cultural event in Vienna has given the Western world a peek, however small, into North Korea’s cultural and political life. An exhibition of art and architecture from the North, “Flowers for Kim Il Sung,” is currently showing at the Museum of Applied Arts (MAK) and offers a rare glimpse into North Korean public life (as wonderfully highlighted in Barbara Demick’s Nothing To Envy: Ordinary Lives in North Korea and Andrei Lankov’s North of the DMZ, as well as in James Church’s ‘Inspector O’ mysteries). But beyond this, the exhibit’s themes may also proffer a hint at how the DPRK wants to be perceived by the West, and what may be important to Kim Jong Il as his country begins the process of succession.

Many of the exhibit’s paintings—both the oil paintings and the Chosonhwa [traditional] style paintings—reveal a richness of detail and color. They depict landscapes, flowers (including the lovely Kimjongilia and Kimilsungia), pastoral scenes, women in native dress, traditional dances, and chubby, adorable children. A recent group of oil paintings (2010) emphasizes Pyongyang street scenes—almost as if the North Korean artists had studied and emulated the light-suffused work of American painter, Thomas Kinkade. A group of drawings and photos of the Tower of Juche and the Ryongyong Hotel, and panoramic views of Pyongyang emphasize quality and grandeur. Among all these works, it is hard to escape the ironies prevalent throughout: light in a country where there is little electricity at night; well-fed children in a country devastated by starvation and repeated famines; tree-covered landscapes in a land increasingly deforested from people having to forage for wood to use as fuel.

Much of the exhibit is comprised of portraits of Kim Il Sung and Kim Jong Il; media reports have indicated that the negotiations to allow these paintings—regarded as national treasures—to leave the DPRK were sensitive and delicate. These portraits are as striking for what they reveal as well as for what they do not. For instance, several do not include Kim Jong Il, but showcase Kim Il Sung instead. These include the 1995 piece “President Kim Il Sung is always with us,” which shows the late President sitting—in his signature, western-style suit—among an adoring group of citizens; and the 1985 painting “A visit at a farmstead,” which shows Kim Il Sung relaxing at a farmhouse, in a bucolic scene, with prettily-colored trees and flowers. There are also paintings depicting Kim Il Sung and Kim Jong Il together: the 1995 painting, “We are the happiest children in the world;” the 2002 painting “Together on the path for the people,” which has them walking and conferring; and the 2005 portrait “My wonderful land, oh my fatherland, may you prosper forever!” in which they are overlooking Pyongyang. The above portraits suggest themes of filial piety and continuity of leadership, particularly as the DPRK prepares Kim Jong Il’s youngest son, Kim Jong Un, to take over the reins of leadership in the event of his father’s death or further decline in his health. However, there are no photos in this exhibit of the latest successor or the extended Kim family.

The paintings of Kim Jong Il show him in a variety of roles. The 1980 portrait “The endlessly burning light of the party center, Kim Jong Il,” shows the young, handsomely-attired politician, working late into the night, his office overlooking Pyongyang. The 2000 painting “Thanks to the general, a new era began in the Hanture plain,” shows him inspecting a farmstead, with a pastoral background and robust, healthy-appearing citizens. The 2000 painting “Kim Jong Il, the Supreme Commander of the KPA, deeply concerned with the soldiers’ diet,” shows him visiting a military kitchen and sampling food—only a few years after the devastating famine which killed 600,000 to two million North Koreans. And the 2005 painting “The bell tolling on the road to the frontline” shows Kim wearing his signature down jacket, and gazing reflectively—having removed his tinted glasses—on a snowy embankment in a remote area, during one of his ‘on-the-spot guidance’ inspections.

The imagery of Kim Jong Il in these portraits echoes varied descriptions of him offered over the years by Western observers and North Korean defectors. Numerous published profiles of Kim Jong Il have emphasized not only his vanity and cruelty (cf. Kang Chol-Hwan’s memoir The Aquariums of Pyongyang, and defector accounts in Bradley Martin’s Under The Loving Care of the Fatherly Leader: North Korea and the Kim Dynasty), but also his élan, charm, style, vigor, intelligence, and attention to detail. Reports abound of Kim’s skill as a micro-manager, with exquisite attention to detail, and in his father’s style, offering on-the-spot guidance during his visits to military installations, Communist Party functions, factories, and farms. Photos and video footage have always shown him smiling, snappily-dressed in his signature suits (or his down-jacket), with a bouffant hairdo, sunglasses, and platform shoes; raising his arms, he always appears energetic and vigorous.

But what is not seen in the MAK exhibit is the Kim Jong Il of 2010. Photos and videos from the April 2009 North Korean Supreme Peoples’ Assembly—which reappointed Kim Jong Il as Supreme Leader of the DPRK—were revealing in terms of his medical condition after his 2008 stroke and likely incapacitation, even following a course of rehabilitation. In the videos and photos, Kim was halting, weak, and walked with a mild limp; he appeared to have lost a significant amount of weight; while neatly-attired, his bouffant hairdo was absent. Even more striking was his upper extremity left-sided weakness and partial spasticity in his left arm; his left arm carriage was stiff; when clapping his hands, only his right arm clapped, against a stiff, spastic left arm. The videos and photos also suggested possible hemi-neglect (he appeared to look off to the right much of the time and looked bewildered during the conference proceedings) and the loss of awareness of deficit that is found in approximately 10 percent of stroke victims. Kim exhibited enough residual neurologic signs to raise concerns about the magnitude of his stroke and its likely associated neuropsychiatric impairment.

However, information gleaned from President Clinton’s visit to Pyongyang in August 2009—in which he was accompanied by his personal physician (who had the opportunity to observe Kim close-up in a lengthy meeting)—suggested that Kim had recovered significantly from his stroke; President Clinton said that he found Kim to be “unexpectedly spry” and in good health. In a subsequent visit (September 2009) the visiting Russian musician Oleg Ovsyannikov (in Pyongyang for a concert commemorating the 61st anniversary of the DPRK) stated, “Kim’s memories and speech were clear,” and that “he moved both of his hands freely and smoked cigarettes.” Kim has likely undergone extensive rehabilitation and post-stroke treatment, possibly including anti-platelet drugs (to prevent re-clotting) and antidepressants (which treat not only post-stroke depression, but which may also have neuroprotective effects even in non-depressed stroke patients).

Nevertheless, Kim’s long-term health prospects remain ominous, and his recent moves of designating his youngest son as his successor and reshuffling important political positions—especially the recent appointment of his brother-in-law Jang Song Taek, who has held powerful positions in the Korean Workers’ Party as well as in the State Security Department, as Vice Chairman of the powerful National Defense Commission—suggest an awareness of such realities. The epidemiologic data for post-stroke survival—even for patients without purported risk factors such as diabetes, smoking, apathy, and post-stroke depression—are sobering. Post-stroke survival rates at five years are little better than 35-40 percent, with over half of such patients becoming significantly disabled. In his study of the life cycle of narcissistic leaders, Dr. Jerrold Post writes of how aging and late-life intimations of illness and mortality can propel not only their dreams, but accelerate political developments. In Kim’s case, this may account for some of the North’s recent provocations against the U.S., South Korea, and the West (such as the kidnapping of journalists Laura Ling and Euna Lee in March 2009; the April 2009 Taepodong II missile test; the May 2009 nuclear test; and the March 2010 sinking of the Cheonan), as well as his recent trip to China.

Prior U.S. administrations have struggled with various images of Kim, as well as what they might mean for North Korea and its relationship to the world. The clinical sensitivity of an observant physician—in the viewing of the April 2009 video footage of Kim as well as observations made during President Clinton’s visit—may provide valuable clues for President Obama and his national security team. But perhaps the North Korean government was not so opaque in arranging this unique exhibition at the MAK. The idealized portrait of the DPRK, and more importantly, of Kim Jong Il—easily derided in the above exhibit as propaganda—may provide insights into a people and its leadership. Paintings with themes of filial piety, tradition, heroic myth, courage, and pride—such human emotions on both sides of the military-diplomatic divide—may provide valuable clues, not only in understanding a new chapter in the history of the Korean peninsula, but in framing President Obama’s ongoing diplomatic response to this hermetic, proud, and tragic nation.