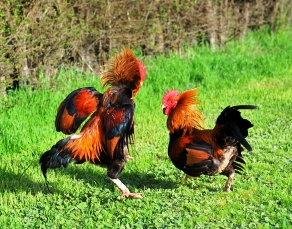 “Did Seoul just win a terrifying game of chicken?” This question (from a Tweet by Beijing-based Globe & Mail correspondent Mark Mackinnon) was on many minds this week. On Monday, December 20, 2010, the South Korean military completed a provocative 94-minute live-fire drill as part of its military exercise on Yeonpyeong Island. Despite threats of a deadly response, North Korea failed to take action.

A month earlier, a similar exercise prompted North Korea to launch a deadly artillery barrage on the island, destroying the homes of villagers and leaving two civilians and two soldiers dead, many others wounded.

ROK: Stop shooting onto our islands!

DPRK: You do that again and we’ll shoot harder!

A game of chicken—for those unfamiliar with this North American idiom—is a contest of wills in which competitors try to demonstrate their opponents’ cowardice (chicken = coward) by forcing them to back down first. It can be as innocent as children staring into each other’s eyes until one of them blinks, or as deadly as two cars speeding toward each other until one driver swerves to avoid a head-on collision.

The “winner” in a game of chicken is the player demonstrating the most reckless, suicidal disregard for outcomes; Or the player confident enough to guess when the opponent is bluffing. Intelligence rarely plays more than a peripheral role, since intelligent people don’t play games of chicken.

During the Cuban missile crisis of October 1962, it was said that Soviet leader Khrushchev “blinked first” when he withdrew nuclear missile installations from Cuban soil. By threatening all-out nuclear war, US President Kennedy had won a strategic game of chicken.

But as we now know, that wasn’t really a game of chicken at all! The USSR was responding to the deployment of more than 100 US-built missiles in Europe that could strike Russia with nuclear warheads. As a result of back-channel negotiations, these US missiles were removed as part of a deal for the removal of USSR missiles from Cuba.

Far from a game of chicken, this was a well-orchestrated case of brinkmanship. Brinkmanship is a willingness to expose oneself to major risk in order to achieve some purposeful outcome. Used by governments, this is not a game, but a political tactic. If there is a “winner” in brinkmanship, it is not the most reckless player, but the one who has achieved a specific goal. The point of brinkmanship, however, is to illustrate that a “win” by either side is impossible. Taking a conflict over the brink will result in unacceptable losses by both sides.

In an unequal contest of power, brinkmanship favours the side that has the least to lose. This fact alone has made the DPRK masters of brinkmanship. And being the most sanctioned country in the world has strengthened their hand. Raising the spectre of war and destruction does not strike fear into the hearts of North Korean citizens (or affect their stock values) nearly as much as it does citizens of South Korea. Brinkmanship has been used effectively to show defiance and unity of purpose, to extract information, to test defenses, to distinguish the enemy’s rhetoric from actionable warnings, or just to make visible their lines in the sand.

So to answer your question, Mark: No, Seoul did not win a terrifying game of chicken—unless they were playing solitaire.

There was no need for North Korea to react to the latest live-fire exercise at Yeonpyeong Island. They had already demonstrated a willingness to defend their territory during the last round. Their brinkmanship had already achieved its purpose: to re-focus American attention to the North Korean issue and to expose South Korea’s empty cupboard of options.

If the only response that South Korean President Lee Myung Bak (LMB) and US President Barack Obama can muster is further military escalation, their dismal political weaknesses are laid bare. These weaknesses became even more apparent during the deadlocked UN Security Council’s deliberations on the matter over the weekend.

The DPRK’s decision not to engage a second time at Yeonpyeong coincided with the farewell from Pyongyang of New Mexico Governor Bill Richardson, following four days of unofficial, but high-level meetings. The DPRK is willing to return to Six Party Talks. They are willing to allow the return of IAEA inspectors to their nuclear facilities. And they are ready to sell 12,000 fresh nuclear fuel rods (enough to build 8-10 nuclear bombs) to the ROK.

These offers are “nothing but a trick to justify their illegal uranium enrichment program,” opines an LMB staffer. Besides, according to the Los Angeles Times, Seoul is sending “a more subtle but nonetheless determined message.”

On Tuesday, after years of refraining from a practice that had irked the North, ROK officials (protected by a contingent of South Korean marines) joined church members in lighting a 30-meter-tall steel Christmas tree covered with 100,000 LED lights on top of the 155-meter Aegibong Peak in Gimpo, Gyeonggi. The “tree” is visible to North Koreans living near the DMZ, and was part of an anti- cross-border-propaganda agreement reached between South and North in 2003.

If the North shoots at the tower, Minister of National Defense Kim Kwan Jin told the ROK National Assembly, “We’ll retaliate decisively to take out the source of any shelling.”

Way to play chicken all by yourself, LMB!