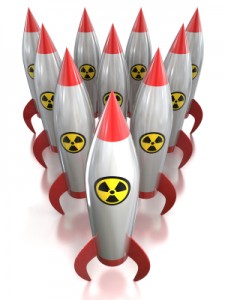 Kim suggested the issue could be discussed in the next meeting of the US-ROK Extended Deterrence Policy Committee.

Now there is no chance that this will actually happen. And, South Korean Lee Myung Bak subsequently sacked Kim—for being a weak and ineffectual Defense Minister, not for the comment about nuclear weapons. But despite the departure of the silly Defense Minister, his silly idea lives on.

Why not put U.S. nuclear weapons back into South Korea?

Well, there are lots of reasons. The first reason is that the United States Air Force has absolutely zero interest in forward deploying tactical nuclear weapons. Ask any Air Force officer about the 180 gravity bombs the United States still keeps in Europe. He’ll tell you that they should have gone home years ago. South Korea doesn’t have the facilities to handle forward-deployed gravity bombs and a US support unit would need to be established and deployed.

And then there is the South Korean public, which remains ambivalent about South Korea’s close relationship with the United States.  South Korea is a vibrant democracy, which is a good thing. That vibrance, however, often expresses itself in the form of riots—sometimes directed at the United States and its military forces stationed in South Korea.

Apart from figurative riots among the US military and in all likelihood  literal riots in Seoul, putting US nuclear weapons back into South Korea is a dumb idea for a third reason: In an age of jet aircraft and intercontinental missiles, we don’t need to forward-deploy nuclear weapons.

In the 1950s, the United States started forward deploying nuclear weapons in large numbers all around the world because that’s where the bad guys were.  In the days before long-range bombers and ballistic missiles, forward-deployed nuclear weapons made a kind of military sense—just like the Sears Roebuck catalogue before the internet.

Over the years, however, forward deployed assets have become vulnerable liabilities.  Indeed, the germination of the academic thinking about “strategic stability” was the 1954 RAND “basing study” that concluded that US forward deployed bombers were so vulnerable as to invite, instead of deter, a Soviet attack.

US officials over the course of the Cold War attempted all manner of tricks to conjure a relationship between the two, including the existence of particular kinds of nuclear weapons, basing approaches and sharing-arrangements that purportedly demonstrated the implied American commitment to use nuclear weapons on the behalf of allies.

Today, the United States has only 180 forward-deployed B61 gravity bombs in Europe that continue to play this explicitly political role.  As one senior NATO official said to me, “We would never drop a B61 off the wing of an airplane.” Yet, the bombs sit, corroding quietly in their vaults.

In Asia, the last US nuclear weapons left South Korea in 1991. For South Korea and Japan, the slight of hand that makes extended deterrence nuclear has always been a bit more elaborate—Kabuki theater, if you will.

In 2002, the Bush Administration completed a Nuclear Posture Review that asserted the US commitment to Asia was embodied in the ability to deploy nuclear-armed Tomahawk missiles aboard attack submarines—a capability that had been in storage since the end of the Cold War.

In 2010, the Obama Administration decided to chuck TLAM-N, but emphasized that the United States was making a new fighter, the F-35, nuclear-capable and keeping the ability to forward deploy nuclear-capable B-2 bombers to Guam.

This is the sort of thing that sounds convincing in a conference room, aided by a slight touch of jet lag from the 14-hour trans-Pacific flight, but it doesn’t hold up to scrutiny. The United States, for example, would never forward deploy a bomber with nuclear weapons to Guam, before heading onwards to North Korea.

The B2 is perfectly capable of making the round trip to North Korea from its home base in Missouri. That is certainly how the B2 trains, and during operations in Yugoslavia, Iraq and Afghanistan, the initial missions were all conducted from the Show Me State.

As far as I can tell there are no facilities on Guam to handle US nuclear weapons and the units responsible for them do not practice shipping bombs out to Guam. Indeed, why would they? If and when we drop the big one on North Korea, it will have a 65305 postal code.

Of course, that doesn’t stop US officials from pointing to useless capabilities to reassure Seoul. You can hardly blame them for taking the easy way out. The only problem, of course, is when we can’t afford to upgrade some runway on Guam or decide to convert the B2 to a conventional-only role, we will have to explain to our allies that, like Santa Claus, it didn’t really matter if this all was real or a lie—as long as they believed.

Still, why not let South Korea have some totally useless nuclear weapons? As manifestly stupid ideas go, is it any dumber than the U.S. nuclear weapons stationed in Turkey with no evident means of delivering them? (Yes, that is a real policy!)

On the other hand, if we are going to try some stupid ideas to strengthen extended deterrence, let’s really shoot for the moon! Why restrict ourselves to nuclear weapons?  Or old Cold War methods?  We are a new generation. We don’t need our parents’ stupid ideas.  We can come up with our own!  Surely, together, we can come up with a dozen patently dumb ideas—like dumb as boiled gravel—that are still more sensible than forward deploying nuclear weapons in South Korea.

Here are the ones I thought of, just off the top of my head:

Readers are encouraged to submit their own “Extended Deterrence proposals that are stupid, but just not quite as stupid as putting US nuclear weapons in South Korea.”