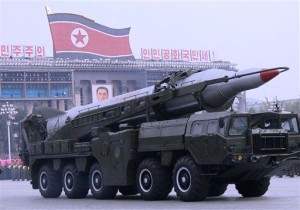 Earlier this month, U.S. Defense Secretary Robert Gates provided the latest estimated range and timeline of the North Korean ICBM, the TaepoDong-2. According to Gates, the DPRK is within five years of being able to strike the continental United States, combined with its expanding nuclear program, the country “is becoming a direct threat to the United States.”[i] His announcement caught the press off guard, but for policy wonks, it was just the latest in a long line of estimates from the U.S. intelligence community and officials that vary widely but rely on many assumptions that need further examination.

The U.S. official range of the TaepoDong-2 (TD-2) depends on the agency and the person providing the answer. For example, the latest publication of the Air Force’s National Air and Space Intelligence Center (NASIC) Ballistic and Cruise Missile Threat, released in April 2009, estimated the range of the TD-2 as 3,400+ miles (5,471 km) just short of the technical ICBM range (5,500 km).[ii] In fact, nothing has really changed in 10 years about the TD-2 according to NASIC. Going back to 2000, NASIC still lists the same image of the TD-2 as well as the same range estimates even after the Unha-2 test—a Space Launch Vehicle modified TD-2—in April 2009 which certainly provided additional information about North Korea’s capabilities.[iii]

In comparison, the February 2010 Ballistic Missile Defense Review Report (BMDR) issued by the Department of Defense noted that the range for the TD-2 could also be 10,000-15,000 km depending on the number of stages (10,000 km for two stages and probably 15,000 km for three stages).[iv] Interestingly enough, it is the BMDR high end estimate and not the NASIC low end estimate that dominates the policy discussion concerning estimates of North Korea’s ballistic missile capabilities.

Historically, the U.S. intelligence community’s estimate for the range of the TD-2 has varied between 4,000-10,000km for a two stage missile and 10,000-15,000km for a three stage missle.  One of the first official pronouncements on the potential range of the Tapeodong was the 1995 National Intelligence Estimate (NIE) entitled, “Emerging Missile Threats to North America During the Next 15 Years.” It concluded the TD-2 could have a range of 4,000-6,000 km, but did not elaborate on stage weights, payload or number of stages. The estimate also concluded that North Korea did not have sufficient technology, including propulsion and guidance systems, to develop an ICBM before 2010.[v]

After the review, some members of Congress criticized the NIE for being too political and ignoring several technical facts. This prompted the formation of a panel, headed by former DCI and now Secretary of Defense Robert Gates. The 1995 Gates Panel provided some recommendations for improving the NIE process and explaining the technical limitations to Congress. But it also reinforced the conclusions of the 1995 NIE on the North Korean ICBM threat.[vi]

Estimates started to change in 1998 when the Rumsfeld Commission, established by Republicans in the House of Representatives, refuted the 1995 Gates panel and concluded that a lightweight variation of the TD-2 could have a range of 10,000 km. The Commission did not elaborate on what it meant by “a lightweight variation”—either lighter payload or lighter body—though it did note that the status of the program could not be determined precisely.[vii]

In response, in 1999, the intelligence community updated the 1995 NIE. In its new report on “Foreign Missile Developments and the Ballistic Missile Threat,” the estimated ranges for the TD-2 increased and matched the Rumsfeld Commission. The NIE stated:

But, like the 1998 Rumsfeld Commission, it did not include stage weights or fuel types.

The January 2001 version of the Office of the Secretary of Defense’s study entitled, “Proliferation: Threat and Response,” changed its estimate of the range of the TD-2 from 4,000-6,000 km, which appeared in the 1997 edition, to a three stage design with a several hundred kilogram payload that could reach anywhere in the United States.[ix]

The 2001 NIE expanded this estimate and listed a two stage TD 2 as having a 10,000 km range and a three stage system could deliver a “several-hundred-kg payload up to 15,000 km—sufficient to strike all of North America.” Interestingly enough, the NIE correctly predicted that North Korea would test the missile using a Space Launch Vehicle (SLV).[x]

A 2004 National Intelligence Council (NIC) report described the missile as: “The multiple-stage TaepoDong-2—potentially capable of reaching parts of the United States with a nuclear-weapon-sized payload.”[xi] Later NIC reports, including the most recent one issued in 2009, are silent on the range of the TD-2 and only state that North Korea continues to develop ballistic missiles and is successfully testing several ICBM techniques.[xii]

In their public statements, both Bush and Obama administration officials offer vague estimates, stating the missile could hit portions of the United States. Robert Walpole, a senior intelligence official, testified in September 2000 about the range of the TD-2. Echoing the 1999 NIE, he stated:

Despite the failure to place an object in orbit on April 5, 2009, North Korea successfully demonstrated the same staging and separation technologies required to launch a two-stage TaepoDong-2 ICBM capable of reaching the United States.[xv]

Why the Wide Range?

Why the wide differences in range estimates? Part of the answer is due to the secretive nature of the North Korean program. Part is due to the fact that there is only a limited amount of open source data available in general. The April 2009 missile test provided the first official images of the TD-2, as the failed 2006 missile test did not produce any known images or data. As a result, U.S. intelligence officials had to establish several assumptions, such as material used for the missile body, fuel used, number of stages, and payload weight. Another part is due to the lack of successes in the North Korean program. The massive failures cannot provide an accurate estimate of the second and especially third stages.

One example of the lack of information is testimony in 2007 from General Obering of the Missile Defense Agency. In speaking about the TD-2 as a threat to the U.S. he responded:

We don’t know precisely, and we don’t know that much—all we know is, based on what we have observed and what we believe, we believe it would be capable of reaching the United States.[xvi]

In testimony before the Senate Armed Services Committee on April 20, 2010, after the Unha-2 test, Dr. James Miller, Principal Deputy Under Secretary of Defense for Policy observed:

The threat to the Homeland from states like North Korea and Iran continues to develop. Although neither has yet acquired or deployed intercontinental ballistic missiles (ICBMs), both are working to acquire and/or develop long-range ballistic missile capabilities, a threat that has proven to be inherently difficult to predict.[xvii]

Because of the lack of known data points and images of the TD-2 and other North Korean missiles, the U.S. intelligence community has to speculate and build estimates on assumptions, all of which can produce a wide band of ranges. A change in assumptions led to the different ranges in the 1998 Rumsfeld Commission.

In a 1998 speech at the Center for Strategic and International Studies, Robert Walpole, the National Intelligence Officer for Strategic and Nuclear Programs, noted the methodology used during the 1998 Rumsfeld Commission. In the report, it concludes that a lightweight TD-2 could have an estimated range of 10,000km.[xviii] However, in the publicly available document, the Commission fails to provide the justification and rational for the sudden increase in range. There is no mention of intelligence that the North Koreans use lighter material or have the capability to decrease the size of a nuclear payload to a few hundred kilometers.

The Rumsfeld assumptions are important as it appears every major estimate of the North Korean TD-2 missile, outside of NASIC, make the same assumption with regards to range, namely that the North Koreans build a missile with three stages, lighter material and fuel and a light payload. However, at least in public documents, officials did not describe the exact likelihood of North Korea utilizing lighter material or a lighter payload. Usually, in intelligence documents, estimates are given with confident levels, such as high or moderate confidence. However, the commission only stated the nature of the program cannot be “determined precisely.”[xix]

Another reason was that before the April 2009 Unha-2/TD-2 test, there was no available information on the TD-2, only conjecture and speculation based on existing Scud missile technology and worst case assumptions since there was no known image of the TD-2. After the failed 2006 test, since there was little or no information gained from the test, the speculation continued. The 2009 test of the Unha-2/TD-2 resulted in the first publicly available images and information concerning the missile, and provided an opportunity to examine it in more detail. However, even after the Unha-2/TD-2 test, NASIC did not adjust its estimate from previous years.

Several questions really need to be answered to explain the dramatic shift in estimates from 1995 to today. Does North Korea have access to lighter and stronger alloys for its missile frames or are North Korean missiles still based on the heavy metal body Scud designs? Did North Korea improve the type of liquid fuel used in its missiles, making them sufficiently energetic, volatile and efficient to justify the dramatic increase in range?  Or is it still using the very inefficient and bulky fuel used in Scuds? What pieces of intelligence led the 1998 commission to dramatically increase the range and why is the estimate still high in the more recent BMDR? Finally, why does NASIC still continue to publish the estimate of the TD-2 below 10,000km? Is it possible that its estimate is a realistic assessment of the technical limitations of the North Korean program?

The comments made by Secretary Gates revive the now over 15 year old debate about the possibility of North Korea achieving ballistic missile technology. Unfortunately, his comments failed to mention the probability or the extent to which North Korea has improved its missile technology. As the policy debate goes forward on when North Korea will obtain intercontinental-range ballistic missiles, remembering official past estimates and the assumptions built into them will be essential in reaching accurate conclusions about the future.

[ix] Office of the Secretary of Defense, “Proliferation: Threats and Response,” Department of Defense, January 2001, http://www.dod.gov/pubs/ptr20010110.pdf.

[xvi] General Obering, “Hearing of the Subcommittee on Defense of the Senate Committee on Appropriations; Subject Missile Defense,” April 25, 2007, accessed via Lexis Nexis on August 18, 2010.

[xviii] Robert D. Walpole, “North Korea’s Taepo Dong Launch and Some Implications on the Ballistic Missile Threat to the United States,” Given at CSIS, December 8, 1998, http://www.gwu.edu/~nsarchiv/NSAEBB/NSAEBB87/walpole.htm.