In a 38 North Special Report, Joseph S. Bermudez Jr. provides an in-depth account of the North Korean shelling of Yeonpyeong Island on November 23, 2010, as well as the implications of this hostile exchange for the two Koreas and the international community at large. 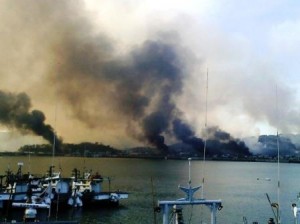 The Yellow Sea—known as the West Sea to Koreans—along the west coast of the Korean Peninsula has been the scene of numerous naval incidents between the Democratic People’s Republic of Korea (DPRK) and the Republic of Korea (ROK) since the signing of the Korean War Armistice Agreement on July 27, 1953.[i] The most numerous and violent of these incidents have occurred in the relatively confined waters surrounding the five islands of Paengnyŏng-do, Taech’ŏng-do, Soch’ŏng-do, Yŏnp’yŏng-do and U-do. There are a profusion of reasons for this; however, the common underlying factor is the Northern Limit Line (NLL) which the DPRK has repeatedly decried as illegally drawn.[ii]

In October 1999, based upon its claims of 12 nautical miles of territorial waters, the DPRK unilaterally declared a new maritime line-of-control significantly further south than the current NLL. This has subsequently resulted in a number of significant and sometimes violent incidents. During the past twelve months alone these have included: a naval engagement on November 10, 2009 in which a Korean People’s Navy (KPN) Shanghai II class patrol vessel was heavily damaged; a January 27, 2010 Korean People’s Army (KPA) coastal defense artillery exercise near the ROK islands in the West Sea and overlapping the NLL; the March 26, 2010 torpedoing of the ROK Navy corvette Cheonan by a KPN midget submarine near the island of Paengnyŏng-do; a August 9, 2010 KPA coastal defense artillery exercise in the area of Yŏnp’yŏng-do; and most recently the November 23, 2010 artillery attack on Yŏnp’yŏng-do.

A notable feature in both the January and August artillery exercises was that the KPA employed “time-on-target” tactics where rounds from different units, at varying distances, arrive at the same time on the same target. In addition to these larger exercises a number of smaller artillery exercises were held throughout the year across Hwanghae-namdo including several immediately north of Yŏnp’yŏng-do…

[i]       The Korean War is known as the “Fatherland Liberation War” within the DPRK. Aside from identifying the Yellow Sea as the West Sea, both Koreas also refer to the Sea of Japan as the East Sea.