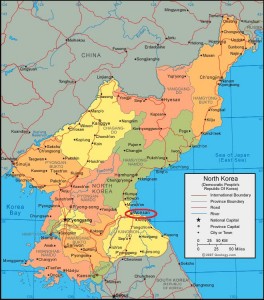 Wonsan (원산시), the capital of Kangwon province, sits on North Korea’s southeast coast. It is a small city in world terms, only 363,000 people, but is still the fourth largest in North Korea after Chongjin, Hamhung, and Nampo. When the sun shines and the sea air sparkles, Wonsan may be the prettiest city in the country; it certainly has a friendlier mien and a more welcoming atmosphere and manners than its larger cousins.

In April 2010, Wonsan was one of several cities singled out by the Korea Taepung International Investment Group for special attention and major investment. Kim Jong Il has a seaside villa in Wonsan, and frequently visits the city (more than twenty times over the past 10 years) for on-site inspections as well as for relaxation. The chief of the city’s WPK committee is Ryom Pyong Chin, appointed to the position in April 2009. Given how often Kim Jong Il shows up in Wonsan, Ryom must be a busy man.

Wonsan is in some sense dominated by its port, which was the main reason the city developed in the late 19th century. Then, when the Japanese took over the

peninsula early in the 20th century, Wonsan became a major seaport for trade with the Japan, a role it retained until recently when Tokyo cut all trade ties with North Korea. Most notably, Wonsan was the entry point for many of the approximately 90,000 Koreans who sailed from Japan to North Korea in the decades after the Korean War.

Wonsan is also an important rail hub, situated on the main line running up the coast to the country’s only rail link to Russia via Khasan. Additionally, the city is the east coast terminus for one of the DPRK’s three main east-west rail lines. Because of the large volume of train traffic that transits the city, Wonsan is the site of a major rail yard. In addition to its rail connections, Wonsan is linked to Pyongyang by the Youth Hero Motorway, the major east-west highway crossing the country.

Wonsan was originally part of South Hamgyong Province, but was split off to become the capital of the North Korean part of Kangwon Province in 1946, when provincial borders were redrawn as a result of U.S. and Soviet division of the peninsula.

Only about twenty percent of the land of Wonsan city is arable. The 17 relatively small cooperative farms grow rice, some vegetables and fruit, and livestock. 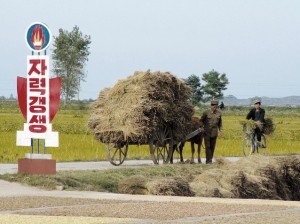 Situated on the outskirts of Wonsan, the Chonsam Cooperative Farm is possibly the only place in the country where foreign visitors are allowed into a working farm. (Photo: Flikr) 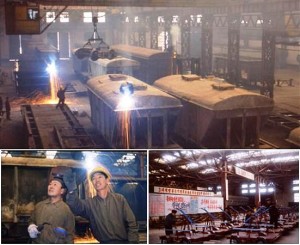 This is a railway factory that manufactures and reconstructs many of the freight trains for transporting raw materials on the DPRK’s eastern railway corridor.

The Wonsan Youth Power Station—a cascade that includes five hydropower plants—was completed in 2009 amid much North Korean media hoopla. Reflecting the importance of the project, Kim Jong Il visited several times over the course of construction, and made a final inspection tour in January 2009, only a few days before the opening ceremonies. Not long after cascade began generating power, North Korean media portrayed its output as making a major contribution to lighting up Wonsan City, even permitting outdoor nighttime weddings, and nighttime fishing from the pier. A second hydroelectric project—the Wonsan Army-People Power Station is under construction.

Wonsan has about a dozen higher-level educational institutions—specializing in agriculture, medicine, fisheries, and education. The Wonsan University of Agriculture is the largest agricultural university in North Korea. Founded in 1948 on the grounds of a German Benedictine abbey, the school maintains a high profile and prestige within the North’s educational establishment. Kim Jong Il has visited several times in recent years, giving the school a high profile.  Besides numerous agricultural related departments, the university has a graduate school and an agricultural scientific research institute. The campus is thickly wooded, and one of the North’s “State Natural Treasures,” a pine tree said to have been planted 1890, is on the grounds.

North Koreans and foreign visitors consider Wonsan a choice vacation spot. The beaches are especially attractive during summer, when other parts of the country get very hot and humid.  One well-known place is the Songdowon Recreation Resort. It stretches over a large area, and is divided into different districts: a sand beach swimming district, a scenic district at Mount Jangdok, and a rest-home district. 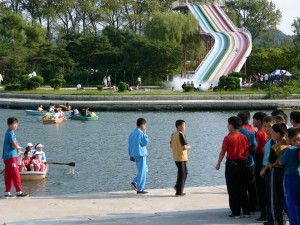 Within Songdowon is the International Children’s Camp, originally built on the orders of Kim Il Sung for children from other countries to meet North Korean children, and, no doubt, gain a good impression of North Korean society and its system. The camp has a swimming pool with a slip-and-slide and a pedal boat-pond. The children’s camp open-air theater was given a face-lift in late 2009, shortly after Kim Jong Il visited. In August 2010, the camp celebrated its 50th birthday.

Wonsan is frequently the site of national sports competitions. In 2009, the city hosted the closing ceremony of the Pochonbo Torch Prize, a general sports competition where teams from all over North Korea compete in everything from weightlifting to soccer. The countrywide Mangyongdae Prize Sports Competition has also been held in Wonsan, as was the Youth Championship in December 2008. Earlier that year, the 4th national round of the weightlifting competition among school teams was hosted in the city.