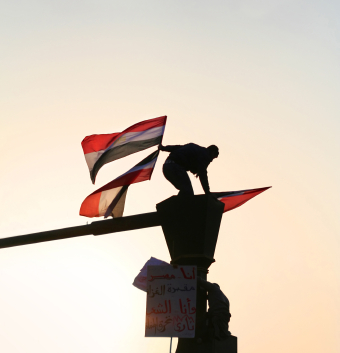 A Former President and a Grand Bargain that Worked.

For two years the United States, South Korea and Japan have intermittently talked of an all-or-nothing deal with North Korea on the nuclear standoff, which President Lee Myung Bak has called a “Grand Bargain.” Egypt’s peace overtures to Israel in the late 1970s are the role model for such a bargain. However, President Anwar El Sadat was prepared to take risks at that time that none of the major actors in today’s Korean stalemate can afford to imitate. Neither will we see North Korea repeat the kind of popular uprising that brought down Egypt’s President Hosni Mubarak in 2011. This leaves a painful, piecemeal engagement approach as the only option for change.

In the wake of Egypt’s uprising, media have been speculating as to whether other authoritarian countries are ripe for change. Most experts agree that a people’s movement that could topple the government in Pyongyang is nearly impossible. There are two key reasons why this is so. First, civil society spaces where counter-government action could develop barely exist in North Korea. More importantly, there is an absence of elites willing to risk challenging the existing order to harness a mass movement. Essentially, these elites have nothing to gain and much to lose; people who might benefit from regime change do not have the capacity to act. This was not the case in Egypt, where the eventual harmony of elite and mass mobilization forced Hosni Mubarak out of office.

The nature of Egypt’s future government remains to be seen, but for the youth that crowded Tahrir Square earlier this month, the government of the 1970s would have been recognizable. A military dictator ruled, opponents were subject to purges and freedom of the press was limited. The big difference between then and now, however, is that today’s political culture is not constrained by the permanent conflict with Israel. This conflict defined the country’s foreign relations: the humiliating defeat of 1967, followed by a 3-year war of attrition along the Suez Canal, then a war in 1973 that ended in stalemate. President Anwar El Sadat transformed this deadlock with a Grand Bargain that worked.

In the Egyptian incarnation, the Grand Bargain was a peace deal with Israel. In 1977, four years after initiating the Yom Kippur War, Sadat suddenly announced he was willing to unconditionally travel to Israel to talk about a real, lasting peace. He could not have known at that time that it would cost him his life, but he was well aware of the political risks he was taking. Had his initiative failed, it would most likely have cost him his presidency at home and irreparably destroyed his legacy. The attempt also meant alienating Sadat’s key allies in the region. In order to put an end to the state of perpetual war between Egypt and Israel, the Egyptian leader was willing, in essence, to risk throwing the concerns of his neighbors, including Syria and Jordan, under the bus. Those three countries had differing objectives related to Israel: Syria wanted to resolve the issue of the Golan Heights; Jordan, the West Bank and Palestinian issue; and Egypt, the Sinai Peninsula, which had been occupied by Israel since 1967.

Sadat was under pressure trying to run a struggling economy that was devoting 28% of GDP to the military. Coordinating the priorities of his key allies in the region was impossible; they couldn’t provide Israel with enough incentives to resolve all issues at once, nor were they willing. So he struck out on his own Grand Bargain, culminating in the Camp David Accords in 1979.

The allies currently facing North Korea also struggle to coordinate priorities. South Korea faces a security and existential threat from its northern neighbor. Japan demands resolution to the abduction issue and the threat posed by North Korea’s missile program. The United States is concerned above all else with trying to defend the NPT and a shaky global non-proliferation regime.

A Grand Bargain that addresses all these concerns is similar to the dilemma of the Middle East a generation ago; the United States, South Korea and Japan are unwilling or unable to provide North Korea with enough incentives to comprehensively resolve all these issues in one sweeping move.

In each of the three countries, domestic constituencies apply pressures that make it difficult for the governments to compromise on their key issues. Japan has painted itself into a corner by placing so much emphasis on the abduction issue—there is now a yearly multi-million dollar government department that keeps the problem prominent—that it is difficult for them to back down. The ruling DPJ is also currently facing internal fissures, and compromise on the issue would give a resurgent opposition enormous ammunition. Despite Lee’s talk about a Grand Bargain, which he initiated in 2009, his administration is now in no position to soften its stance after the Cheonan and Yeonpyeong Island incidents.

As for the United States, the Obama administration has an array of domestic initiatives it must expend political capital on, including health care and unemployment. Moreover, amid a number of significant international challenges, the administration now faces a tricky task in balancing U.S. interests in the Middle East while trying to encourage genuine democratic development. Furthermore, unlike Syria or Jordan in 1977, South Korea and Japan are not only key regional allies for the United States, but also absolutely crucial nodes in the U.S.-led global economic system. So although the United States is the only government among the three allies with the capacity to lead a Grand Bargain on the North Korea issue, it can’t afford to throw its allies’ concerns under the bus.

The level of mistrust between the three allies and the DPRK compounds the risk of trying to make a Sadat-style gamble on a Grand Bargain. A 60-year legacy of military conflict, broken agreements and failed efforts at engagement have only served to cultivate tenuous and skeptical relationships, constraining deal-making with North Korea. The significant risk Sadat took in dealing with a right-wing Israeli government is multiplied for a leader looking to engage the DPRK.

If a successful Korean Grand Bargain is difficult to imagine, the cost of war is nearly inconceivable. A second Korean War would utterly destroy Seoul and cripple the region’s economic growth. Conflict is by no means inevitable but the danger of further escalating tensions can’t be ruled out, particularly if the three allies continue on their current course of strategic patience. And despite the desires of some in Washington, Seoul and Tokyo, the DPRK is not going to collapse anytime soon, nor are its people going to foment an indigenous uprising.

Without the potential for an Egyptian style uprising or Grand Bargain for Korea, and heeding the need to prevent war, the only viable option left is an incremental, trust-building approach. This will ultimately be a long and difficult task, demanding both bilateral and multilateral efforts to address the range of concerns of all the major actors. If the dynamic of perpetual conflict on the Korean peninsula is ever to be changed, however, there is no alternative.