As the food aid discussions heat up, we have been engaged in a number of conversations with friends—and critics—about the logic of granting food aid. Some of the arguments floating around need much closer scrutiny. 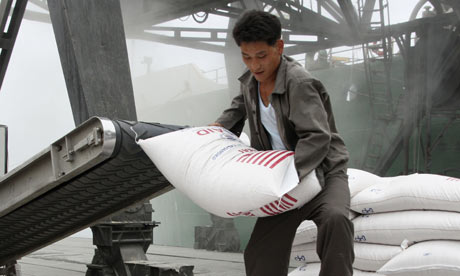 1. “The food situation in North Korea is not that bad.” Not surprisingly, these arguments tend to come from those opposed to extending assistance, particularly in South Korea. This claim could mean one of three things. The first is that the situation is not as bad as it was in the mid-1990s, which is undoubtedly true; no one has argued that it is. But given that perhaps 600,000 to a million people died in the great famine, that is not a reasonable metric. Is the argument that we should not intervene unless there is evidence of starvation on a massive scale? The logistic constraints of moving food are poorly understood. For U.S. donations, it takes as much as three months from the decision until food starts arriving in North Korea on a reasonable scale. Like genocide, food aid requires alacrity; waiting for evidence of starvation means you are already too late. And remember that people do not have to die for malnutrition to have long-lived effects on physical and mental development, particularly in children.

This claim could mean something more plausible, however, that the North Koreans are systematically overestimating the food problem in order to get aid on the cheap. Although this is possible, it is important to remember that we are not completely in the dark. We can now triangulate across a pretty substantial range of evidence that does not rely solely on what the North Koreans say. This evidence includes information on the fall harvest and projections on the summer harvest; these estimates are not pure guesswork, but are derived from a consideration of past harvests, with appropriate adjustment factors such as availability of fertilizer and adverse weather events (particularly the unusually cold winter). We know the non-Chinese aid picture with some certainty—basically none—and can even access the Chinese trade in grain, although the aid component of it is unknown. Estimating the capacity to import on a commercial basis is the real unknown, and could be more substantial than we allow. But although we believe that the WFP/FAO balance sheet exercises have overstated true need, it is clear that all indicators point to a deteriorating food security situation in North Korea.

A third meaning of this claim, and perhaps the most persuasive has been made by David Straub among others: that the situation in North Korea is not worse than food emergencies elsewhere in the world, and given limited resources we should give aid where it has the greatest effect. This will not be the case in a country where the government exhibits little or no buy-in to humanitarian norms and may well act to subvert donor intent. In a world where aid is of necessity rationed, this argument is hard to refute.

2. “We should not give food aid because it simply strengthens the regime.” This argument has surface plausibility because the bulk of the aid would move either through state-controlled institutions such as the public distribution system or public institutions like hospitals, schools, and orphanages. Yet on closer reflection, it may not make sense. It assumes—as many advocates of regime change do—that if we just squeeze the North Koreans hard enough they will cry “uncle” or even collapse. Christopher Hill, for example, has implied as much. We have precious little evidence that this is the case; to the contrary, our forthcoming analysis of sanctions suggests that the modal response to sanctions is to hunker down and tighten repression.

But more disturbing is the utilitarian calculus implied in such arguments: that it is worth imposing pain—even death—on innocent North Koreans in the uncertain hope that the regime will collapse. Even more cynical is the belief that this squeeze on civilians will yield some short-term and probably ephemeral political gain. Explain that logic to those facing the shortages.

A more limited version of this argument is undoubtedly true: namely, that aid acts as implicit balance of payments support and frees up resources for other regime spending priorities, including the military. But as we have long known, this problem is virtually inherent in any aid relationship; external resources of any sort are fungible to some extent and donors always have to calculate whether the inherent tradeoffs are worth it.

3. “The North Koreans are seeking aid not to feed the population now, but to stockpile food for the celebration of Kim Il Sung’s 100th birthday party next year, when the DPRK is supposed to emerge as a strong and prosperous nation.” Hmm. So the government is going to deprive people now—indeed, make them worse off—so it can be magnanimous next year? This doesn’t make any sense to us; if the regime feels it has a serious legitimacy problem now, why would it delay gratification? If the regime has a political problem, it has it now; if that problem is a worry that hungry people might defect or even revolt, then the solution would be to feed them, not build inventories.

Two variants of this argument are somewhat more plausible to us. One is that the North Koreans are seeking a cushion against the possible disruption of aid and trade, and adverse effects on prices, from some nuclear or missile fireworks later this year. Perhaps the North Koreans have been reading our blog and have come to recognize the adverse effects their provocations have on prices in their own country, and are therefore seeking a cushion.

Alternatively, the North Koreans might be seeking aid for a food crisis of their own creation; the structural problems in agriculture and distribution and the adverse weather have been compounded by a rebuilding of military stocks. The government launched an Army Provision Relief Project in January that amounts to nothing more than additional confiscatory taxes on farmers.

We have addressed this argument in more detail, but here it is worthwhile to consider the ethical rather than economic issues. That the government would choose to favor the army and officials over the farmers is both despicable and to be expected. But the ethical issues are not as clear-cut as they may appear. We may have little sympathy for reports coming out of Pyongyang that even mid-level officials and their families are experiencing distress. But remember that the North Korean army is a conscript army. The brass is going to be fed well no matter what. Good Friends has been reporting for some time on hunger within the lower ranks of the military and veterans. The Army Provision Relief Project, which the government appears to have called off, is really just shifting consumption from one-ill treated group—farmers—to another, conscripts.

4. “Food aid should not be offered until adequate monitoring is in place.” A sharp RFA reporter caught us out on our claim that monitoring would have to be dramatically improved. “Does this mean,” she insisted, “that North Korean concessions on monitoring are a precondition for the granting of food aid?” Gotcha! Well, as we all know—but are not supposed to admit—monitoring issues are of necessity a negotiation; the North Koreans hold the access card. But entering into those negotiations is actually a pretty good way of gauging the seriousness of their intent. If they blow off the monitoring issue altogether, then we might well be wrong and things might not be as bad as we think. But finding out what the monitoring regime will look like cannot be gauged in advance; you have to have the conversation. Extensive discussions with those involved in the 2007-8 package suggest to us that the NGOs, the U.S. government and the WFP can be appropriately hard-headed on this issue. In 2005, the WFP touted an agreement reached “in principle” with the North Korean government that would be a good place to start. It provided for:

This program was never implemented, but elements of it found their way into the 2008 food package, which was distributed by the WFP working in concert with a consortium of NGOs. In short, we have some experience in crafting memoranda of understanding with the North Koreans on monitoring issues. But if the meaning of the “no aid without monitoring” injunction is that every grain of rice has to be accounted for, then it is simply cover for saying that you don’t want to give aid in the first place. No monitoring regime with North Korea is going to fully meet humanitarian standards, period. That is precisely why we have the conflicts with the country that we do.