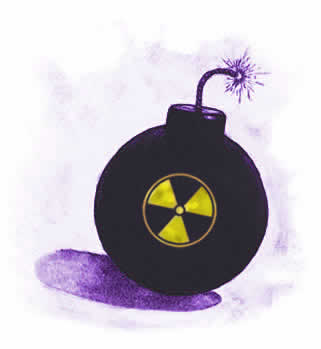 It is clear that the effects of what is happening in Libya will not stay confined to North Africa. Instead, the “Libyan problem” will undoubtedly have a long-term impact on many aspects of international affairs.

“38 North” has discussed the potential impact of Libya’s experience on North Korea’s nuclear ambitions in an insightful article by Ruediger Frank. I would like to continue looking at this issue, but from a broader angle. Beyond North Korea, what effect will Libya’s fate have on the future of the Nuclear Non-Proliferation Treaty (NPT) and the nonproliferation regime as a whole?

After all, Pyongyang and Tehran are not the only countries in the world that will take extract lessons from Libya’s experience, but many countries around the world will do so as well, including “nuclear threshold states.”[i] One of the fundamental questions that can be derived from Libya’s experience is whether or not small countries today have the right to implement policies based on their own national interests and priorities, but with which the Western world disagrees?

The answer to this question would seem to be negative. Everything happening now in the Arab world shows that if a political regime does not fully meet so-called internationally approved standards of democracy, and a country has valuable natural resources, then military force may be used against it to overthrow the ruling elite and replace it with a more “loyal” new government. As a rule, instability within a country serves as an “invitation” for external interference into a state’s internal affairs and open revolt of the opposition against the current authorities sets the perfect stage. If that happens, any excuse for the beginning of military interference can be chosen such as  accusations of human rights violations, overreaction to peaceful protests, or even a rise in rebel “insurgents.”

The way representatives of the “free world” changed their attitudes toward the regime of Muammar Gaddafi—rapidly and simultaneously—is worth considering. After all, just a few years ago in December 2007, the Libyan leader paid a prestigious visit to Paris, where he met President Sarkozy twice and in 2009 he had friendly talks with the G-8 leaders at a summit in Italy.

The eccentric Libyan leader has demonstrated an anti-American policy for 40 years and has never been a favorite of the West; but at the same time, he has been relatively tolerated and accepted—the colonel was never an “outlaw” from “civilized society,” unlike the North Korean leader Kim Jong Il, nor was he ever attributed to the “axis of evil.”

Moreover, eight years ago Gaddafi abandoned the idea of possessing nuclear weapons in order to become closer to the Western world and let inspectors enter his country. He also settled all issues linked with the compensation of families of victims of the Pan Am Flight 103 bombing, of which Tripoli was accused of perpetrating. Indeed, the international sanctions against Libya were removed. But the moment the Western world believed a more acceptable alternative to Gaddafi’s regime could be found, it did not hesitate to start an operation to overthrow his regime.

It is difficult to say what the West won in the short-term when it abandoned all written and unwritten agreements with Tripoli and provided support to the opponents of the Libyan leader.  More importantly, this was a strategic defeat for Western democracies from the very start.

First, the Libyan case demonstrates that the principle of the national sovereignty is becoming ever more an illusion, and the security of any state, even one that is part of the UN system and observes all the norms and principles of the international law, is not always ensured by political means. The Libyan colonel made a big mistake when he decided to make concessions to his external opponents in order to obtain a “writ of protection” from them.

The Libyan example may also influence other countries that now find themselves unprotected. Through their actions against Libya, Western democracies have discredited the notion that the abandonment of nuclear weapons by any “threshold state” would strengthen its own security—something they have been promoting for decades. Like it or not, countries now face a choice: either accept the loss of real sovereignty or look for asymmetrical responses to global challenges, which could plausibly include creating a nuclear arsenal.

North Korea clearly chose the latter route. According to the statement made by a DPRK Foreign Ministry spokesman on March 22, 2011:

The present Libyan crisis teaches the international community a serious lesson. It was fully exposed before the world that ‘Libya’s nuclear dismantlement’ much touted by the U.S. in the past turned out to be a mode of aggression whereby the latter coaxed the former with such sweet words as ‘guarantee of security’ and ‘improvement of relations’ to disarm itself and then swallowed it up by force. It proved once again the truth of history that peace can be preserved only when one builds up one’s own strength as long as high-handed and arbitrary practices go on in the world. The DPRK was quite just when it took the path of Songun and the military built up in this course serves as a very valuable deterrent for averting a war and defending peace and stability on the Korean Peninsula.

Indeed, Pyongyang has many more external threats to worry about than Libya. In the U.S. State Department’s annual Country Reports on Human Rights Practices, North Korea is presented as an “absolute dictatorship,” which “rejects the right of its nation to change its government.” Washington sees Pyongyang’s nuclear program and its export of relevant technologies to countries in the Middle East as a serious threat to American interests in Northeast Asia. Furthermore, North Korea is suspected of counterfeiting U.S. currency, drug trafficking, and other illicit activities. Though, unlike Iran and Libya, while North Korea does not have the resources that may interest the “free world,” it is still important due to its location in a strategically important area of Asia. The unpredictability of North Korea’s behavior, which plays by its own rules, creates a sense of military and political uncertainty that makes the implementation of Washington’s strategic tasks more complicated.

Even a small part of the above mentioned factors would have been enough for a decision to overthrow the Kim Jong Il regime had it not been for one “but”: the North Koreans have already obtained nuclear weapons, which was proven by nuclear tests conducted in 2006 and 2009. The biggest miscalculation by the United States was that it missed the moment when it could have prevented this situation, and now America has to deal with a nuclear-armed state, willing to fight to the end if any country attacks it.

The fact of the matter is unlike Gaddafi, Kim Jong Il realized after the Western interventions in Yugoslavia and Iraq that he would not get any effective guarantees for protection against possible aggression. No country—not even China—would fight for Pyongyang were this to take place, and thus the DPRK should rely only on its own military potential. The more unacceptable in the eyes of the “civilized world” this form of protection is, the more reliable it is for the security of such a country.

As a result, North Korea’s leader has prepared its country for an international environment in which all kinds of surprises are possible, and has secured the DPRK against any number of threats. Gaddafi overlooked these risks and lost. When backed into a corner, Kim Jong Il went all out to defend his sovereignty, ignoring protest from the “global community” over Pyongyang’s nuclear ambitions. The United States and its allies can express indignation over the outrageous moves of North Korea all they want, but have been unable to take any real steps toward reversing North Korea’s nuclear program; instead being forced to deal with North Korea as a de-facto nuclear power.

In closing, the lessons learned from Libya’s experience have the following implications for the future: