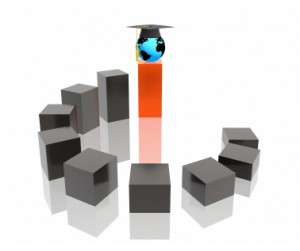 Not too long ago, I met a diplomat assigned to North Korea. Through the DPRK’s Ministry of Foreign Affairs (MFA), his country awards scholarships to North Koreans to spend a year studying agriculture abroad. In our discussions, the diplomat complained that the candidates nominated were so far below his expectations that his government was planning to cancel the scholarship program. Most of the candidates hardly spoke English, were over 40 years old, and were far more interested in preaching juche than doing well in their programs. Diplomats from other countries have recounted similar experiences.

Their negative experiences seem strange to me when Beijing University professors have told me that their North Korean students are routinely top of their classes, in Chinese, at what is one of the most selective and competitive universities in China. So what is the root of this disconnect?

Choson Exchange, of which I am a part of, runs a scholarship program for North Koreans to study overseas, focusing on business and political economy. Although we identify with many of the problems that other academic exchange programs have run into, our experiences with candidate selection have been different from what these diplomats experienced.

For our program, we are currently conducting second round interviews and are generally pleased with the quality of our candidates. What we have found is that good partners and good procedures lead us to an incredible pool of people under the age of 30. One candidate could articulate, in English, the merits of various fiscal schemes for attracting investors and different legal measures to combat corruption. Another speaks two foreign languages fluently without ever having lived abroad. Yet another initiated university exchanges between North Korea and other countries. Given their caliber, I could easily imagine some of these people as my classmates at Yale University, engaging professors in tough discussions on development policy.

As with all things North Korea, we can only speculate as to why we were able to find people of such dynamism and intelligence. We hope to describe the process by which we selected people, the “pressures” we faced along the way, and the principles that might have led us to these bright young candidates. At the core, we believe that access to the many bright and hardworking young North Koreans is possible if an organization adheres to a process that is selective. Some exchange programs award opportunities to go abroad to those with whom they have a business relationship or outsource the entire selection process to North Korean partners out of expediency. These are assured ways of recruiting mediocrity.

In our case, since our educational focus was on business and economy, our scholarship review committee included representatives from top-tier global management consultancies. These representatives helped us to identify North Korean institutions that were focused on training young people, and that were considered “best-in-class” in their field in North Korea. We asked these institutions to nominate candidates for scholarships. The concept behind this was to ensure that institutions were willing to put forth their best candidates so as to not lose the scholarship opportunity to a stronger candidate from another institution.

Eligible candidates had to have been less than 30 years old, from the selected institutions, and were requested to participate in an informal interview. We tentatively chose candidates according to the following criteria:

We emphasized to the North Korean institutions that we were under no obligation to offer scholarships if the quality of candidates fell below our expectations. We told our North Korean counterpart that we wanted candidates who could perform in the top-quartile of a regionally-recognized university and that high quality candidates were essential for continued interest from any university.

The process had its hiccups. Initially, we emphasized the need for a first-round resume screening, but were unable to obtain any resumes until the final day of the first recruiting trip. We requested interviews with several candidates but our counterpart tried to drive us toward his “preferred” candidates. At the same time, we recognized that security clearances for interviews make this requirement burdensome and in the end, we had to settle for group interviews instead of the one-on-one interviews we had initially envisioned. When we insisted that there would be a written test, our counterpart said a friend of his wanted to take the test “just to show how good his knowledge of finance is.” We assumed that this friend would share the content of the test with “preferred” candidates to ensure that they were chosen. These issues were not hard to overcome, although they delayed the process considerably, forcing us to make a return trip to interview more candidates.

Speculating on this experience, we believe that choosing good candidates is similar to choosing good investments. One has to adhere to the following principles:

Given the high costs of full-length academic programs and the limited number of people we can support, we have to invest in only the “best and brightest.” This requires that we dedicate effort to selecting the people who best deserve such opportunities. We are waiting for feedback on the first batch of people we brought abroad to refine our process.