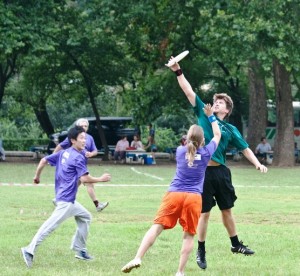 It’s February [2011] and I’m chatting with Karin Lee, the Executive Director of the National Committee on North Korea in her Washington, DC office. We’re ruminating on the usual things, I’m banging on about my Ph.D. research, talking about Choson Exchange, offering my cautious opinion on the Korea-watching scene, and general public opinion in the United States… when for some reason that memory can’t recall, it comes to light that we both play ultimate Frisbee. (Actually, sadly, “Frisbee” is a registered trademark. Even more unfortunately, this has left the sport officially called “ultimate.”)

“You should totally organize an ultimate tournament in North Korea,” Karin says.

“Right, that’s what I’m gonna do,” I say. Actually, that’s inner monologue. I really say something like, “that’s an interesting idea.”

She says, “Get in touch with Simon at Koryo Tours,” whom we both know, “and see if he’s up for it.”

“Sure.” We exchange amicable goodbyes and I cycle back home to watch Al Jazeera and see what’s happening in Egypt.

I give little thought to it until an email arrives from Karin, asking if I’ve done it and I think, okay, I’d better write Simon, so I can at least say I’ve tried. I email him and get an swift response. “Why not?” he asks, by way of endorsement.

It isn’t often one gets to combine one’s professional and recreational interests. I know someone who is a surgical technician and collects Armenian crosses, for example. He struggles to pair the two in a tasteful manner. And here I was being given the opportunity to not only introduce the sport that I love to people who have never seen it, but also to go see the mass games for the first time and introduce the DPRK to my wife. We settled on the end of August—before schools start back up, but while the Arirang festival would be in full swing. Now all I would have to do is convince 20 or so ultimate players that a tournament in Pyongyang would be a good idea.

It wasn’t too hard, between the power of social and Frisbee networking. Curious emails began pouring in. “Is it safe?” was the most common question. On the Facebook page, many wall posts expressed disbelief or suspicion. In retrospect, I shouldn’t have put the page up in early April.

A few posters expressed disgust that we would go to Pyongyang to play ultimate. Someone pointed out that we would only get to play with elites; I thought about replying that in global terms, anyone who can spend $2000 to travel abroad and throw a bit of plastic around is very much an elite. I didn’t.

Ultimate, self-refereed, encourages good spirit in a way that most team sports don’t: there’s no cheating the ref—if you cheat, you’re cheating your peers. The social shame that comes with cheating is strong and conversely, the kudos given to fair-spirited players is high. Most people thought it was a fantastic idea to introduce a game so dependent on cooperation and fairness to North Korea. In the end, 19 of us set off from Beijing on a shiny new Air Koryo Tupelov, choked down (or didn’t) the weird orange curry thing that was lunch and touched down at Pyongyang’s Sunan Airport. I promptly celebrated our arrival by leaving my passport on the plane and had to ask the terminal staff to go back and get it for me.

Time was short, so we hustled to the Yanggakdo Hotel to check in before heading to the mass games. We were all staying on the 35th floor, and the elevators seemed to be controlled by some strange algorithm that ensured the maximum number of stops to allow pushy Chinese tourists on or off. Sometimes two elevators would open on the same floor at the same time. Often, they would open on the way down and the would-be passengers would be gone already. The A/C was broken, making the 10-minute round trip journey even tougher to bear (temperatures generaally hovered in the low 30s centigrade). Still, we managed to get ourselves checked in, wolfed down some surprisingly tasty dinner and then re-boarded the bus to head to the May Day Stadium, which from exhaustive Wikipedia research I know to be the world’s largest.

North Koreans are rightly proud of the Arirang mass games. Mass gymnastics have their roots in the early 20th century nationalist movements in Czechoslovakia and Germany and were embraced by later communist regimes, but the Koreans have taken it to an unprecedented level of showmanship. It is obvious why they want to show it off to foreigners. It is an emotive performance: two lovers’ separation as described in the song “Arirang” is used as a metaphor for the divided nation. After illustrating the lovers’ woeful tale, the story progresses from the tribulation of colonialism, through the salvation as provided by Kim Il Sung, and then onto the unstoppable successes of the Korean people, who achieve one victory after another, while always yearning for their brethren on the other side of the 38th parallel. 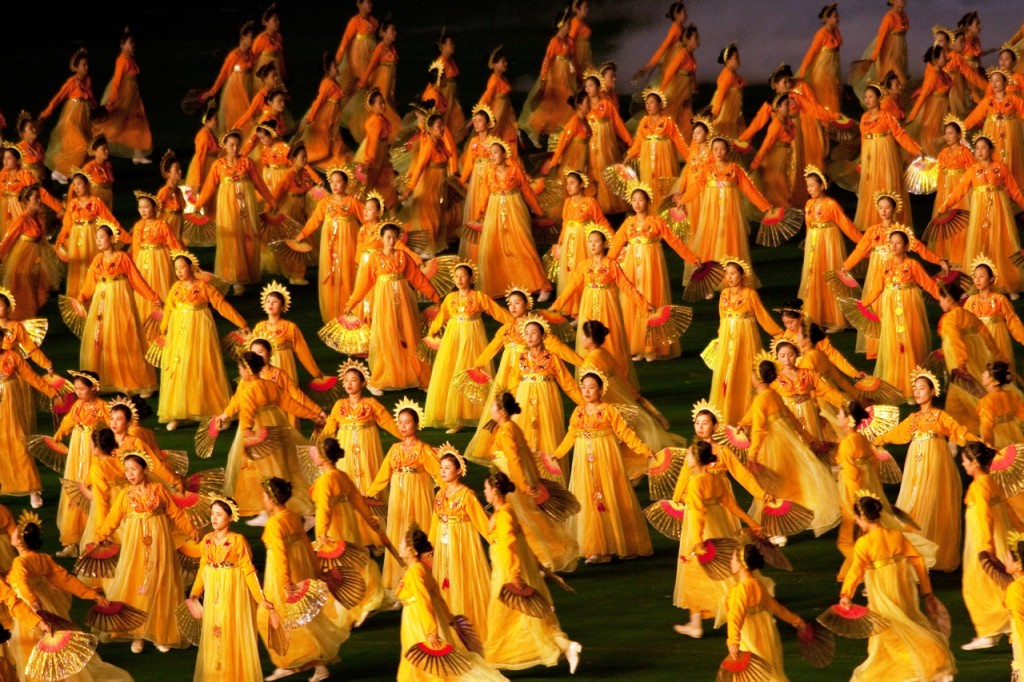 Almost involuntarily, one finds oneself convinced of the tragedy—which it no doubt is—and then thinking, “C’mon Korea, you can do it! Grow those vegetables! Build that industry!” before pausing to think about some of the other storylines that are being ignored in this rendition of history. The same forces are at play when politicians tell a story about a specific kid with leukemia, rather than merely describe the pros and cons of a policy. It is important to make people feel something before trying to convince them of something rationally.

The next day, after a quick trip to the mausoleum of Kim Il Sung, we tore off our ties, put on our sports apparel, and arrived to find a truly enchanting spot for a game of ultimate. I was concerned that the location would be somewhere tucked away and isolated, but instead we were in the shadow of Mt. Taesong, next to the south gate of the old fortress. On the other side of the field stands a small rollercoaster park.

It happened to be a youth holiday, and all of Pyongyang had come out to play. Army units and civilians rode the fun fair rides, a group of men played volleyball and soccer, while a group of 100 or so youths played games like tug-of-war and that other one where you run a relay race, spin around ten times at one end, and then get confused or fall over on the way back (to the laughter of those whose turn it isn’t). In this relaxed atmosphere, we set about making the field, organizing teams, and explaining the basics of the sport to the dozen-or-so Koreans and handful of Pyongyang expats who joined in. The Koreans were all employees of the Korea International Travel Company or university students on internships. 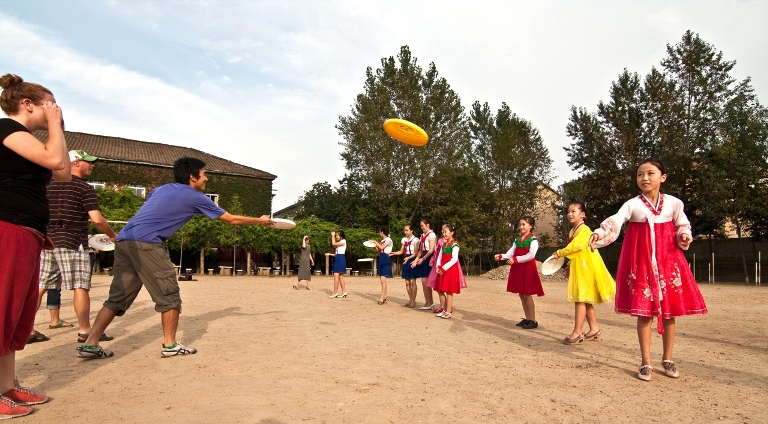 The ultimate was gangbusters. We were witness to the first North Koreans to score in the history of the sport, as well as the first North Korean diving catch. A couple of the locals really got into it, playing intuitively and competitively. It could have been a tournament anywhere in the world. Everyone played hard and with the “Spirit of the Game,” the cultural leftover from ultimate’s hippie roots. I never thought to bring up to our Korean teammates that the sport initially flourished in the anti-establishment subculture of the late ‘60s and ‘70s. I think we said it was Canadian.

One had to remind oneself that it was supposed to be a surreal experience. Well, okay, there were some unavoidably trippy moments: a herd of deer being guided through the park, for example, or several of the participants being part of Neil Strauss’ pickup-artist community. They were in country for a longer and one presumes, by their standards, atypically conservative holiday. (Neil, incidentally, was scored on twice by girls. I’m not saying that means anything. But maybe it does.) 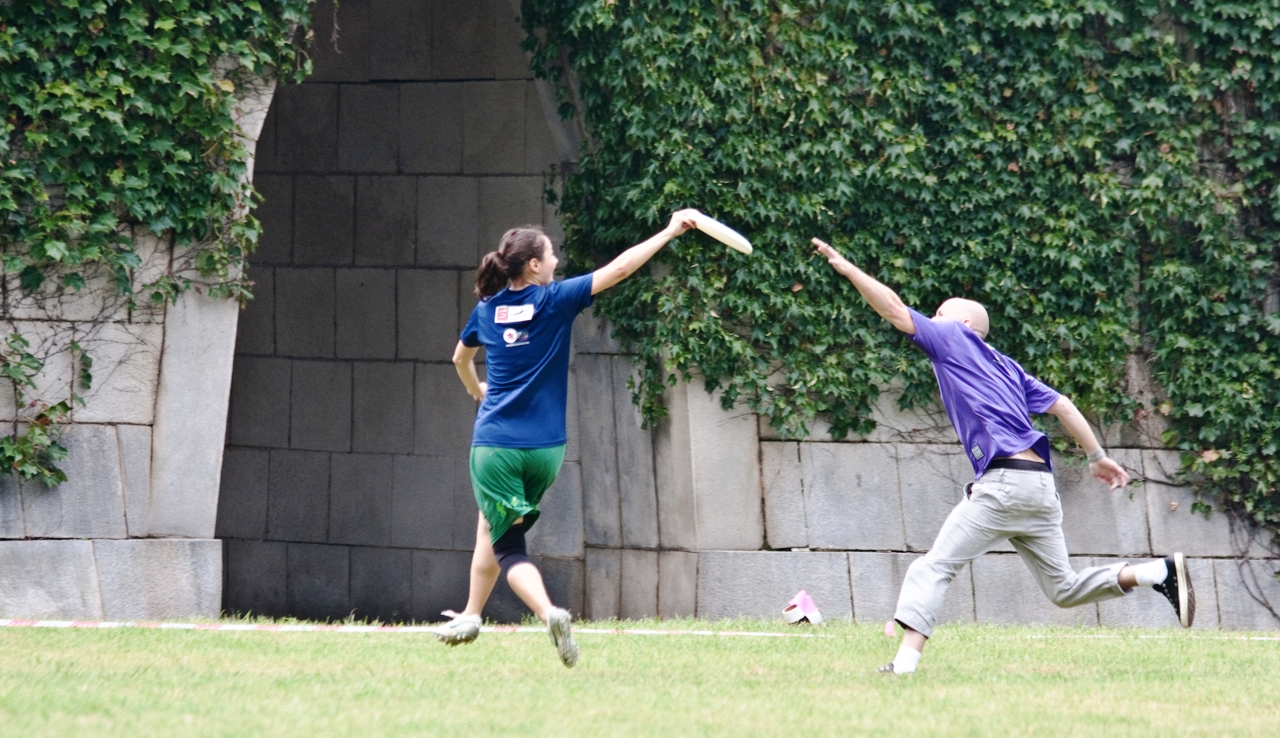 Overall though, it was so normal. When I later showed video of the event to a South Korean friend, he kept asking, “Are you sure those are North Koreans?” While playing, one forgot that in the morning we were at the gigantic tomb of a beloved man who ruled the country for almost fifty years and whose embalmed body still inspires tears in many of his visitors. Or that just three hours drive southward stand American soldiers—some of the participants’ distant relatives, likely—staring across an imaginary line at the relatives of some of the other participants.

I’m tempted here to make some trite and sweeping conclusion about the power of sports—we’ve read them before, of course, often connected to the corporate marketing extravaganzas of the Olympics or World Cup. I tend to be cynical about all that, though I would never deny that sports inspire deep emotions in people and help craft our societies. On this day, what it inspired was a feeling of normalcy. Strange to think that “normal” can be at the same time “inspirational,” yet that’s what it was.

(For posterity, Kim Guk Chol is the first North Korean to score a goal in ultimate. The tournament-winning catch was made by Kim Gwang Hyok.)