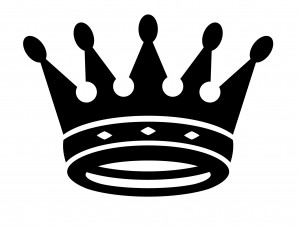 Kim Jong Il is no more. The state news agency KCNA reported that he died on his train on Saturday, December 17, 2011. He was on his way to offer another round of on-the-spot field guidance, working himself to death for his beloved people. This is the official version that we have actually seen under preparation for quite a while, including in works of art that we discussed in a recently published book.

The public was informed rather quickly, less than two days later. Kim might in fact have died much earlier. In a system where the death of a living dictator is a taboo topic, it is questionable that all necessary arrangements had been made in advance. It takes time to agree on a detailed funeral list with 250 names in strict hierarchical order, an obituary praising the right aspects of his rule, and a precise schedule of instructions for the immediate period after the ruler’s demise. Most importantly, a far-reaching decision had to be made on how to proceed—and how to announce the successor.

The matter was complicated by the fact that Kim Jong Il himself had failed to finish the succession process. This was most likely to happen next year, when the country would celebrate the 100th birthday of its founder Kim Il Sung in April 2012. The status of Kim Jong Un would have been elevated at the yet unannounced 7th Party Congress. It is fair to assume that Kim Jong Il’s death at this point in time came as a surprise for the North Korean leadership, too.

In this situation, the Worker’s Party took over. In a highly symbolic move, it acted like the Church in medieval Europe: it crowned the Emperor. The obituary, published in the Party newspaper and signed by the Central Committee, devotes its latter part to the introduction of Kim Jong Un as the next leader—as the “great successor” (widaehan kyesŭngja). This is the first time he has been explicitly named as such. Note also that the complete sentence says he is the great successor to the revolutionary cause of chuch’e—not sŏn’gun. This is an emphasis on ideology, the realm of the Party. The Military First Policy is duly mentioned, but it does not stand at the center. 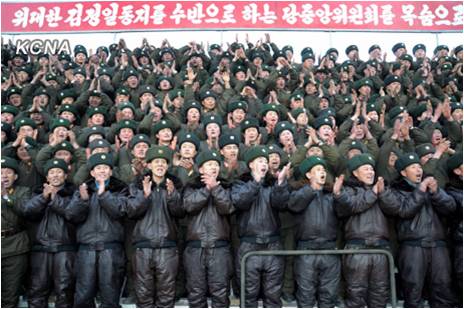 The resuscitation of the Party’s leading role in society has been visible for a few years. Among the last hints was a group picture taken on December 13, 2011 during one of Kim Jong Il’s last field guidance trips. It shows a banner reading: “Let’s defend the Central Committee with Great Leader Kim Jong Il at its top with our lives!”

This is a remarkable deviation from earlier versions, according to which soldiers were supposed to defend only Kim Jong Il. Now it’s the Central Committee—a collective, symbolizing the Party. The order of institutions signing the official obituary published by the Central News Agency supports this analysis. It lists the Central Committee of the KWP first, followed by the Central Military Commission of the KWP, the National Defense Commission, the Standing Committee of the Supreme People’s Assembly (the parliament), and the Cabinet of the DPRK. How more obvious can the real power structure be?

Interestingly, this is not a short-term development. A look at the titles used for Kim Jong Il in the state media in the past years (see graph) confirms the growing importance of his Party function since about the time of his alleged stroke.

The big question now is will the North Korean elite and population accept the Central Committee’s decision, and will they welcome Kim Jong Un as the new leader? History teaches us that things do not always proceed according to plan or conventional wisdom. We cannot exclude the possibility of ambitious individuals testing the opportunities. With Kim Jong Il’s death, North Korea lost the Secretary General of the Worker’s Party and the Chairman of the Central Military Commission, but there still are: an official Head of State; a Standing Committee of the Politburo, of which Kim Jong Un is not a member; a National Defense Commission, also without Kim Jong Un. There are powerful individuals like Choe Yong Rim, Prime Minister; Kim Young Nam, Head of State; Jang Song Thaek, Kim Jong Il’s brother-in-law and alternate member of the Politburo, and his wife and Kim Jong Il’s sister Kim Kyong Hui who is a regular Politburo member and a General. Ri Yong Ho is a Vice Marshal. Will they back up Kim Jong Un, or try to manipulate and sideline him?

Among the weak points of Kim Jong Un is that he is young, inexperienced, and lacks an official endorsement by Kim Jong Il. Such an endorsement would not have been a guarantee of acceptance, but it would have helped greatly. However, his strong point is that he is almost the only person who can reliably create the illusion of continuity. Having learned from the experience of Eastern Europe, the last thing the North Korean leaders want to create is the impression of a wind of change. They know that change is like a drug: the more they give to their people, the more they will want of it until in the end, the situation gets out of control. This is the nightmare scenario for all those who benefit from the status quo in North Korea. Therefore, the Party took the risk to present an inexperienced and unknown young man as the new leader—who, nevertheless, is Kim Il Sung’s grandson and Kim Jong Il’s son. This must suffice as a qualification for now.

That game is not risk-free. In Korea, as elsewhere, personal ambition can override rationality. The slightest power vacuum can create an irresistible temptation to fill it. It is thus not surprising that in official KCNA announcements, the succession by Kim Jong Un is repeated like a mantra.

China seems to understand that game and is more than willing to contribute its share. Hu Jintao himself visited the North Korean embassy and expressed his support for Kim Jong Un. This is an important signal. It tells the people of North Korea that aid will keep coming, and smashes the hopes of Chinese backing for potential rebels. Unlike in 1956, when China supported the Yan’an faction in its failed coup against Kim Il Sung, Beijing’s top priority now is to maintain stability. Anything else comes later. There might be hopes that the young Kim Jong Un can be manipulated; the Soviets harbored the same illusion about a 33-year-old Kim Il Sung in 1945.

What comes next? As quickly as possible, every space on propaganda posters, in the media, and in people’s minds will be filled with Kim Jong Un until there is no other choice but to proceed with him, lest the dangerous impression of potential for change will be risked. According to Gregory Henderson, Korean politics is all about competition for control of the center—not about competition against the center. In other words, the key question regarding domestic politics in North Korea now is not whether Kim Jong Un will be the next leader, but what type of leader he will be.

For the time being, it is unlikely that he will replicate his father and grandfather. Rather, we expect a collective leadership formed by the Party with Kim Jong Un as its head. He will be supported by senior figures from the Party, the military, and the government. How much room this will leave for him and his ideas remains to be seen; much depends on his personality and this, we just don’t know well enough yet.

It would also be fair to expect a wave of purges against actual or potential opponents. This happened in the past, too. In the coming months, continuity and consolidation will be the name of the game. We will see Kim Jong Il being placed next to his father—in propaganda, and probably even physically in the Kŭmsusan memorial palace. Kim Jong Un will emphasize how he will govern in the spirit of these two immortal leaders. To show his filial piety, he will award a posthumous title to his father and show proper mourning by not accepting any title for himself for three years. This mourning period will give the elite time to figure out how to deal with the young Kim without triggering impatience among the population. If everything remains quiet, the 7th Party Congress would be held after three years and further cement the rule of Kim Jong Un by making him the Secretary General.

In an ideal case, this will mean that Kim Jong Un becomes a leader of the Chinese type. Reform and opening Chinese style—a one Party dictatorship together with a market economy—could be the consequence. However, the risk in Kim Jong Un’s case is his young age. He will not die naturally anytime soon, and he is unlikely to give up his post easily after a few years. As he gets used to power and more experienced in the power game, his ambitions will grow. The old generation will make room for handpicked younger officials who depend entirely on Kim Jong Un. The Party is strong now; it might get weaker in the future. The classical power struggle between worldly and spiritual leaders in medieval Europe fills many volumes of books. So the Party in North Korea now has the crucial task to ensure that enough checks and balances are provided to prevent the young ruler from becoming another Kim Il Sung. This is what we will have to look at when we observe North Korea in the next months.

Many open questions remain. But one thing is obvious: North Korea, a nuclear state, now stands at a major juncture in its development.