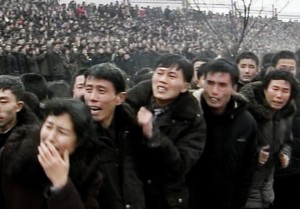 The question consistently asked by journalists over the past weeks is whether the weeping and wailing that accompanied the death and funeral of North Korean leader Kim Jong Il is the product of stage management or a genuine outpouring of grief. In other words, how real are the tears?

To our secular and cynical Western sensibilities, it seems inconceivable that a nation would be moved to tears at the death of what we believe to have been an evil tyrant who ate lobsters and caviar while his people starved, who squandered the nation’s wealth on nuclear weapons while soliciting humanitarian aid, who operated a network of brutal prison camps and kept the entire population isolated from the outside world. Why is there no nationwide rejoicing? Should we not see people dancing in the streets of Pyongyang? As is often the case when dealing with North Korea, our simplistic questions require more complex answers than time allows in journalistic interviews.

The way in which all humans respond to emotional events has a lot to do with our perception of history, politics, economics and the culture in which we are embedded. North Korea is not what we consider to be a modern, secular, capitalist society in which the individual reigns supreme. Although it describes itself as a revolutionary society, the DPRK is not revolutionary in the style of the French, the American or even the Russian revolutions. Kim Il Sung and his compatriots fought an anti-colonial struggle against foreign domination. There was never the sense of fighting against an indigenous corrupt or oppressive ruler, and North Korean propaganda continues to justify a “revolutionary” attitude and the need for a powerful military as one that is aimed against foreign domination.

Although the likeness of Marx and Lenin still preside over Kim Il Sung Square in central Pyongyang, and Kim Il Sung received the tutelage of both Stalin and Mao, the Juche ideology that he developed into a state doctrine bears little resemblance to the communist manifesto of Marx and Engels. It might better be understood as the reestablishment of a monarchical Korean nationalist system. In other words, the people of North Korea have passed from a feudal monarchy by way of a brutal Japanese colonial rule into a newer version of a monarchy by a different name.

Combine this with the fact that most North Korean citizens have been cut off from access to independent information about the world beyond their borders—not only national borders but even internal provincial and county borders—and one begins to comprehend why North Korean refugees have such a difficult time adjusting to life in South Korea and elsewhere.

Beyond—or beneath—the political and economic superstructure, there is the cultural bedrock of shamanism and Confucianism, overlaid with Buddhist and later Christian influences. The primary goal of Confucianism is education for social harmony. It regards the natural order to be hierarchical. Relationships among people are structured as loyalty bonds between, for example, husband and wife, father and son, ruler and subjects. Loyalty is demonstrated through the carrying out of duties. And although it is the duty of the ruler to be just, it is not up to the subjects to evaluate the ruler’s behavior. A son must obey his father whether or not he understands or approves of his father’s motives.

Although Kim Il Sung adopted Lenin’s injunctions against religion, the Christian faith of his mother taught him that religion has a powerful influence in people’s lives. He sought to harness this power in a personality cult that would solidify his rule. Shamanism has many gods. Buddhism has no gods, Christianity has one god. Juche has one leader with god-like qualities.

Kim Il Sung embraced the economic centralism and political structures that he learned from his Soviet educators, but also sought to differentiate himself from their exclusively materialistic world view. Juche communism claims to fulfill not only the material, but also the spiritual needs of the people by emphasizing the communal nature of human beings. The individual exists only in relation to the whole, as an integral part of the community. A good life is a life lived knowing one’s place in the scheme of things. The heroes of the revolution that are celebrated in every walk of life are those who accomplished heroic deeds in service of the community.

Even the leader does not reside outside the comprehensive notion of Juche. The Great Leader Kim Il Sung and the Dear Leader Kim Jong Il derive their authority from their “great exploits” on behalf of the Korean people. They work “indefatigably” for the nation. They die from exhaustion in the midst of fulfilling their duties to the people. Kim Il Sung died having just signed a document on Korean reunification. Kim Jong Il died while on a trip to impart on-the-spot guidance in the provinces. The leader becomes synonymous not only with the North Korean people as a whole, but with the entire Korean nation. In other words, serving the needs of the leader is indistinguishable from serving the nation, because the leader exists to serve the nation. Soldiers pledge to become “human bombs” for the leader. The North Korean Women’s organizations call on women to have more babies so they can sacrifice themselves for the leader.

Whether we regard this ideology or the propaganda surrounding the leaders as myth or reality is entirely beside the point when it comes to assessing the authenticity of tears at Kim Jong Il’s funeral. North Korean children are institutionalized at a very early age, in many cases before they are weaned. The first word that children learn to say is the equivalent of “father.” However it is not their biological father that is meant. They are taught to point to the image of Kim Il Sung on the wall when they say it.

Nurseries and kindergartens throughout the country have special “education rooms” where children sit around a large table that has a model of the birthplace of the leader under glass. On the walls are pictures that tell stories in the life of the leader. The children memorize the stories. When foreigners visit, the teacher will ask questions whose answers the children have learned to recite. I saw such rooms indoctrinating children about the Great Leader on my first visit in 1985. When I returned in 1997, each institution had a second room, this time dedicated to the Dear Leader.

This type of education continues in grade school and high school. The Young Pioneers learn to work for the leader on weekends. Practically all the songs they learn have some relationship to the leader. Political education continues into adulthood as a daily and weekly occurrence, always related to the thought of the leader. It should be kept in mind that there are very few North Koreans who still remember life before the foundation of the DPRK. This system of education has been in force for over 60 years. Reverence for the two faces on the wall of every North Korean living room is their “normal.”

The question (is) whether people really believe what they are taught is legitimate. But it assumes that we are rational beings unaffected by emotion. At some point in any person’s psychology there is a choice to be made with respect to realities that we cannot control. The less one is aware of alternative realities, the easier it is to conform. And even if one is aware, opting in favor of conformity is not an irrational decision when faced with the dramatically undesirable consequences of non-conformity.

The more blatant the contradictions are between our expectations and our lived reality, the more emotionally taxing conformity becomes. But a belief system such as Juche can ease the resulting psychological suffering. Becoming a true believer is an emotional, not a rational process.

Refugees and defectors have given us interesting insight into the emotions aroused by the death of Great Leader Kim Il Sung in 1994. There is no doubt that for the majority of North Koreans, his death came as a very unpleasant shock. The initial outpouring of grief from large urban centres to the smallest villages was very real indeed, even though the prolongation of the grieving period gave way to more contrived, theatrical expressions. (In her book “Nothing to Envy: Ordinary Lives in North Korea,” Barbara Demick devotes a chapter entitled “Twilight of the God” to reactions to the death of Kim Il Sung.)

Although more than 17 years have passed, during which the people of North Korea have experienced a major decline in their standard of living, as well as a reduction of services that the central government is able to supply, I believe the tears shed at Kim Il Sung’s death are instructive for an understanding of the tears shed at his son Kim Jong Il’s passing.

First there was surely shock when the news was announced. Many of us DPRK watchers were shocked, even though we knew well of his illnesses and knew that his days were numbered. The timing could not have been worse, coming right before the year in which the 100th anniversary of the birth of his father would be celebrated with great fanfare. Since “the centre” has always been shrouded in utmost secrecy, North Koreans don’t even know how many wives or children Kim Jong Il has had. Even the elite is now faced with many imponderables: Who will be in charge? What group will have influence? How should one be aligned? Will stability be maintained?

The lower classes, having experienced a major famine after the death of Kim Il Sung, will surely be worried about their sheer survival. The two men whom they were taught to revere since childhood, the two faces on every wall, are no longer in charge. Compared to these two, the young man now proclaimed as the leader is a virtual unknown. For the many who believe in the basic benevolence and wisdom of their leader, this must surely be a psychologically most distressing event.

If they have not already shed a tear in the privacy of their homes, the spectacle of public mourning would surely open the floodgates of tears. Assembled in the courtyards of schools, universities, factories, offices, statues and official mourning sites, the sense of being part of a community in mourning would come to the fore. Watching and listening to your friends and neighbors weep is bound to affect you as well.

Real tears are always genuine. What prompts the tears to flow is a secret of every heart. My wife did not shed a tear when her mother died last year. But several months later, the sight of a tree being cut down in her garden, branch by branch, set her to weeping until the last piece of wood had been carted away. Drama schools teach aspiring actors to reach deep inside themselves for past personal tragedies when the script calls for tears.

The expressions of grief that the cameras have recorded in North Korea seem real enough to most observers. Were the tears shed out of grief for the death of Kim Jong Il? I have no doubt that in many cases they were. But I also assume that most of the mourners were pondering their own fate, their own mortality, the death of their own relatives, the future of their own children at the dawn of a new era, as they allowed themselves to be swept up in a communal, cathartic expression of grief.

By the time of the funeral, ten days later, much of the weeping would have become standard issue conformity. It would look bad not to show one’s grief on a national day of mourning. It would not be a good example for one’s children if the parents do not show proper respect for their ancestors or the country’s leaders. And beyond that, during a period of uncertainty, it would not be wise to stick out like a sore thumb.