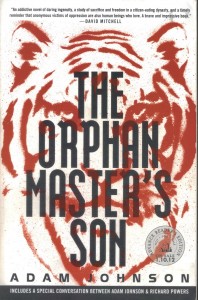 The range of topics for authors is endless, the techniques of story telling as diverse as the stars in the sky, limited only by what eyes can see—with or without reading glasses—and the public’s brain can comprehend.

All of this applies in spades to Adam Johnson’s new book, The Orphan Master’s Son. Many readers are blown away by its pyrotechnic, shape-shifting, picaresque (choose one or all) approach. It may, indeed, be the best book of the year. The reviews are stellar. All the same, there is a little-noted fly in this ointment, and it is this: For some reason someone decided somewhere along the line to sell the book as a window into North Korea.

That, decidedly, it is not.

If readers like the writing, like the plot twists, like the characters, then good on them. But the book is packaged, touted, and sold as “insight” into North Korea. Someone ought to stand up and gently point out that it isn’t. It might as well be me. I’ve written a few stories set in North Korea, and I’m happy for some company. Let me be clear. What I’m mainly concerned about here is the sales pitch, not the book itself.

We might begin with a simple fact. The author of the book admits he knows next to nothing about North Korea. That would be the end of the problem, except he doesn’t follow through and simply clam up on the subject in his public remarks. How could he set a book in North Korea and say nothing about the country in all the interviews and book tour appearances? That’s a dilemma, but solving it by letting North Korea be the sizzle for the book isn’t the answer. That may be the publicists’ idea. It may simply have been a decision that came out of thin air. No doubt, it wasn’t such a difficult decision to make. If no one knows anything about North Korea, if everyone is equally ignorant, then there is no danger, and certainly no harm, in taking everyone for a nice ride, is there?

We’ll put aside that the setting is cardboard (very thin cardboard, at that) heavily salted with factoids taken from the Internet. It is as if—and this is probably not an accurate description of how the writing went, only how it looks—the author had a pile of notecards with the names of North Korean products, streets, and factories and threw them in at the appropriate places in order to show familiarity with his subject.

I sympathize with the problem. In one of the Inspector O books, the setting for a key section was a town on the border between North Korea and China. Not having been there, I sweated the details. Finally, I decided simply to invent an entirely new town next to the existing one and give it a made-up name. That was an author’s prerogative, I figured, especially since I never attempted to suggest it was real. It only represented reality. Or rather, it crept up on reality, especially the part about the girls with long legs.

All of which brings us to the edge of the central problem. Does Mr. Johnson owe his readers an explanation that he does not really know much about North Korea? Surely he doesn’t have to do that in the book itself. The book, after all, is fiction, not social science. Even if Felix Mendelssohn had never been to Fingal’s Cave, I wouldn’t have expected him to put that in the liner notes, and I would still enjoy his symphony of the same name. It’s music, not a geology lesson.

Put it another way—Joseph Heller’s Catch-22 is a wonderful book about the absurdity of war. But no one reads it to learn anything about the history of WWII.

No, Mr. Johnson doesn’t have to do come clean in the book itself. But he has other opportunities—as do the publisher and publicists. In person, Johnson has a charming way—he does, actually, have a winning public mien—of doing an “aw shucks” when asked what he knows about North Korea. He admits he was there for all of a week—he seems not to remember exactly how long, so he often says “about six days”—in the autumn of 2007. This impresses critics and readers as a sign of his seriousness of purpose and familiarity with the place.

We can join in the applause at his going to Fingal’s Cave, so to speak, to put the details, faces, and texture of North Korea in his mind. But does a single weeklong trip to anywhere on the planet qualify a person to do much more than write part of a chapter in Fodor’s? All right, you say, the book is fiction! He doesn’t need a Ph.D. from the School of Oriental and African Studies to write about North Korea! He doesn’t have to pull a Gauguin and run off to North Korea to be able to write about the natives!

No, indeed he doesn’t. If all a fiction writer wants to do is sharpen his sense of place for the setting of a story, six days might do the trick. But again, let’s remember, this book is being sold not simply as a story set IN North Korea, but as a story ABOUT North Korea.

As for the rest of his knowledge of North Korea, the author himself says it comes from a few books, defector accounts, and the Internet. That a book seriously advertised as portraying the human condition in North Korea relies on the Internet for its grasp of the place is, or at least ought to be, startling. Not everything has to be from original, or even secondary sources, of which the Internet has some. But from third, fourth, and even fifth-hand sources? In his public appearances, Mr. Johnson occasionally says that if someone has access to an alternate Internet with additional information about North Korea, he would like to see it.

Part of the commonly accepted explanation knocking around the Internet has it that very little information is available about North Korea. Presumably, that makes it all right to make things up to fill in the gaps. Up to a point, of course, there’s nothing wrong with doing that—making things up—in literature. That is, after all, fiction. But taking the next slippery step and selling one’s imagination as reality, or even something approaching reality? No, even when it comes to North Korea, that is a bridge too far.

One of the book’s main themes is that North Koreans have no way of expressing themselves, that they cannot know an individual thought or feel an individual feeling, and thus this must be their voice, their emotional sounding board. This book, the author says, will tell their story.

But how could that be done, starting from where he does—a somewhat curious belief that the North Koreans have no art, and no understanding of the “essence” of anything.

That notion is not only sadly misplaced, it’s also the sort of idee fixe that fed a lot of foolish American newspaper articles in February 2008—only months after Mr. Johnson’s brief visit—when the New York Philharmonic performed in Pyongyang. The snide undertone of many of those articles at the time was that we Americans were bringing “real” music to the heathen. The joke, of course, was on everyone who believed such goulash. Certainly the musicians of the Philharmonic quickly realized it was not so. Their conductor, Lorin Maazel, did a brilliant job demonstrating how music cuts across the boundaries that political systems seek to create and touches the essence of who we are, who we all are, no matter where we live. Anyone who doubts this might take a look at the wonderful video of the violinist Isaac Stern teaching young musicians in China only a few years after Mao died.

There are a number of howlers in The Orphan Master’s Son and in the author’s discussion of North Korea in his interviews and public appearances. Taken together, they suggest that the prism of a particular, and perhaps not very well informed perspective has bent the “reality” the book seeks to portray. Once the moral juices start flowing, of course, it is hard to keep a sense of proportion or context. Once we create a world in which there are no longer shades of gray, once we are convinced we can shine a beneficent light into the corners where others dwell in what surely is utter darkness, well, then, the details all fall into place. Only, of course, they don’t. Nothing is ever so simple. If anything, the tragedy comes when literature makes us comfortable with our own stereotypes, when we are eased away instead of being brought face to face with the complexities of the world. Even—or especially—the world of North Korea.

Buy The Orphan Master’s Son, by all means. Read it for fun. Enjoy it or not. Just don’t imagine it opens much of a window into North Korea.