The missile we should be worried about isn’t the one North Korea is about to launch, it’s the much bigger one that’s hiding in plain sight.

North Korea announced on Tuesday, April 10, that it had completed preparations for this week’s satellite launch and a day later started fueling for a test that the United States says raises questions about Pyongyang’s desire to improve relations with the rest of the world. But more worryingly, Pyongyang also announced that it had begun a five-year program to develop even larger rockets, which could function as intercontinental ballistic missiles (ICBMs) potentially able to reach the continental United States.

Earlier this month, a South Korean newspaper reported an unconfirmed claim that a U.S. reconnaissance satellite had spotted a new North Korean rocket, probably at the Sanum Dong research and development facility in Pyongyang, where other long-range systems have been observed in the past. According to this report and others that seem to substantiate the North’s claims, this new 40 meter missile is 25 percent longer and has a larger booster than the Unha-3 rocket scheduled for launch this week. Whether this system is functional or a life-size mock-up remains unclear. While impossible to confirm, analyzing satellite images and photographs of the new launch facility, as well as displays at a museum in Pyongyang, seem to suggest that North Korea is developing an intercontinental ballistic missile with longer range and greater capabilities than the one scheduled for testing this week. And there’s a chance that this new, more threatening missile might even be on display in Pyongyang soon, for either the April 15 centenary parade for the late Kim Il Sung or the April 25 military founding day parade.

Is there cause to worry? In a word, yes. Before leaving office last year, Secretary of Defense Robert Gates spoke numerous times about the threat a North Korean ICBM posed to the United States. While a previous North Korean missile tested in 2009—the Unha-2—could potentially reach the United States, the even larger rocket in development will likely be able to carry heavier warhead payloads longer distances, an important attribute given the likelihood that Pyongyang’s nuclear technology may not be that advanced.

Some clues to this mysterious new missile can be found at North Korea’s new Sohae test center, on which construction started early this decade and where it plans to launch the Unha-3 rocket this week. Pyongyang has historically designed its gantries (launch towers) with a view towards accommodating future generations of rockets. For example, the Tonghae gantry at its old launch facility, was initially used for the 1998 launch of the smaller Taepodong-1 (TD-1) rocket, but also built to hold the later, larger Unha missile.

Figure 1. This picture, taken recently in Pyongyang’s Three Revolutions Museum, shows scale models of the Unha-2 next to the TD-1 rocket in the gantry. 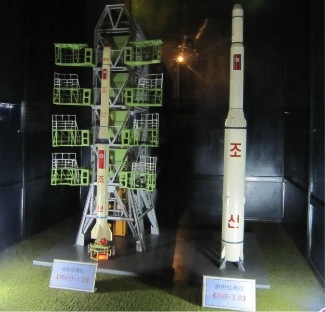 To launch the larger Unha rocket in 2009, the North Koreans added a fifth set of movable work platforms at the top of the gantry shown in figure 2.

Recent photos of the new Sohae gantry taken by visiting journalists on April 8 show that it is designed the same way. In figure 3, the Unha-3 rocket is set on a seven-meter high mobile launch platform. The 30 meter-long rocket comes up to the second level of the fourth set of work platforms, leaving about 10 meters of the tower, enough to accommodate the reported new 40-meter rocket.

Figure 2. The Tonghae gantry used for the TD-1 and the same gantry with the addition of the fifth platform required for the Unha-2. 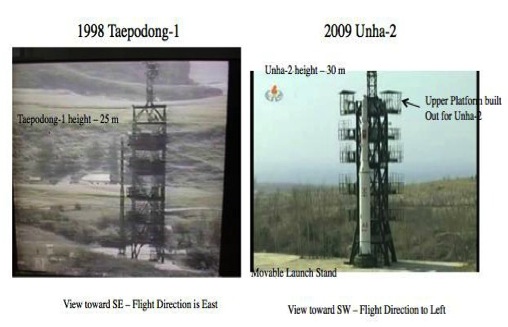 Figure 3.  The Unha-3, inside the gantry at Sohae, comes up to only the fourth set of work platforms. 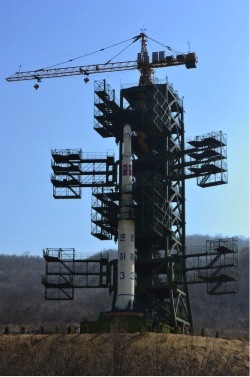 Sohae’s mobile launch pad provides another clue about the physical dimensions of the new North Korean rocket. The commercial satellite photograph in figure 4 shows this platform in 2008, while it was being assembled, with a four-meter hole in its center. Next to the mobile launch pad, however, there is a plug that reduces the hole to just 2.5 meters, enabling the stand to hold the Unha-3 rocket. But the plug can be removed to accommodate a larger rocket, like the one presumably planned.

Other clues can be found at the new launch site. Commercial satellite photography from 2006, when Sohae was still under construction, show that the number and size of storage tanks inside the large buildings near the launch pad that are used to store Unha-3’s first-stage propellants greatly exceeded what would be needed to fuel the rocket for this week’s launch. In other words, the tanks appear to have been built for a larger rocket. The same is true for the rocket engine test stand at Sohae, which is designed to fire larger, higher energy engines than the facility at the old Tonghae site, where the smaller Unha engines were tested.

Figure 4. Mobile launch stand and its plug under construction. 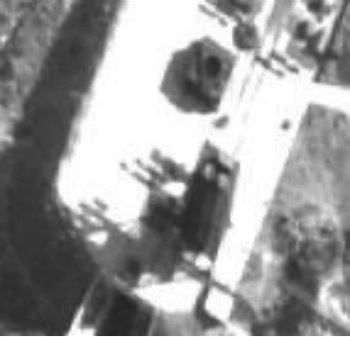 Pictures recently seen on display at the Three Revolutions Museum’s space exhibit in Pyongyang may provide another clue to the mysterious rocket’s existence and characteristics. Figure 5 shows a photograph of an artist’s concept of a large satellite launch vehicle and gantry tower. The rocket and gantry portrayed in this picture differ from the Taepodong-1 launched in 1998 and the Unha rocket tested in 2009 and soon to be launched this week. But is this just another piece of propaganda or a representation of a future large DPRK space launch vehicle?

It’s impossible to say for sure. The space exhibit is full of false or misleading claims, including that the two satellites launched during previous tests achieved orbit, which they did not. Another photo shows a Chinese satellite that the North Koreans claim as one of their own. On the other hand, both launch videos and models of earlier rocket tests are accurate. 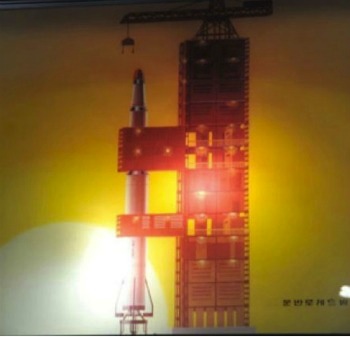 Assume for a moment, then, that the photo—propaganda though it may be—bares some resemblance to a future large North Korean rocket. The depiction of the confirmed gantry at Sohae doesn’t look quite the same, but let’s also assume that the dimensions are close. Given our detailed knowledge of the Sohae gantry from commercial satellite imagery, and now ground photos, the rocket in the picture can be roughly scaled to obtain its dimensions: about 38 to 40 meters long and 3.5 to 4 meters in diameter. The dimensions are similar to the large rocket reported by the press, the height of the Sohae gantry, and the diameter of the hole in the mobile test pad.

To carry this analysis one step further, a rocket of this size would be able to comfortably mount inside its first stage nine engines used by the Nodong medium-range missile—more than twice as many as the Unha-3 first stage.  The second stage looks to be 2.5 meters in diameter, similar to the Unha first stage, and could thus mount four engines.  The two stages alone would give the next-generation North Korean rocket nearly 450 tons of thrust, much more than the current generation of North Korean rockets and more than enough to power a highly capable ICBM or space-launch vehicle.

Of course, none of the information regarding the image in figure 5 is definitive. And information about North Korea’s WMD programs is scarce, even for governments watching Pyongyang closely. But the pieces of this unclassified puzzle—press reports, commercial satellite pictures of the new test facility, and exhibits from a Pyongyang museum—allow us to put together a more complete picture of North Korea’s new rocket than has been previously available. It also gives us a rare glimpse into Pyongyang’s future plans as it moves down the road to becoming a small nuclear power, a development that has major implications for international peace and security.

This article was concurrently published with Foreign Policy on www.foreignpolicy.com.