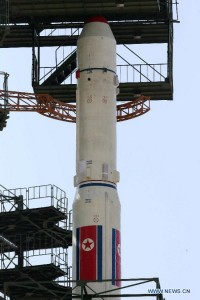 Three weeks have passed since the North Korean failed satellite launch and we’re still waiting for more information to accurately assess what happened. The United States, as well as Japan and South Korea, deployed many sensors in the region to watch the launch, and should have gathered very good data on what happened. However, it is unclear how much of that information will ever be made public, since countries tend to be very careful about releasing anything that might provide information about “sources and methods” of gathering information. However, I expect the basics of the event will eventually come out.

In the meantime, here is what we know:

North Koreans called this launcher the Unha-3 (Korean for “Galaxy-3”). Whereas US officials referred to it as a Taepodong-2 missile, since it appeared to be a derivative of a missile US intelligence first saw near the Korean city of Taepodong in early 1994.

North Korea said the three-stage rocket was intended to launch a small (100-kilogram) satellite, the Kwangmyongsong-3, into polar orbit. The satellite reportedly carried a camera to send back photographs of the earth, but the main goal was simply to try to place it into orbit and gain experience operating and communicating with it.

Photographs of the Unha-3 show that it was very similar to the Unha-2 that North Korea used in its failed April 2009 satellite launch. One noticeable difference is that it appears the Unha-3 carried more fuel in its third stage. This was to be expected, since the Unha-3 was launched from the new Sohae Satellite Launching Station (commonly referred to as “Tongchang-ri”) on the west coast to the south, rather than from the Tonghae Satellite Launching Ground (“Musudan-ri”) on the east coast to the east (as the Unha-2 was), to avoid flying over Japan early in flight (see figure 1). This change in flight path is significant because rockets launched east gain speed naturally from the rotation of the earth. Therefore, the extra fuel aboard the Unha-3 was needed to compensate for this difference when fired south. 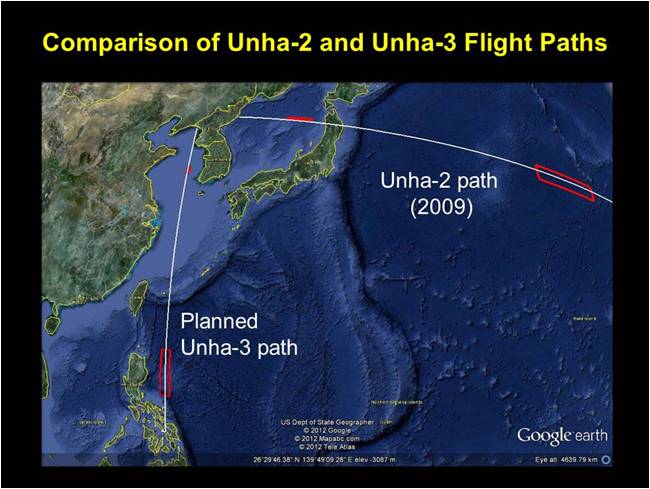 The Unha-3 launch took place on Friday, April 13, 2012 at 7:39 am Korean Standard Time (KST) (Thursday at 6:39 pm EDT) and failed shortly thereafter, with the rocket splashing down after traveling less than 400 km.

What May Have Happened

The engines of the first two stages of this rocket burn for about two minutes each, so knowing the exact time at which the failure occurred can help us understand which stages were involved and may give clues as to the cause. As of now, this information has not been released. As an alternative, we can try to glean this information from the reported splashdown zones.

From reports in the past three weeks, the two most credible splashdown locations are these:

A.  In a statement shortly following the launch, an official US report gave the splashdown point as 165 km west of Seoul. In particular, North American Aerospace Defense Command (NORAD) and US Northern Command stated that: “Initial indications are that the first stage of the missile fell into the sea 165 km west of Seoul, South Korea. The remaining stages were assessed to have failed and no debris fell on land. At no time were the missile or the resultant debris a threat.” This location would be roughly 300 km from the launch site.

B.  However, South Korean reports have said that the splashdown occurred 200 km west of the South Korean city of Gunsan. This location would be about 400 km from the launch site and just short of the intended splashdown zone for the first stage announced by North Korea before the launch.

Based on these two locations, we can conclude several things:

It is also possible that relatively large objects fell at both points A and B. In this case:

It is also possible that the launch was aborted by the command center before mechanical failure could fully set in. North Korea reportedly announced prior to the launch that the rocket was equipped with a flight termination system that would allow operators to shut down the engines manually if the ground station detected a problem. It is not clear whether this is the case. However, it is possible that if, as some sources have suggested, the first stage burned to completion but there was a problem with staging, that the North may have aborted the flight at that point.

What Would Help to Understand the Launch Failure

Four pieces of information that would help pin down what may have happened are:

What North Korea May Have Learned from the Launch

North Korea clearly did not learn anything about operating a satellite from this launch, since it did not succeed in placing the Kwangmyongsong-3 into orbit. Moreover, after several attempts, it still has not learned much about using the third stage to launch a satellite into orbit. The closest it has gotten to achieving this was its 1998 launch, when the third stage ignited and separated, but apparently then became unstable and broke apart.

Most countries launching rockets put sensors on all the major systems that constantly send back information about the status of the rocket during launch. If something goes wrong, sorting through this data can help experts determine what happened, like looking at an airplane’s black box. We don’t know how much “telemetry,” as this is called, the Unha-3 was designed to send back. Without it, Pyongyang would have little chance of understanding in detail what went wrong.

However, assuming the Unha-3 was sending at least some telemetry, how much could the North Koreans have learned? The first two stages apparently worked in the 2009 launch, suggesting that the rocket’s systems work in principle, but have reliability problems. The telemetry from the Unha-3 may tell them which system failed this time, and might give them enough information to reduce the likelihood of it happening again to that particular system. But the failure happened so early in flight that they would have gotten little or no information about the performance of several key systems in the upper stages.

On the other hand, it is worth keeping in mind that having a string of failures is not unusual for countries developing a launch capability, so it is difficult to draw strong conclusions from this failure about the overall state of North Korea’s rocket development program. For example, both of South Korea’s attempts (in 2009 and 2010) to launch a satellite failed, and the first stage of its launcher is built by Russia, which has a lot of experience with this technology.

However, North Korea’s successive failures coupled with other facts, like the lack of flight testing and questions about how reliant North Korea’s program is on foreign technology, does suggest a program that is less advanced than is widely assumed.