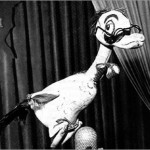 Once upon a time, there was a television show hosted by Groucho Marx called “You Bet Your Life.” Groucho would waggle his eyebrows and tell the contestants, “Say the magic woid (that’s how it came out) and the duck will come down and give you fifty dollars.”

For the past six or seven weeks, the duck has worked overtime. The “magic word” in North Korea is “belt,” and since Kim Jong Un’s maiden speech on April 15th, “belt” has been popping up with unusual frequency in the media. As far as belts go, there seems to be a lot hanging on this one.

The last time I checked in with you on these pages, I ventured that the political succession seemed on track in Pyongyang (see “The Paint Dries”). Now, a few weeks later, I’ll venture the same, with this addition: The plot has thickened.

To review, you may recall that in looking at Kim Jong Un’s April 15th speech, and a longer work from several days before, it seemed to me that the new regime was signaling plans to revisit something like Kim Jong Il’s 2002-05 economic reform policies. The real heart of that much-maligned effort was, I think, an effort to change resource allocations, redirecting at least some money, skilled manpower, and technology from the defense industries to the civilian economic sector. In effect, the aim was to alter the “military first” policy if not immediately to “military second,” then perhaps at least part way, to “military 1.5.” That effort seemed to have sparked an argument in the leadership at the time; it seems to have kicked off a similar storm now. How big that storm will grow, and what will be the outcome, of course we’ll have to watch and see.

To get back to Kim Jong Un, sticking to his guns in an April 27th work on land management, Kim seemed further determined to show that he was not going to cling to old ways on the economic front. In that work, Kim emphasized the role of the cabinet in devising and implementing economic policy; more to the point, he pretty clearly warned the party to keep its hands off. This notion of technical expertise over ideology, a riff on the old red vs. expert debate, was reinforced in a May 30th Rodong Sinmun editorial (not something to be sneezed at) that called on officials to have “enterprising spirit and thinking, scientific calculation and correct methodology and creative manner.” Lest there be any misunderstanding what these words meant, the editorial spelled it out. In order to work in a creative manner, officials needed to “get better acquainted with reality.” It is too soon to give this approach a label, but to some officials in the North, it may smell like creeping Dengism.

Belts. In a pivotal formulation in his April 15th speech, Kim suggested that the population should no longer be forced to endure past levels of economic sacrifice. In contrast to the standard image long used in North Korea that the people needed to find more notches in their belts, Kim expressed the party’s determination not to make people “tighten their belts again.”

Subsequently, in what looks to be a jaw-dropping contradiction to that injunction, a Rodong Sinmun article (May 30) advocating a strong military said:

Reinforcing military power, however, is not as easy and simple as it sounds. Funds, as well as up-to-date technology, are necessary. The work of reinforcing the military power is one that cannot succeed without a firm determination and tightening one’s belt .The party and the people of countries waging the revolution have to reinforce their military power in spite of all difficulties. (Emphasis added.)

Does this mean there is disarray in Pyongyang, that the regime is shaky or unsustainable? On that proposition I would not, myself, bet the farm. There was, after all, extended “debate” in the media—and one presumes behind the scenes in some form—on this same issue from 2002-05. For that matter, in the mid-1960s the same issue reared its head, only to be resolved in the 1966 Workers’ Party Korea (WPK) conference. At one point in the 1980s, there was in the WPK’s own journal, Kulloja, an article that sought to turn the case for military spending on its head, arguing that unless the masses had some stake in the system—something of their own to defend—they would not rally to the cause in times of danger.

That these hankerings among some in Pyongyang for increased spending on the civilian economy eventually went nowhere is neither surprising nor a reason to automatically say that they will fail again. Rather than barking at a future yet unseen, it might be more profitable at this point for outside observers (that’s us) to focus on what appears to be the current policy direction at the top, and to contemplate how that could shape developments and even provide openings for diplomacy if not now, then perhaps when the dust from the ROK and US presidential elections settles early next year.

Larger context. Trying to deal with separate threads can sometimes lead to confusion, because each one usually lends itself to several different interpretations. If the threads are drawn together into a working hypothesis, however, that at least it gives us something to test, more or less rigorously, as additional information comes in.

Here is a hypothesis. People can shoot at it as they wish.

Pyongyang realizes it needs peace and quiet externally for the new regime to establish itself and make progress on the economic front. It understands quite well that the Chinese are especially interested in having no trouble on the peninsula while they sort out their own politics. Finally, the North Koreans also know that continued tensions with South Korea work against the goal of a stable external security environment, though Lee Myung Bak in their eyes isn’t worth dealing with, especially given how few months he has left in office.

This is where the plot thickens. Some of what is most interesting is what the North hasn’t said. Masked by the North’s constant bombast against Lee Myung Bak, there have been, by contrast, what we might call significant silences in regard to the US. For example, Kim Jong Un’s April 15th speech was noticeably devoid of anti-US rhetoric. And the North has, so far anyway, avoided the big, fat target of news reports about the remarks—since clarified—by a US general that US and ROK commandos are operating in North Korea. If Pyongyang were trying to get into position to resume dialogue with the US, talking about reports of US Special Forces operating in the North is probably the last thing it would want to do.

The most significant silence so far, is not from Pyongyang but to the east, from a tunnel under the mountains near a place called Punggye. There have been what skilled photo interpreters judge to be preparations for a third nuclear test at the site, but so far, the earth hasn’t moved. In that regard, on May 22, a DPRK Foreign Ministry spokesman announced:

Several weeks ago, we informed the US side of the fact that we are restraining ourselves in real actions though we are no longer bound to the February 29 DPRK-US agreement, taking the concerns voiced by the US into consideration for the purpose of ensuring the peace and stability of the Korean Peninsula necessary for focusing every effort on the peaceful development.

The statement went on:

From the beginning, we did not envisage such a military measure as a nuclear test as we planned to launch a scientific and technical satellite for peaceful purposes.

Notice the reference to the February 29 agreement. You can take your pick on which is more important: That the statement said the North was “no longer bound” by the agreement, or that the statement raised the agreement at all. I suggest the latter wins, especially when placed in the following context.

In early April, at an German Aspen Institute meeting in Berlin, the senior North Korean delegate emphasized numerous times the importance of the two sides continuing with the Leap Day agreement even in the face of a North Korean rocket launch (see www.aspeninstitute.de).

This point was hammered home again—possibly as much for a select audience in Pyongyang as for external consumption—in a June 4 article in the pro-North Korean newspaper in Japan, Choson Sinbo. That article was an unusual tour d’horizon. (Few realize that James Church knows a little French.) A number of points in the article are well worth careful consideration. First, the article keyed off a February 15th memorandum by the DPRK Foreign Ministry’s Institute for Disarmament and Peace. That memo, in effect, was a primer on what might be termed the positive legacy from Kim Jong Il’s foreign policy. It reminded, for example, that in 2000:

…a special envoy of Kim Jong Il visited Washington and met the US president first ever in the history of DPRK-US relations, and a subsequent DPRK-US Joint Communique was announced. Following that, the US Secretary of State visited Pyongyang.

The memo also went on to point out:

The Japanese prime minister visited Pyongyang and a DPRK-Japan summit was held for the first time in the history of their relations, and a subsequent DPRK-Japan Declaration was adopted. This all had happened in the era of June 15 Joint Declaration. The West, which did not recognize DPRK for dozens of years, established diplomatic relations with DPRK all at once.

I’m not in favor of lifting too many quotes, but this particular Choson Sinbo article, by the normally well-briefed reporter Kim Chi Young, is too rich to pass up. Looking ahead to the time when the dust might settle, the article said:

The DPRK’s peace line will become clearer when the confrontational phase caused by the United States’ hostile acts opposing the peaceful satellite launch is settled and the 29 February agreement enters the implementation phase.

And reiterating the North’s understanding that the big powers want stability on the peninsula in 2012—an understanding that, according to well-placed figures in Beijing, the North Koreans articulated to Chinese counterparts as long ago as Kim Jong Il’s May 2011 trip to China, the article noted:

The response of the countries concerned wishing for the stabilization of the external environment during a period of power transfer—including China, which is slated to hold the Communist Party Congress this year, and the United States, which will hold the presidential election—is also a main variable influencing the situation.

A lot of threads. The question is, are they starting to come together? In this regard, one notes with interest that the Chinese seem to think they are, or might, or should. According to a June 5 Xinhua report, Cheng Jingye, China’s Permanent Representative to the United Nations and other International Organizations in Vienna, told the IAEA Board of Governors that, “Joint efforts should be made to revitalize the implementation of the Feb. 29 agreement.” Undoubtedly, it had not escaped Ambassador Cheng’s attention that a key provision in the Leap Day agreement was to send IAEA inspectors back to Yongbyon in order, among other things, to monitor a moratorium on uranium enrichment activity at a facility where sit some 2,000 centrifuges—a facility that, as far as is known, no outsiders have seen in over 18 months.

These threads don’t exactly form a tapestry. There may not even be enough here to darn a pair of socks. It’s much too early to see where the threads lead, much less to say definitively how they fit together, if in fact they do. But, as noted above, there is starting to be enough to lay out a working hypothesis, one that puts what the new North Korean leadership has laid out as its broadest, most significant economic goal—i.e., shifting resources from the military to the civilian economy—together with what seems to be its long-term foreign policy strategy—i.e., creating a stable external security environment most conducive to the economic goal.