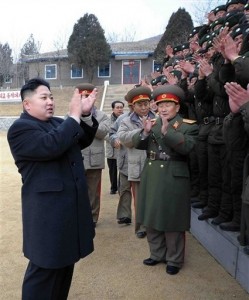 Has the North Korean power struggle reached a point of crisis? Are we on the eve of convulsions among the top North Korean leaders? These questions have emerged in the wake of Vice Marshal and Chief of the General Staff of the North Korean People’s Army Ri Yong Ho’s removal from all his posts.

Indeed, no one at the governmental intelligence bodies or numerous North Korea-related institutes at home (South Korea) or abroad were able to predict that Kim Jong Un, the young leader of the communist regime in Pyongyang, would remove one of his military strong men so swiftly. It seems that North Korea watchers and analysts have not only overestimated Ri’s influence inside the military, they have also overestimated his role. Our ignorance of what goes on in this secret regime is symbolic of the mystery surrounding North Korean policy.

Protected by an elaborate security apparatus, Kim Jong Un’s coup de main was, it appears, an unhindered success, although some North Korea watchers cautiously predict a possible insurgency from inside the military. Kim would seem to have an excellent chance to rule into the next decade, unless the North’s economy worsens over time. In particular, some liberal pundits outside of the government hold a similar view. Judging from the differing opinions among experts, it appears that beliefs about the stability of the Kim regime are closely related, although not totally determined by, whether the person or the medium is liberal or conservative.

At the beginning, the news media made it clear that there had been a split in opinions and differences in policy perception among North Korea’s powerful military generals on at least one set of issues: attitudes toward the young leader. Mr. Ri’s defeat seems clearly to have been an initial revamping of the ideologically ossified top generals. According to information that was leaked from a member of the National Assembly’s Intelligence Committee, Ri Yong Ho’s ouster was due to his uncooperative attitude as Kim Jong Un sought to tighten his grip on the military. Soon after this, it was announced that Kim Jong Un, the supreme commander of the North Korean People’s Army, had assumed the redundant title of Marshal, as if the young leader controlled the military entirely.

In North Korean history there have been many cases in which North Korean communist and military leaders all of a sudden ‘disappeared’ from the political stage. U Dong Chuk, once believed to be the director of the North’s secret police and spy agency, has never been mentioned in the communist regime’s news reports since mid-March. U’s absence from the spotlight was enough to prompt rumors about his possible execution.

But never before has a key figure like Ri Yong Ho, who the late Kim Jong Il had allegedly designated to help Jong Un win the military’s allegiance to smooth his succession, been removed with such lightning speed without at least providing details on Ri’s illness. Ri was one of the seven members who, during the funeral procession last December, joined Kim Jong Un as he walked alongside his father’s hearse through the snowy streets of Pyongyang.

Any judgment or analysis of this new phase in North Korean ‘external’ policy needs to take into account the context of North Korean domestic affairs as well. At first glance, the situation seems curious, or even paradoxical, given that the Politburo of the Central Committee of the Workers’ Party of Korea was convened on Sunday. But it is certain that Kim Jong Un still holds the reins of power. There is no serious domestic threat or political opposition to Kim’s rule. Most observers find it hard to imagine that the Kim family regime would fail in the near future. However, government intelligence sources seem to pose a different view, as South Korean president Lee Myung Bak strongly hinted recently: “Just as we can tell the sunset by the glow, reunification is near us.”

Intelligence analysts may have thought that a power struggle in the secretive regime would ‘provoke’ some opponents of the Kim family in the military to take some extreme actions, whereas the South Korean military intelligence body denied the possible armed clash in the course of arresting Ri. As reported in the JoongAng Ilbo, Jung Seung Jo, Chairman of the Joint Chiefs of Staff, stated firmly that there was no irregular activity in the North.

As far as I know, only limited information on North Korea is available among the related departments inside the South Korean government. Although they exchange views with others on the scene, it’s hard to believe that the information shared is completely without bias. Even when information personnel or other government officials meet with North Korean defectors, these people almost always get their information from ‘ordinary people’ in the North. They cannot convey the feelings of those who work at the heart of power. Given the paucity and ambiguity of information about the core power group, President Lee’s comments hinting at the collapse of the regime are not a surprise.

In the meantime, some North Korea watchers point out that the North Korean leadership has adopted a more flexible and moderate stance. They speak in terms of an “opening to the West,” strongly claiming the necessity to re-evaluate their current leadership. This change is reflected in the appearance of Mickey Mouse and a film clip of Sylvester Stallone as Rocky Balboa at a recent concert. Such other things as women dressed in skirts and high heels as well as the young leader’s approachable gestures of hooking arms with factory workers and soldiers are also the weathervane of a stunning change.

This contrast shows, however, that even North Korea analysts who have talent to think outside the box have forgotten one thing for a while: North Korea is a dynastic feudal system. The Kim dynasty has been on its throne for over sixty years, far longer than any other regime in the world. The regime has outlasted the many official and unofficial observers who, in 1994 when the North’s founder Kim Il Sung died of heart attack, were confidently predicting the regime’s imminent downfall.

Under the North Korean system, people are, after all, treated as tools and puppets to be moved at the leader’s will. For a more basic understanding of this unique regime, attention must be concentrated on the central issues before the young leader and his henchmen: how far and how fast to push reform and openness, and whether what has already been done should not be in part reversed.

Above all, North Korea represents iron dictatorship. Its people are still terrorized by an all-embracing network of secret police. They have been isolated to a large degree from the outside world. Great sacrifices are demanded of them to put the military economy ahead of their own standards of living, and these sacrifices are being justified by an alleged threat of a ‘US imperialists’ war. Riots are uncommon in North Korea, so to speak. The North Korean leader is commonly deified, as if he were a living god whose every pronouncement on every issue is unquestionable wisdom and holy dogma. That said, North Koreans are raised to believe that their leader is all-good and all-wise.

So it is unthinkable in North Korea that the leaders’ statues could be toppled from their pedestals, as North Korea recently claimed that it has arrested a man clandestinely dispatched by South Korean spy agents to destroy statutes of Kim Il Sung, the country’s late founding president and grandfather of Jong Un. While the South Korean government dismissed the North Korean ideological balderdash as propaganda, it is true that some defectors from the North have campaigned to topple Kim Il Sung statutes but with no implementation to date.

North Korea’s speedy and calculated response to these reactionary elements demonstrates that any kind of division in the North Korean leadership regime should be intolerable. From the available scanty evidence, it seems evident that only the Kim family has control over deciding important issues. For Jong Un, Jang Song Thaek, Jong Un’s uncle and vice chairman of the powerful National Defense Commission, and Kim Kyong Hui, Jang’s wife and a beloved sister of the late Kim Jong Il, are the sheet anchors who virtually hold sway. In particular, Mrs. Kim is believed to be the only testamentary executor of her brother. Therefore, unlike under the defunct Soviet regime after the death of Stalin, there is neither an opposition faction nor a strategic ‘swing’ group in North Korea. The Kim clan is likely to eliminate any semblance of a pluralism of power in an effort to strengthen the Party apparatus and secret police, whose sole political goal is to maintain as much as ‘Kim Il Sungism’ as possible.

In such a grim situation, the best thing for South Korea and the United States to do is to demonstrate to the North Korean regime that their policies toward the North are not founded on a hope for regime collapse. Given the presidential elections coming up in both the United States and South Korea, the North might even be more willing to listen right now, in the hopes that new administrations will not adopt a confrontational approach to Pyongyang. At the same time, Seoul and Washington need to play a long game, focusing on the long-term benefits of engaging North Korea, instead of paralyzing their policy by subjecting it to the vagary of the so-called Kremlin politics in the mysterious regime. Furthermore, based on the fact that the regime has succeeded against all odds, and contrary to most analyses, observers should be especially hesitant to believe that Kim Jong Un would fall anytime soon, as many  right-leaning pundits commonly think.

Men generally interpret the actions of others in terms of their own behavior and values. Riddled with insecurities, the Kim regime assumes that behind every South Korean and American intervention internationally, there must be a similar plot brewing for how to deal with the North. In truth, any attempt to understand the attitudes of the North Korean leadership must factor in long history of struggle for regime survival. For example, North Koreans have been led to believe that offensive measures taken by South Korea and the US in response to North Korea’s ‘self-independent policies’ are the product of aggressive tendencies inherent in the capitalist system unfamiliar to the North Koreans.

So I find it nonsense to believe that a deep-rooted mistrust and enmity that has taken over six decades to build will disappear through merely a few meetings or over the course of a few weeks. Even in the darkest days of the Cold War, the United States had close links to the Soviet Union. And yet the Lee administration  has cut all ties to its archrival regime. While struggling to avoid the inescapable lesson learned from history, the Lee government is instead busy building expectations for the poverty-stricken regime to collapse sooner than people assume. It is no exaggeration to say that the Lee government’s ignorance of the North has scuttled inter-Korean relations, although no one can say for sure how the unpredictable regime will survive.

Nevertheless, given that Kim Jong Un has successfully controlled the appointments of all echelons of the military and enjoyed their direct loyalty, and that Jang Song Thaek as the primary policy adviser to Jong Un and Kim Kyong Hui as a prop and stay of the Kim family hold similar positions in respect to the Party and the armed forces, the next South Korean president should make the political investment necessary to revive inter-Korean relations.

North Korea is standing on the edge of a seismic change. Rapprochement will come only if wise political leaders put a premium on strategic tolerance and proactively embrace the North as a ‘normal’ country rather than on the much-debated strategic patience. The good thing, above all, is that most South Korean presidential hopefuls know this.