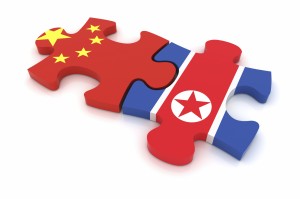 North Korea’s economic dependence on China may have reached an all-time high, but Kim Jong Un is determined to set a course for greater political independence from Beijing. This has left China in a state that one insider has referred to as ‘desperate’ over its rocky relations with the country since Kim Jong Un came to power. But given that Beijing’s priority is to maintain a stable and divided peninsula, it seems set to continue to bankroll its belligerent neighbor even as their once-close political relationship unravels.

China’s long-standing policy of “no war, no instability, no nukes” (不战、不乱、无核) on the Korean peninsula is also an ordering of its priorities. What China fears most is armed conflict resulting in a reunited Korea under a pro-US government in Seoul. A close second would be large-scale unrest causing a mass influx of refugees across China’s northeastern border. Ranking behind these two priorities are concerns that North Korea will increase its nuclear capability. While China would prefer that the North take steps towards denuclearization and end its provocative behavior, it is prepared to live with a nuclear North Korea as long as the arsenal remains small and this nuclear status does not result in an arms race or an expanded US military presence in the region.

Things got off to a rough start for China and North Korea immediately upon Kim Jong Il’s death, which came at a bad time as Beijing was entering its own leadership transition. China nevertheless rallied on behalf of Kim Jong Un, calling on key Western and regional countries to support stability. Beijing also reached out to North Korea with significant food aid and sent Vice Foreign Minister Fu Ying to Pyongyang. Chinese state media supported the transition with highly positive coverage—to the point that it came under domestic criticism for painting too rosy a picture of bilateral relations.

But Beijing’s early attempts to woo Kim Jong Un fell on deaf ears, leading Chinese experts to question whether their privileged relationship had eroded. Kim Jong Un repeatedly rebuffed invitations to visit China, and instead sent high-ranking officials to Singapore, Indonesia, Laos, Vietnam and Myanmar to try to drum up investment. Even worse, Pyongyang informed Washington of its plans to hold a satellite launch five months ahead of time, long before it notified Beijing. This angered China, particularly considering the difficulty it was having to meet the new North Korean leader.

Breaking with recent practice, China responded with a series of rare public admonitions. After Pyongyang announced its satellite launch, China’s foreign ministry came out with the strongest criticism of a North Korean provocation since the nuclear test in 2009. In April, China also agreed to a UN statement to strongly condemn the satellite launch, making no attempt to defend Pyongyang’s “peaceful use of the outer space” as it had done in 2009. In private, Beijing chastised North Korea, hauling in its ambassador twice after Pyongyang ratcheted up its rhetoric against South Korea by threatening, for example, to “reduce to ashes the rat-like Lee Myung-bak group.”[1]

China’s frustration reached its height on May 8 when the North Korean navy detained 28 Chinese fishermen in the Yellow Sea and Beijing was unable to get clarity for several days on what had happened. By the time the fishermen were released on May 20, the bilateral relationship had come under intense criticism in China’s blogosphere. Netizens called on the government to cancel aid to North Korea, reigniting a public debate in China over close relations with Pyongyang that had reached a nadir in 2009, when the North conducted a nuclear test near the Chinese border. Chinese leaders were deeply concerned by this outburst of public anger, much of it aimed at Beijing for its failure to punish its unruly neighbor. But it was also evident that some of these frustrations were shared by China’s policymakers. One Chinese analyst stated publicly that if Kim cared at all about relations with China, he would have simply shot someone over the kidnapping incident.[2] Zhang Liangui of the Central Party School sent an ominous warning that if North Korea didn’t issue a statement explaining the incident “the Chinese people would remember.”[3]

In spite of Beijing’s frustration and fears about the political relationship, its economic support for North Korea continues to increase unabated. In June, China issued visas to 20,000 North Koreans to work the northeastern province of Jilin. The bulk of their wages will go directly to the regime. An increase in coal and rare earth trade with China has allowed an infusion of cash into projects in Pyongyang, some of which bankrolled the “strong and prosperous” centennial celebration of Kim Il Sung’s birthday in April. Beijing has recently undertaken a $10 billion infrastructure project on the North Korean border to improve its access to an estimated $6 trillion worth of North Korean mineral reserves. The mid-August visit to Beijing by Kim’s uncle Jang Song Thaek resulted in a pledge by China to expand investment in border areas. Trade between the two is contributing to surprising signs of prosperity in Pyongyang despite robust international sanctions.

But China’s unconditional economic support for North Korea has brought few political returns. While the recent meeting between CCP external liaison Wang Jiarui and Kim Jong Un may have assuaged some of Beijing’s fears about the state of relations, China extracted less out of the visit than Wang’s earlier trips. In contrast to previous visits, there was no mention this time of any intention to resume talks on denuclearization. China has been trying to restart the Six Party Talks—of which it used to serve as host and chair—ever since North Korea withdrew in 2009. Kim’s comments were instead largely confined to reiterations of his desire to build the country’s economy, making it clear exactly what kind of involvement he expects from China.

Meanwhile, there are indications that North Korea is stepping up uranium enrichment and expanding its arsenal of nuclear weapons. China’s continued support for a regime that repeatedly violates Security Council resolutions while seeking recognition as a nuclear power will only exacerbate a problem that Chinese policymakers say they want to avoid: a regional arms build-up and stronger American military presence in the region.

Few signs have emerged that Beijing intends to reduce economic support to North Korea. Indeed China has shown in the past seven months that its interest in maintaining the North Korean regime and a divided peninsula is not contingent on good relations with Pyongyang. The late Kim Jong Il once said that China should have to pay for its buffer zone. Beijing seems quite willing to do so.

Stephanie Kleine-Ahlbrandt is China and Northeast Asia project director for the International Crisis Group. She is based in Beijing.