A 38 North Interview of Dr. Yoon Deok-Ryong with Mike Chinoy

“There are many people who are waiting for real policy changes in North Korea because the North Korean government or the leader has promised something bigger in the future. But we don’t see any concrete changes yet.” ~ Dr. Yoon Deok-Ryong 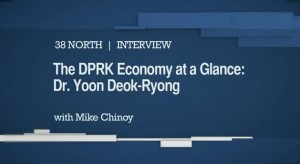 In this 38 North video, Mike Chinoy, Senior Fellow at the US-China Institute at USC sat down with Dr. Yoon Deok-Ryong, Senior Fellow at the Korea Insitute for International Economic Policy (KIEP), to discuss North Korea’s economy both as it seems now, and its prospects for improving in the future.

Part I discusses the internal dynamics of the North Korean economy including the overall structural deficiencies of the current system, and the challenges facing Kim Jong Un as he works to legitimize his rule.

Part II (07:37) takes a closer look at the evolving role of markets and foreign investment in North Korea, and their potential to bring about overall improvements in the system.

Dr. Yoon Deok-Ryongis a senior research fellow at the Korea Institute for International Economic Policy (KIEP). Currently he also works as a member of steering committee of the Korea Investment Corporation (KIC), Korea’s sovereign fund. He serves as a member of the advisory committee of Ministry of Foreign Affairs and Trade and Ministry of Unification. He was a member of the National Economic Advisory Council for the President. He also served as a Senior Advisor to the Minister of Finance and as a head of an evaluation team for public companies at the Ministry of Strategy and Finance. He is a member of several expert groups and advisory committees for diverse ministries and presidential offices in Korea.

Dr. Yoon was a visiting professor at the Paul H. Nitze School of Advanced International Studies (SAIS), Johns Hopkins University. He is also an invited professor at the Institute for Korean Unification Studies at Yonsei University. He received his B.A., M.A., and Ph.D. in economics from Kiel University in Germany. He was an executive director of PECC Korea and director general of APEC Education Foundation.

In addition to numerous papers and books, he is the author of “Asian Monetary Cooperation: A Search for Regional Monetary Stability in the Post-Euro and the Post-Asian Crisis Era” in Economic Papers (Bank of Korea 2000); “Searching for a Better Regional Surveillance Mechanism in East Asia” (HWWA, 2002); “The Role of Regional Development Banks: Financing for Development and Solidarity in East Asia” (Edward Elgar, London, 2003); “The Structure of North Korea’s political Economy: Changes and Effects” (KEI, Washington DC. 2004); “How to Finance North Korea’s Capital Requirements for Economic Recovery,” (East Asian Review, Vol. 16, No. 2, 2004); “National Financial Revenue and Expenditure of North Korea” (KIEP 2005); “A Roadmap for East Asian Monetary Integration” (KIEP 2007); and “The Korean Economic Adjustment to the World Financial Crisis” (Asian Economic Papers, 2010).