A 38 North Interview of Park Cheol with Mike Chinoy 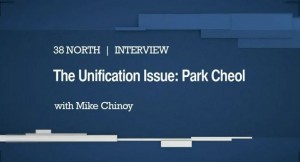 “Currently there is not much economic cooperation aside from the Kaesong Industrial Complex, but once inter-Korean relations are normalized and recovered, we expect economic cooperation between our countries to increase at least to the level of North Korea and China.” ~ Park Cheol

In this 38 North video, Mike Chinoy, Senior Fellow at the US-China Institute at USC sat down with Mr. Park Cheol, Director, General Policy Division, Unification Policy Office, Ministry of Unification, to discuss inter-Korean relations in this first stage of the Kim Jong Un era, and the MOU’s work to prepare for eventually unification.

Part III (07:34) discusses the current work of the Ministry of Unification, including steps being taken to plan for an eventual unification process.