North Korea may be moving to increase the size and sophistication of its nuclear arsenal. This escalation follows the demise of the February 29, 2012 reciprocal arrangement between Pyongyang and Washington, and North Korean statements that it will bolster its nuclear deterrent. Although uncertainty surrounds the North’s decisions, it is important to scrutinize Pyongyang’s current and projected capability to make weapon-grade uranium (WGU) and weapon-grade plutonium, the two key materials in building nuclear weapons. Despite the uncertainties, such an assessment contributes to better formulating how the United States should respond to North Korea’s nuclear programs, in particular its uranium enrichment program (UEP). 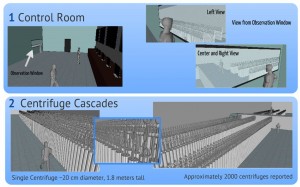 For years, great controversy has surrounded North Korea’s uranium enrichment program. How large is it? Has it made weapon-grade uranium? How much could it make in the future? But there are also other questions. What is the role of the UEP in North Korea’s overall nuclear effort? Is the UEP oriented to make 3.5 percent low-enriched uranium (LEU) for a civilian light water reactor (LWR) under construction at the Yongbyon nuclear complex, as North Korea claims? Or does North Korea intend to enrich uranium to a higher level for use in the LWR to make weapon-grade plutonium for nuclear weapons? Although LWRs are not typically used to make weapon-grade plutonium, they can do so efficiently through what is called a target/driver system if the reactor core is specially designed with uranium enriched to a level greater than 3.5 percent.

To address these questions, we surveyed available information about North Korea’s UEP and LWR. Faced with significant uncertainties, we evaluated a range of plausible scenarios about the past and possible future operation of the centrifuge program. We focused particularly on producing a range of estimates of North Korea’s current and future stocks of weapon-grade uranium and the future possible production of weapon-grade plutonium in the Yongbyon LWR. We then derived central estimates. The scenarios and all the estimates are detailed in a recent ISIS report, North Korea’s Estimated Stocks of Plutonium and Weapon-Grade Uranium.

Estimates of how much weapon-grade uranium North Korea could have produced during the last several years can vary a great deal in view of uncertainties about that program. According to our central estimate, by the end of 2011, the North could have had enough WGU for 0 to 11 nuclear weapons, where each weapon is assumed to contain 20 kilograms of WGU. Despite North Korea’s development and deployment of gas centrifuges, it may not have produced WGU, and thus a credible lower bound on WGU production through 2011 is near zero. The Yongbyon centrifuge plant could be the North’s first enrichment plant, although it likely also operated a pilot plant elsewhere. This assessment is based on the sheer difficulty of building and operating gas centrifuges and on North Korea having focused on building large numbers of centrifuges before deploying them. In several other scenarios, we assume that North Korea has a second, secret centrifuge facility. In these scenarios, North Korea could have made a substantial amount of WGU. The upper bound central estimate is that North Korea has enough WGU for 11 weapons.

Currently, North Korea’s plutonium inventory appears to be capped, with enough for 6 to 18 nuclear weapons and a midpoint of 12 nuclear weapons. This estimate is based on two factors. The first is that North Korea’s current stock of separated plutonium is estimated to be about 34 to 36 kilograms, which was produced in the cores of its now-disabled 5 megawatt-electric (MWe) reactor at Yongbyon. The second is that each weapon is assumed to use from two to five kilograms of plutonium.

Developing estimates of future production of fissile material is complicated by uncertainties in North Korea’s rationale for building a gas centrifuge plant. The UEP’s purpose may be less straightforward than producing 3.5 percent LEU for a civilian LWR or, for that matter, producing WGU for simple implosion-based fission weapons similar to its current plutonium-based weapons. In fact, the development of gas centrifuges provides North Korea with flexibility in increasing the size and sophistication of its nuclear arsenal.

The use of interlocking LWR and centrifuge programs is a technological risk, requiring North Korean mastery of a multitude of new engineering challenges. However, this approach would allow North Korea to utilize its existing family of plutonium-based nuclear weapons designs. Its rate of production of weapon-grade plutonium could exceed four-fold the rate of plutonium production in the 5 MWe reactor at Yongbyon, while still producing a sizeable amount of electricity. It could also use this LWR as part of a development program to build larger LWRs that could produce far greater quantities of electricity (and weapon-grade plutonium, if so desired).

In addition to providing a way to produce more plutonium, the UEP could also produce weapon-grade uranium for more advanced nuclear weapons. North Korea could use WGU in combination with plutonium to build weapons with a greater explosive yield than its current weapons, particularly if it conducts additional underground nuclear tests. The use of both WGU and plutonium could allow for more total fissile material in a fission device and a higher explosive yield than possible with plutonium alone. Weapon-grade uranium would allow for designs involving thermonuclear concepts that could not be achieved with designs only using plutonium. 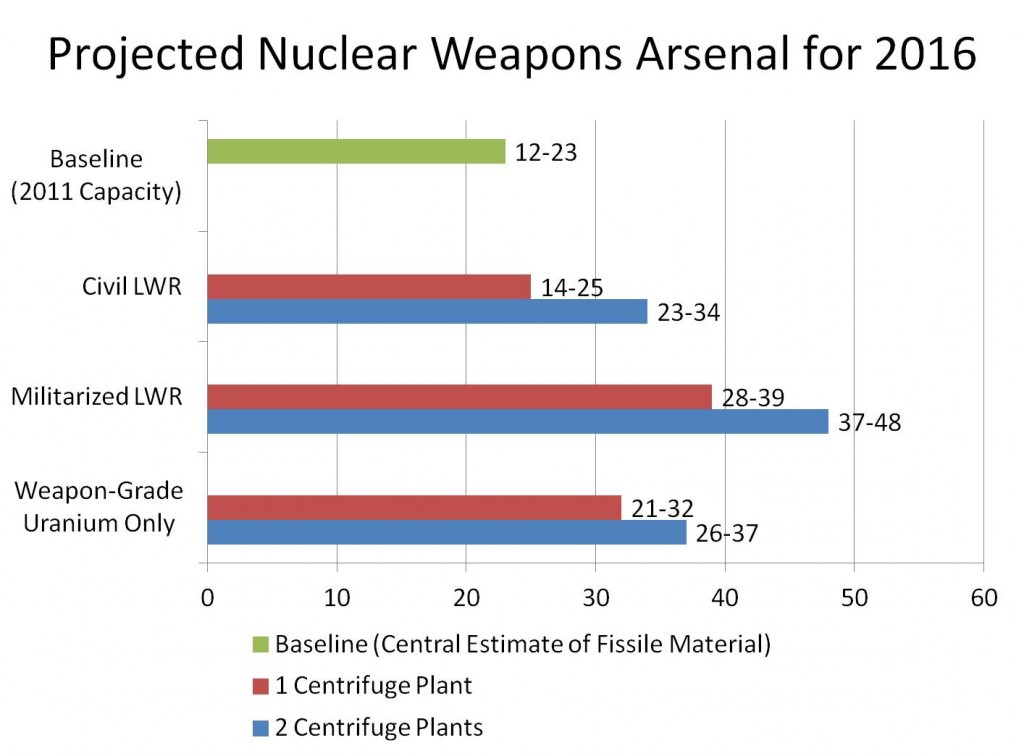 With the assistance of Houston Wood, a centrifuge expert and Professor at the University of Virginia’s School of Engineering and Applied Science, we evaluated three cases of future production of weapon-grade uranium and weapon-grade plutonium (and their weapons-equivalents) over the next five years—until the end of 2016. During this period, the number of operational centrifuges is projected to also increase. As expected, all of these projections, detailed in our report, show an increase in North Korea’s nuclear weapons arsenal. But there are important differences.

The three cases are:

These cases show that if the LWR is dedicated to making weapon-grade plutonium for weapons, in the longer term, North Korea could produce more nuclear weapons using this method than if it dedicated all its estimated centrifuge capacity to making weapon-grade uranium. However, this result must be tempered by the fact that the difference would be less if instead of 20 kilograms of WGU per weapon, only 15 kilograms of WGU were needed per weapon which may be possible for the North to achieve. Thus, given such uncertainties the relative differences between cases 2 and 3 should not be overly emphasized.

But in any event, cases 2 and 3 show that dedicating a significant portion of the centrifuge capacity to producing LEU for the LWR to make weapon-grade plutonium does not necessarily reduce the total number of projected North Korean nuclear weapons, compared to allocating all the centrifuge capacity to making weapon-grade uranium and not making any LEU for the light water reactor. If the LWR does not make weapon-grade plutonium and is solely dedicated to producing energy for civilian purposes, North Korea’s ability to increase the number of nuclear weapons would be significantly limited.

The current and projected estimates of stocks of weapon-grade uranium and plutonium have significant uncertainties. Regardless of these uncertainties, the current North Korean stocks of nuclear weapons may be larger than commonly believed. North Korea is also poised to increase its nuclear arsenal, perhaps significantly. Therefore, the United States and its allies should develop measures to head off this future potential threat. This strategy should include both an attempt to negotiate diplomatic solutions as well as increased efforts to detect, thwart, and delay North Korea’s nuclear progress.