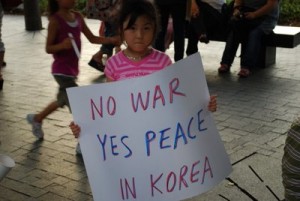 Reports coming from the Korean peninsula in the past few weeks have been disturbing and contradictory. On the one hand, tensions continue to escalate as Pyongyang and Seoul are locked in an upward spiral of threats to raze each other to the ground. This is the most severe situation since the 1968 Korean crisis, when the DPRK captured the US Navy spy ship USS Pueblo. Pyongyang’s suggestion on April 5, 2013, to evacuate foreign diplomats from North Korea for their own safety is also unprecedented.

On the other hand, the March 31 plenary session of the Korean Workers’ Party (KWP) adopted a policy of economic development to run parallel with a further build-up of the country’s nuclear forces. This event was followed by a session of the Supreme People’s Assembly (SPA), which re-appointed former Prime Minister Pak Pong Ju, a supporter of economic reforms, to head the cabinet.

These developments suggest that, rather than unleashing an all-out war, Pyongyang is in fact keen to develop its economy. Of no less importance is the fact that, for the time being, people in both countries continue to live their normal daily lives.

In analyzing the current Korean escalation we must specifically look at two major recent events: North Korea’s announcement on March 8 that it was invalidating the 1953 Armistice and all associated agreements with South Korea; and also Pyongyang’s cutting of military hotlines between Seoul and Washington.

International media reports have been primarily focusing on Pyongyang’s increasingly belligerent statements that an order had already been issued to deliver nuclear strikes against US military bases in different regions of the world and that North Korea is now at war with South Korea. This news certainly cannot leave anyone indifferent.

However if we discard emotions and scrutinize the North Korean documents that are being cited by the media, we will find the following. First, just as was the case with similar statements Pyongyang has made in the past, the fresh threats clearly state that any military action would be entirely reciprocal, only to be resorted to if the country was subjected to an outside aggression. For example, the Special Statement issued by the DPRK on March 30 “declaring” the state of war with the ROK pointed out the following:

If the U.S. and the south Korean puppet group perpetrate a military provocation for igniting a war against the DPRK in any area including the five islands in the West Sea of Korea or in the area along the Military Demarcation Line, it will not be limited to a local war, but develop into an all-out war, a nuclear war.[1]

Or the same statement regarding the US:

If they make a reckless provocation with huge strategic forces, the KPA should mercilessly strike the U.S. mainland, their stronghold, their military bases in the operational theaters in the Pacific, including Hawaii and Guam, and those in south Korea.[2]

The very strong warning and menacing statement issued by the General Staff of the Korean People’s Army (KPA) spokesman on April 4 was full of threats towards the US like the following:

We formally inform the White House and Pentagon that the ever-escalating U.S. hostile policy toward the DPRK and its reckless nuclear threat will be smashed by the strong will of all the united service personnel and people and cutting-edge smaller, lighter and diversified nuclear strike means of the DPRK and that the merciless operation of its revolutionary armed forces in this regard has been finally examined and ratified.[3]

However even in such case the final conclusion of this belligerent document looked like the appeal for a dialogue: “The U.S. had better ponder over the prevailing grave situation.”[4]

Therefore, there are grounds to perceive these public statements as a strong warning to North Korea’s opponents not to cross the “final line” and, in fact, Pyongyang does not appear to be harboring plans for a pre-emptive strike against its potential adversaries.

Moreover, in considering the risky game that has again brought the two Koreas to the brink of open warfare, we should assess the role of all the parties involved, and their contribution to the present standoff. The US and South Korea have been fueling the tensions with just as much fervor. In fact, while North Korea has so far been limiting itself to rhetoric (although admittedly fairly belligerent rhetoric), its opponents have been taking actual steps towards greater escalation of the conflict.

Washington’s decision to deploy interceptors in Alaska as a measure against a possible North Korean missile attack by Pyongyang’s non-existent intercontinental ballistic missiles is one such step. Another is the deployment of nuclear-capable B-52 strategic bombers (for the first time in many years) and a B-2 stealth bomber close to North Korea’s borders in the on-going joint US-South Korean exercises Key Resolve and Foal Eagle. The scenarios of these exercises include practice bomb runs to imitate nuclear strikes against North Korea. This is no longer just rhetoric but actual military activities aimed, among other things, at intimidating and demoralizing the opponent. Any country would view such behavior as an act of provocation, and would react accordingly.

It is also important to realize that the North Koreans have actually nowhere to retreat. Since displaying any sign of weakness will have a devastating effect, there must be no doubt left that it will fight to the end using all the means at its disposal in case an attack is launched.

However Washington and Seoul have recently announced plans for yet another exercise, a third one in the span of the last two months. It will involve the two countries’ Marine Corps troops and will last the better part of April. The exercise will be staged in a disputed sector of the Yellow Sea on the border between the two Koreas, roughly in the area where North Korean artillery bombarded South Korea’s Yeonpyeong Island in 2010 in an exchange of fire during a South Korean military exercise. China’s recent moves to increase its military presence along the border with North Korea may be a response to US-ROK military exercises as well as to emphasize that the PRC-DPRK military alliance treaty is still in force.

Regarding China, we are now witnessing an obvious contradiction in US policy. On the conceptual level, Washington is trying hard to persuade Beijing to give up Pyongyang as a troublemaker harmful to Chinese interests. However, contrary to what some in US policy circles may believe, the American deployment of additional forces near PRC territory and increasing the military threat not only to North Korea but also to China may have the opposite effect, compelling Beijing to postpone (or skip) addressing the actual contradictions in its policies—supporting a troublemaker—and its desire to punish an unruly partner in favor of consolidating alliance ties.

In the light of the current situation on the Korean peninsula, and in order to prevent the worst-case scenario, the international community should immediately and unambiguously call on all parties either side of the 38th Parallel to exercise maximum restraint and to weigh their actions against the possible consequences. As initial steps to stop further escalation all participants should first cool the highly belligerent rhetoric, reduce the scale of military exercises and remove them from direct vicinity of the DMZ and the most sensitive zones, such as disputed areas in the Yellow Sea.

The rapid aggravation of the crisis should remind us of the successful experience of direct US-North Korea “unofficial” contact in order to prevent the worst-case scenario. Many observers do not understand the importance of former US President Jimmy Carter’s visit to Pyongyang in June 1994, when in the course of intensive talks with the late North Korea leader Kim Il Sung, he succeeded in helping the Clinton administration escape a seemingly unavoidable military conflict and turn the situation in a positive direction.

From a broader perspective, we can also argue that empirical data in dealing with North Korea demonstrates the following: strong-arm tactics, isolation and sanctions alone, including the US policy of “strategic patience,” have failed to bring positive results and to stop Pyongyang’s nuclear and missile programs. To the contrary, only a policy of diplomacy and strategic compromise has proven successful. Talks placing the parties on an equal footing and taking into account their legitimate mutual concerns have succeeded in delaying or freezing the situation at different points in the development of North Korea’s nuclear program, and in some cases have even resulted in a cessation of nuclear activities. We should also not ignore a growing appeal to focus on nonproliferation in negotiations with North Korea, not disarmament, at the present time, while not abandoning disarmament as an ultimate, long-term goal.

Moscow has already committed to preserving peace in the region and has strongly urged stopping the dangerous rhetoric and military drills and working to create the conditions for restarting the Six Party Talks. At the same time, Russia has strongly condemned the decision at the recent KWP and SPA meetings to adopt the ordinance, “On Consolidating the Position of Nuclear Weapons State for Self-Defense.” The Russian Foreign Ministry emphasized that such step “extremely complicated the six-party talks resumption prospects.” Foreign Minister Sergey Lavrov, commenting on recent events in Pyongyang, outlined on April 5, “We maintain close contacts with our Chinese, American, South Korean, Japanese partners—parties to six-party talks.”

Of course Russia can play its conciliator role. Considering its historic strong interests on the Korean peninsula and vast experience as a mediator, now may be the right time for Moscow, working closely with its Chinese partners, to take an initiative designed to end the current tensions and help the concerned parties move back to more peaceful diplomacy and negotiation.