This article was originally published by Foreign Policy. The original can be found here. 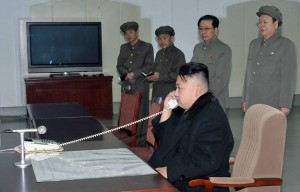 U.S. Secretary of State John Kerry’s visit to Asia is an important opportunity to start fashioning an off-ramp from the crisis on the Korean peninsula. “We are seeking a partner to deal with in a rational and reasonable way,” he said upon landing in Seoul Friday. But if Kerry is to succeed in his mission, the United States will need to discard two historical myths: that Pyongyang has used bellicose behavior to squeeze aid out of a cringing United States, and that the North always cheats on its agreements. This caricature is not only wrong but also hamstrings America’s ability to deal effectively with a dangerous adversary.

Exhibit A is the 1994 U.S.-North Korean Agreed Framework negotiated by Amb. Robert L. Gallucci, who was then my boss at the State Department. Under the agreement, Pyongyang pledged to dismantle its large plutonium production program and return to the Non-Proliferation Treaty in exchange for two light-water reactors and heavy fuel oil. Although the arrangement was reached after a crisis triggered by North Korean brinksmanship, the results were a success for U.S. foreign policy. At the time, U.S. intelligence estimates predicted that North Korea could build up to 100 nuclear weapons by 2000. Fast-forward to 2002, when the agreement collapsed, and the North only had fissile material for a handful of bombs. Moreover, key nuclear facilities had deteriorated so much that they could not be salvaged. The North still has not recovered from that setback.

As for the assistance provided to North Korea, even on that count Pyongyang came up short. Not only did the North Koreans trash their multi-billion dollar nuclear program, but all they had to show for it were two incomplete concrete-filled holes in the ground that can still be seen on Google Earth. No money was given in cash to Pyongyang. North Korea did receive a few hundred million dollars worth of heavy fuel oil under the framework agreement, but that seems a small price to pay for gutting a program on the verge of churning out 100 bombs.

Another deal, cited by a conservative scholar during our recent joint appearance on the Lehrer Report, was reached in 1998 when, according to him, “the Clinton administration paid North Korea almost $200 million worth of food aid for the empty privilege of inspecting an empty cave in the aftermath of North Korea firing a long range missile over Japan on Aug. 31, 1998.”

Since I led the inspection, I know what happened. The whole episode was a self-inflicted wound, not the result of Korean pressure tactics. The Clinton administration made a deal to inspect the “empty cave” when the conclusions of one intelligence agency that thought the North Koreans were violating the 1994 agreement by hiding a secret nuclear facility (most agencies didn’t think so) were leaked the to the New York Times. Even though the North Koreans warned American diplomats that there was nothing there, the administration had to cover its domestic flank. Sure enough, there was nothing there and there never had been. The intelligence agency’s analysis was simply wrong.

Food aid was indeed part of the deal, but the scholar neglected to say that the United States had planned to give it to the North Koreans anyway. The administration was not providing aid because of Pyongyang’s bluster, but rather for humanitarian reasons since the North’s population was suffering from a famine that may have killed as many as one million people. When the nuclear story broke, the decision was made to fold it into the inspection deal to avoid having to fork over any new assistance. That sounds to me like a smart move.

As a postscript, afterwards the Clinton administration reached a deal with Pyongyang imposing a moratorium on tests of long-range missiles and space-launch vehicles that lasted seven years until 2006. What did we give the North Koreans in return? The United States promised only to continue diplomatic dialogue, not to provide economic assistance. Just think how much worse the missile threat would be today if the North had not lost all of that valuable time.

Do the North Koreans cheat on agreements? Pyongyang’s pursuit of a uranium enrichment program beginning in the late 1990s violated the spirit of the Agreed Framework, but the United States detected these activities early on. Had Vice President Al Gore won the election, plans were already in place to confront the North. Unfortunately the George W. Bush administration did nothing and allowed the problem to fester. The North Koreans did, however, abide by agreements to implement the Agreed Framework. (Many covered the construction arrangements for building the two reactors and one established a joint U.S.-North Korea project to safely store spent nuclear fuel rods at its Yongbyon facility that contained plutonium.) The same applies to a host of other arrangements until the framework ended in 2002.The bottom line: Whether with the Soviet Union or North Korea, as President Ronald Reagan said, the key is to “trust but verify.”

Some may point to the February 2011 Leap Day deal that quickly broke down as an example of how you cannot reach agreements with North Koreans. But that episode was really a lesson on how knowing history is important. Even before the ink was dry, private experts noticed that the unilateral statements issued by Washington and Pyongyang allowed a big loophole, only banning “long-range missile tests,” a formulation the North had long insisted did not include space-launch vehicles. Sure enough, the North claimed the agreement did not cover space-launches, fired off an Unha rocket with a satellite on top, and the agreement collapsed.

The fact is diplomacy, if conducted with care, can and must play an important role in finding solutions, even with North Korea. Contact with the North Korean leadership can clarify its intentions in a way that cannot be done by parsing the words of Pyongyang’s bellicose press releases. We might learn that there are peaceful paths forward or that the North is indeed bent on confrontation. Either way, clarity is essential given the seriousness of this situation. Diplomacy is also an important tool in building coalitions; it could garner support from China, which is desperately interested in reinvigorating the diplomatic track, and also would be welcomed by our allies who have the most to lose from any confrontation with Pyongyang. That is certainly true for South Korea, whose new president has signaled her desire to reengage Pyongyang.

In addition to echoing public warnings against aggression, at the appropriate time, Washington could use meetings with North Korean diplomats stationed at the United Nations (the so-called New York channel) to signal a willingness to engage in unconditional discussions to see if there is a path forward. If Pyongyang agrees, subsequent discussions should involve higher-level officials to insure the close attention of the North’s leadership. Those discussions should explore a broad agenda, including Pyongyang’s concerns — reaching a peace treaty and lifting sanctions — and Washington’s priorities — ending the North’s nuclear and missile programs. If all goes well and common ground is identified, the exploratory talks could be used as a platform to spin off more formal negotiations. U.S. allies and the Chinese, all of whom might eventually join the talks, would be kept closely informed.

So let’s hope that Kerry will use this trip to go beyond reciting standard, boilerplate talking points. A new diplomatic offensive, which might open an avenue to peaceful resolution of the current crisis, would demonstrate that the United States understands that exercising leadership means more than just flexing military muscle. What’s the alternative? More threats, more instability, and possibly even a war that nobody wants.