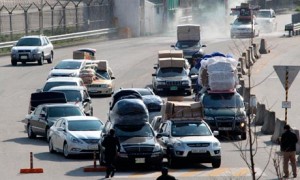 Kim Dae-jung’s Sunshine Policy was a bold experiment that sought to achieve unification by decreasing inter-Korean tensions and establishing a cooperative framework of engagement. To accomplish this, the policy promoted the restoration of road and rail links and economic assistance projects that included aid and inter-Korean business ventures in mining, agriculture, tourism and textile production. The crowning achievement of this policy was the Kaesong Industrial Complex (KIC), an industrial park in the North Korean city of Kaesong which combined North Korean labor and South Korean capital to produce consumer goods for global markets. By 2012, the KIC was composed of 123 companies that collectively employed 53,448 North Koreans and generated $470 million in sales.

Unlike every other project launched under the Sunshine Policy, the KIC weathered the ups and downs of inter-Korean relations, and until recently, it appeared to be a durable project sustained by strong political support on both sides of the DMZ. However as tensions rose this year following the DPRK’s rocket launches in April and December 2012, its third nuclear test in February 2013, the issuance of UN Security Council Resolutions 2087 and 2094 and the conduct of joint US-ROK Foal Eagle exercises, the KIC was drawn into a cycle of escalating retaliatory measures. Running out of non-military chips to play, on April 9, 2013, the DPRK ordered KIC employees not to report to work. Operations in the complex ground to a halt. After the DPRK rejected talks with the ROK on April 26, the South Korean government ordered its citizens to leave the KIC. On May 3, the last South Korean left the KIC after settling accounts for back wages and income taxes owed to the DPRK. As of this writing, it is unclear whether the KIC will ever resume operations.

In retrospect, we can see that the goals policymakers sought to achieve through the KIC were unrealistically ambitious given the constraints under which the enterprise was required to operate.

To begin with, Kaesong’s infrastructure was unable to support a large industrial park. The South Korean government had to underwrite the construction of new roads, water treatment centers, housing, hospitals, gasoline stations, a fire department, customs offices and more. The cost of this investment has reportedly totaled 900 billion won (802 million USD). Although these costs were not born by the companies in the zone themselves, they were born by the South Korean government and must be considered when assessing the success of the venture.

Second, KIC’s production possibilities were limited from the beginning. South Korea is a signatory to the Wassenaar Arrangement, an international treaty that prevents state parties from exporting technology to the KIC that could potentially be used for military purposes. Though Wassenaar did not directly affect the textile firms operating in the KIC, it did preclude the development of the high-tech manufacturing base that the North sought to acquire from the South. Under this agreement, it is highly unlikely that workers in the Kaesong zone would ever have received the required technological capital which would allow them to develop the skills to produce higher-valued outputs.

Third, managerial control of firms was restricted. Firms in the KIC operated under numerous rules that hindered the development of workplace efficiencies as well as the flow of information between North and South Koreans. Unlike typical managers, South Koreans in the KIC lacked the flexibility to select workers and their interactions with North Korean employees were fairly restricted. In fact, North and South Koreans were forbidden from even eating together or socializing after work. Firms interested in hiring North Korean workers were required to submit the number of employees they desired to the KIC Management Committee (under the North Korean government) and the workers would be assigned to them. Firms had little opportunity to recruit and select the best candidates for a position directly. Although firms in the KIC were required to offer a five percent annual wage increase irrespective of workforce productivity gains, this rule was effectively suspended from 2003 until 2007, likely as a result of the time required to raise workforce skills to a level where they could produce goods of sufficient quality to sell to foreign consumers.

Moreover, bureaucracy and security were a burden for managers. Since the DPRK could not allow workers in the KIC to engage in unauthorized communications or be exposed to unauthorized information, South Koreans were prevented from bringing print media and mobile phones into the KIC. The internet was also prohibited. Managers had to stay in touch with their offices in the South via landline. Additionally, the DPRK never streamlined entry requirements, so individuals who regularly visited the complex were required to go through a full clearance on each visit.

KIC products also had limited access to global markets. Though some goods produced in the KIC were given preferential tariffs among ASEAN countries, they were excluded from free trade agreements made with the United States and the European Union. KIC goods were thus subject to tariff levels that made their importation uneconomical and the majority of sales were limited to the South Korean market.

Finally, KIC firms faced restricted access to capital. Ex ante, firms setting up in the KIC could reasonably predict risk from unexpected/coerced contract renegotiations and/or expropriation of assets. This made capital intensive investments too risky for most financial institutions. To resolve this problem, the South Korean government supported low-interest loans to provide bridge capital during liquidity crunches and to fund capital improvements that commercial banks believed too risky. South Korea also offered political risk insurance to compensate business owners that were forced to close or whose assets were seized.

But these subsidies, while making investment in the zone possible in the first place, may have also deterred the DPRK from developing credible, responsible policies that would have nurtured the development of the KIC. How? Although firms in the KIC were struggling build profitable businesses, the DPRK never seemed satisfied with the level of revenue from wages, taxes and user fees it was receiving. Firm profits were far from exuberant, yet costs were designed to climb. In a situation where firms did not have access to South Korean subsidies, the North Korean government would have to negotiate the level of taxation it was going to levy if it wanted the firms to remain in business. Since firms in Kaesong were subsidized, however, the DPRK had no interest in developing accommodating policies for KIC firms. It could push to raise costs in the KIC and the South Korean government could intervene to keep businesses afloat. Perhaps this is the rational, budget-maximizing position, but it is not the responsible one. Had the DPRK adopted credible and responsible policies from the beginning, we would have seen the need for South Korean government subsidies decline over the years and a general increase in confidence that contract and property rights would be protected.

Though the KIC appears to have failed at both moderating crises in inter-Korean relations and promoting economic reform in the DPRK, it did bridge the information divide separating the Koreas through what I refer to as the “Choco Pie effect.” Choco Pies are South Korean snacks made up of two small round layers of cake with marshmallow filling and coated in chocolate. KIC managers would routinely give these to their North Korean employees who would take them home and sell them in local markets. Over time, working conditions in the KIC became associated with these treats. The popularity of Choco Pies reminded North Koreans in distant parts of the nation that the jobs in the KIC were among the best in the country. Wages were higher, managers more effective and workplace amenities such as heating, air conditioning, medical care and dining facilities were incomparably better than other workplaces in the DPRK. This fact radically undermined the DPRK’s official propaganda narratives that described South Koreans as repressed, poor and exploited brothers who longed to be united with their countrymen in the loving embrace of the Kim family.

So what lies ahead? In the short-run the South Korean government will be required to bail out the firms that invested in the KIC. As of this writing, losses are estimated to fall between one and three trillion won (900 million—2.7 billion USD). Seoul will also need to make a determination on the flow of electricity to the KIC, which is transmitted from a substation in South Korea. The voltage has a capacity of 100,000 kw but has been reduced to 3,000 kw to maintain a treatment facility that provides clean drinking water to the city of Kaesong.

In the medium-term, the two Koreas will need to decide if they wish to reopen the KIC. If rumors are to be believed, the DPRK reassigned all 53,000 workers to other state owned enterprises within days of the KIC’s closing. This would imply that plans to close the KIC had been in the works for some time. It would also imply that the DPRK leadership views the KIC as a domestic political cost not worth the fiscal benefit. If the DPRK closed the KIC merely as a tactic to win additional concessions from the South, however, then it may be possible for the project to resume after some protracted face-saving negotiations.

From the South Korean perspective, policymakers must decide if the political and economic benefits are worth the fiscal costs of supporting the KIC. We can now say definitively that no investment in the KIC will be immune to the ups and downs of inter-Korean political tensions in the future. This will raise the cost of subsidies required to encourage firms to invest in the KIC. Additionally, the firms most interested in investing in the KIC have been badly burned. Their experience will deter other investors from investing in the KIC until credible, substantive changes to the KIC’s governance structure are made.