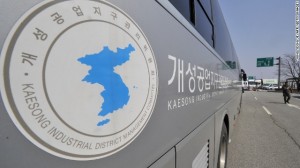 Some analysts, like Bruce Klingner writing in the Wall Street Journal on August 18, 2013[1] lament the recent agreement between the two Koreas to reopen the Kaesong Industrial Complex (KIC), calling it a “trap,” wondering why the South Koreans would want to take this step given the opportunity to close the zone altogether, and claiming that KIC is an uneconomic, political liability for Seoul. Other skeptics are concerned that important details of how the agreement will be implemented have yet to be worked out and worry that the North Koreans will “game” the South into accepting arrangements that would not serve its longer-term interests.

My view is that the KIC agreement represents the first step of a careful effort by both countries to re-calibrate their relationship after 10 years of excessive largess from Seoul during the Sunshine Policy era and five years of excessive confrontation during the Lee Myung-bak administration. Both countries have contributed to ups and downs in the inter-Korean relationship and so it is wise for the new leaders to tread carefully in reframing their future relations. In this context, the KIC agreement represents an opportunity to build a more stable foundation for inter-Korean relations that could underpin the ability to address deeper and longer-term issues critical for the security and prosperity of both Koreas. It also provides an opportunity to make improvements in the policies governing the investments and operations in Kaesong that would make it more attractive for investors, more diversified in business models, and more linked to the domestic North Korean economy, thereby increasing its economic value and impact on that economic system.

Several features of the five-point agreement on reopening the KIC provide new openings to pursue these opportunities.

First is the creation of an Inter-Korean Joint Committee on the Kaesong Industrial Complex. This committee is mandated to “discuss compensation for damages inflicted on companies during the suspension of the complex and other related issues;” to discuss issues related to the commitment to guarantee safe passage of South Koreans to and from the complex, protection of businesses investment properties, communications including mobile phones and access to the internet, and clearance procedures; and to discuss improvements in the rules governing investment and operations in the complex to make it more attractive to investors and internationally competitive. The five-point agreement includes a commitment to sign an agreement on the formation and operation of the committee at an early date and indicates that sub-committees may be established.

While the details of how the Joint Committee will function remain to be worked out, its mandate is significant in scope and ambition. New ground is being broken in the commitment to pursue collaborative efforts to improve KIC governance and build new foundations for future expansion. The negotiation of concrete terms of reference and working modalities for the committee provides an important opportunity for the two Koreas to translate into practice the principles and broad statements of intent that are reflected in the agreement. Certainly the proof will be in the pudding; the conduct and accomplishments of the Joint Committee will be a very visible indicator of how inter-Korean relations can overcome political pressures in both countries to address issues in a pragmatic, pro-business way. If the committee can establish a culture of reasonableness based on common interests and resolve disputes within a legal framework, this can serve as a good model for cooperation in other areas of the relationship as well as provide a reassuring environment for future investors.

The other feature of the five-point agreement that provides important new openings for substantive changes in the business environment of the KIC and the possibility of expanded economic benefits for both countries is the third item in the list:

The two Koreas will guarantee conditions for international–level corporate activity for companies operating in the Kaesong Industrial Complex, and develop the complex into one with international competitiveness.

From a political perspective, the inclusion of foreign investors in the KIC is expected to reduce the risk of closure in the future during periods of strained inter-Korean relations, particularly with a joint guarantee from both governments to protect business interests. Inoculation of the complex from the ups and downs of inter-Korean relations would go a long way in promoting stability and encouraging potential investors. Also, having a common interest in the success of foreign investors in the complex gives both Koreas a reason not to upset the apple cart. These kinds of incentives should strengthen the fabric of mutual interest and interdependence in economic relations between the two Koreas, which is an important ingredient for any meaningful process leading eventually towards unification.

From a business perspective, equally if not more important is the prospect of more flexible and attractive provisions for labor, wages, taxes, and insurance as well as preferential tariffs for exports. Since the KIC was established in 2004, North Korea has adopted new laws governing the Special Enterprise Zones (SEZs) of Rason in the northeast and Hwanggumpyong and Wihwa Island in the northwest that contain provisions much more in line with international practice. These zones are also explicitly open for South Korean investment under the same provisions that apply to other foreign investors. On May 26, 2013, the Presidium of the Supreme People’s Assembly promulgated a new law on economic development zones that contains 64 articles covering the establishment, development and management of economic development zones, transactions in those zones, incentives for investors, and settlement of disputes.[3] While this law explicitly excludes the KIC, the fact that the North Korean government is willing to work with South Korea to apply the more liberal and business friendly terms of this law to the KIC and commit to the higher bar of international competitiveness is a very positive step. To what extent this will apply to existing businesses or be limited to new investors remains to be seen.

Three other potential innovations at the Kaesong Industrial Complex, while not mentioned in the five-point agreement, could have significant impacts on the North Korean economy. First is the diversification of business models. Currently all firms in the KIC fit the model of South Korean companies hiring North Korean workers and providing technology and other inputs for production as well as management of the operations. All outputs are sent to South Korea for sale there and in some instances for export to third countries. Joint ventures could be a new possibility that would provide more opportunities for transfer of technology, skills, and managerial experience at international standards to North Korean partners. Another option would be to permit North Korean firms to invest in the zone with external financing and subcontracting for capabilities needed for profitable operations.

The second potential innovation is to allow firms to export to the North Korean market, not just South Korea or abroad. This would be especially useful for leveraging international competitiveness standards on domestic producers in North Korea and for building distribution networks that integrate production in the KIC with the domestic economy.

Third is to promote backward linkages to the domestic North Korean economy for supply of inputs and services to firms in the KIC. This would enable expanded business opportunities for domestic firms, leverage job creation, broaden exposure to international competitive standards, and facilitate technology transfer.

The five-point agreement may not be a milestone in the long course of inter-Korean agreements, and it might falter in the negotiation of a more detailed operational agreement on shared responsibilities for future management and expansion of the Kaesong Industrial Complex. But it does carry the seeds of opportunity for constructing a new type of working relationship between the two Koreas on economic affairs that could have significant implications both for stability on the peninsula and economic opening for North Korea.

In the larger context of concerns about North Korea’s nuclear program, an underlying question is whether improvements in inter-Korean economic relations and a more dynamic KIC operating under protections from other aspects of the political environment will help or hinder the prospects for denuclearization and management of other potential conflicts with North Korea. Concerns about limiting South Korea’s options to respond to future provocations or of being perceived as tacitly accepting North Korea as a nuclear weapons state may underpin the assessment that the KIC agreement has downside implications for both South Korean and U.S. security interests. Hand-wringing aside, fresh approaches are needed to deal with the challenges posed by North Korea. Ultimately, the first call on this lies with South Korea and President Park Geun–hye is moving forward with her trust-politik policy, starting with the five-point agreement. The rationale is that increased trust and a deepening and widenening of committed interdependencies with North Korea will create a more favorable environment for resolving nuclear and other longer-term issues by increasing North Korea’s stake in mutual benefits and incentives to protect these. Only time will tell.