All is seldom as it first appears in the world of North Korean sanctions busting. Six weeks after the inspection of the North Korean vessel Chong Chon Gang by Panamanian authorities on suspicion of drug trafficking, the full extent of the ship’s illicit military cargo falsely declared to be sugar and spare plastic sacks appears to have been much larger than previously reported. Moreover, key parts of the shipment seem intended for Pyongyang’s own use in its conventional military defenses, not to be repaired and returned to Cuba. Finally, the results of the search by Panamanian authorities provides new insight into North Korea’s illicit procurement priorities as well as evidence of its preferred maritime concealment methods and raises a host of still unanswered questions.

While initial media reporting suggested the seizure amounted to a few shipping containers with anti-aircraft missile components, two jet fighters and related engines, in fact a total of 25 shipping containers have now been recovered, together with six military vehicles. These were camouflaged at the bottom of five of the ship’s holds beneath about 200,000 bags of sugar, weighing approximately one hundred pounds each. This amount of sugar together with “two thousand empty polyethylene bags” were the only declared items listed in the cargo manifest signed by North Korean Captain Ri Yong Il.

Figure 1. Scanned Cargo Manifest of the Chong Chon Gang.
(For all images, click to enlarge.) 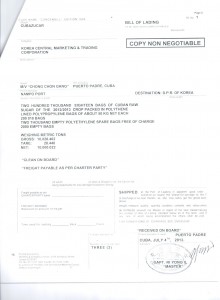 A report compiled by various Panamanian authorities and the United Nations Organization on Drugs and Crime (UNODC) Container Control Programme (CCP) together with photographs of the seizure make clear that contrary to both the North Korean shipping declaration and Cuban government statements the shipment was without a doubt a violation of United Nations sanctions on North Korea.

Following the seizure, Cuban authorities released a statement claiming that the ship was transporting “two anti-aircraft missile complexes…nine missiles in parts and spares, two Mig-21 jet aircraft and 15 motors for this type of airplane…to be repaired and returned to Cuba.”[1]

The statement was misleading to say the least; the ship was also transporting a variety of small arms and light weapons (SALW) ammunition and conventional artillery ammunition for anti-tank guns and howitzer artillery as well as generators, batteries and night vision equipment, among other items.

The various rocket-propelled grenades (RPGs) and conventional artillery ammunition, many in mint condition, were unused and much of it was in original packing cases. They clearly were not “to be repaired and returned to Cuba.” Rather, these items were intended simply for delivery to North Korea for its own use.

The most obvious discrepancy between the Cuban government statement and North Korea’s illicit procurement practices has to do with the MiG-21 jet aircraft engines found on the ship. Here North Korea has a track record of attempted illicit or clandestine procurement of these engines as well as of the MiG-21 aircraft in general, having attempted to procure jet spare parts and engines on at least three separate occasions. The Associated Press reported recently that in 2011, North Korea attempted to buy 20 MiG-21 aircraft from Mongolia for “engines and scrap.”[2] In a 2012 report, the United Nations Panel of Experts which monitors international sanctions noted that a Member State had stopped the sale of 32 retired fighter aircraft three years earlier because of suspicions that they would be transferred to North Korea. In 1999, Kazakhstan reportedly sold 40 MiG-21 aircraft to North Korea. In short, this documented history, suggests that the MiGs and the 15 jet engines were another item on the Chong Chon Gang that were not “to be repaired and returned to Cuba,” as claimed by Havana.

The historical record is supported by documentary evidence—photos which highlight the way the aircraft fuselages and engines were packed.

They show that the MIG fuselages were rather carelessly packed with no protective padding covering the more sensitive extremities of the fuselage that could have been damaged should the ship have encountered rough seas on its voyage across the Pacific. In contrast, the engines were stored in shipping containers separate from the aircraft fuselages. More securely attached and adequately spaced, they were also covered in layers of protective plastic sheeting and brown packing paper.

According to a former Finnish Air Force technician familiar with his country’s old fleet of MiG-21s, the engines aboard the Chong Chon Gang appear to have been raised half a metre above the container floor in a manner that would be consistent with a dedicated or improvised transport frame to protect the underside of the engine while in transit. The more careful packing of the engines suggests their end use as replacement engines while the sloppy packing of the fuselages indicates their intended use as spare parts. In any event, the method of packing does not suggest that the aircraft themselves were to be “repaired” and “returned” to Cuba, but rather for end use in North Korea.

What is certain is that North Korea attaches great importance to its fleet of MiG-21 jet aircraft. While obsolete by western standards the MiG-21 remains a fast aircraft even by 21st century standards. With a maximum speed of Mach 2, it is as fast as the KF-16, the South Korean variant of the American F-16 that forms the mainstay of Seoul’s fighter fleet. While more modern air-to-air missile and command and control technology would give allied air forces the edge in any future war on the peninsula, the MiG’s speed and maneuverability could increase its survivability, particularly in a surprise or ground attack role. More importantly, when it comes to illicit procurement, the North Korean leadership attaches great importance to its air force’s readiness and the concomitant need for spare parts despite the United Nations arms embargo.

Reinforcing this conclusion, North Korean Air Force Chief Yi Pyong Chol is frequently sighted boarding Air Koryo aircraft for visits to foreign countries, such as Russia, that are the principal manufacturers or suppliers of spare parts for military aircraft found in Pyongyang’s inventory. In 2011 he was photographed in Russia together with Kim Jong Il and then Russian President Dimitri Medvedev on a visit that South Korean media reported likely involved an attempt to acquire aircraft. Interestingly, Yi was also a member of the North Korean delegation filmed in Havana in a July 2013 meeting with Raúl Castro. The precise date of the loading of the MiGs onto the Chong Chon Gang is unknown. But it may have occurred while the North Korean delegation was in Cuba, leaving open the tantalizing possibility that members witnessed the loading of the Chong Chon Gang. What is certain is the importance that Kim Jong Un attaches to his Air Force, driven home by his relatively frequent televised visits to Air Force and Air Defense bases always in the company of Yi Pyong Chol.

The Chong Chon Gang episode combines two of North Korea’s maritime smuggling modus operandi: the use of shipping containers and bulk carrier vessels owned by North Korean companies. The United Nations Panel of Experts has documented the use of shipping containers for North Korea-related consignments of embargoed dual use or military goods that may be used for missile production or weapons of mass destruction (WMD) programs. In recent years such seizures have generally centered around cargoes destined for Syria, most likely related to the research facility in the Deir ez-Zor region that was bombed by Israel in 2007. These consignments, falsely declared and transported anonymously for much of their journey aboard container vessels owned by some of the world’s biggest shipping lines, blend into the huge volumes of container traffic that depart East Asia for Middle Eastern, European and African markets on a daily basis.

Trying to identify consignments of trafficked goods from the vast majority of licit shipments is extremely difficult. The United Nations Office on Drugs and Crime Container Control Program is the only dedicated international initiative working at a practical level to tackle this problem. This widely recognized UN flagship project established one of its first pilot programs in Panama, including the port of Manzanillo, which, as luck would have it, was the very port the Chong Chon Gang was brought to for a detailed search. A forensic analysis and database search of the containers found aboard the Chong Chon Gang shows that they had not been registered as in use for cargo movements involving legitimate shipping companies for many years. It is believed that the containers were taken out of storage for the express purpose of transporting the sanctioned military goods to North Korea.

In contrast to the normal modus operandi for shipping containers, the embargo-busting voyage did not involve a dedicated container ship but rather a bulk carrier. A bulk carrier is a ship designed to transport dry cargo—such as sugar, cement or coal—in large quantities. In the case of the Chong Chon Gang, the ship’s holds, designed for transporting commodities such as sugar or grains, had been deliberately modified so that shipping containers could be moved into position underneath the legitimate sugar cargo to facilitate a clandestine transfer.

Figure 9. Hatch leading down to the first hold.

Figure 10. Interior section of the ship.

One question that may confront the United Nations Panel of Experts currently investigating the case is whether this concealment device was created specifically for this voyage or is simply evidence of a long-standing practice employed by North Korean-owned vessels transporting illicit materials in a clandestine fashion.

Pyongyang certainly has a track record of employing bulk carriers for clandestine missile movements in the past and documented cases, such as the So San shipment, are likely an indication of much wider, undetected transfers. That vessel was interdicted by the Spanish navy in 2002 and found to be transporting 15 Scud missiles hidden under large quantities of cement apparently destined for Yemen. Although deeply unstable, Yemen was not the subject of a United Nations arms embargo and neither was North Korea at the time. So while the US allowed the ship to continue to Yemen, the incident is said to have helped spur the creation of the Proliferation Security Initiative (PSI), a counter-trafficking mechanism with a focus on sea and airborne interdictions and information-sharing. Media reports have quoted anonymous US government sources as having suggested that the Chong Chon Gang tip-off came from Washington. But it is unclear whether this information-sharing occurred within the context of PSI or as part of ongoing counter-narcotics cooperation between Panama and the US.

The United Nations Panel of Experts on North Korea has been tasked with investigating the Chong Chon Gang shipment and reporting its findings to the Security Council. The reports of the Panel of Experts, which make for interesting reading, are now the reference texts for UN diplomats, researchers and academics when it comes to following the flows of illicit goods more generally. Given enough time and at least minimal cooperation from Member States, the Panel’s investigation of the Chong Chon Gang shipment, if made available to the public in the next year could provide the definitive account.

There remain many unanswered questions surrounding the Chong Chon Gang seizure; for example, the actual extent of North Korea’s military trade in conventional weapons, missile technologies and dual use goods banned under UN Security Council resolutions. It also remains unclear how much historic diplomatic relations as well as military and technical cooperation is reflected in DPRK clandestine trading patterns.

An eye for detail is key and the Chong Chon Gang seizure provides clues. Attached to one of the Cuban surface-to-air missile systems is a plaque. The outline of a map of Angola provides the backdrop for Soviet-era MiGs and tanks as well as a “V” (for victory) sign together with the initials “RPA Cuba” that stands for República Popular de Angola, the name of the country until 1991.

Figure 11. “RPA Cuba” plaque seen on one of the surface-to-air missile systems.

While memories of fraternal socialist victories have faded following the collapse of the Soviet Union, echoes of the past are still to be found hidden under North Korea’s illicit cargoes to this day.