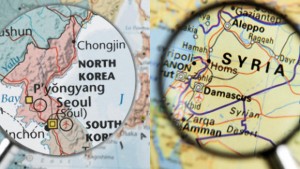 North Korea is as befuddled in discerning US policy toward Syria as are the US Congress and American people. When attempting to decipher President Barack Obama’s plans toward Syrian leader Bashar al-Assad, North Korea would be confronted with a dizzying array of contradictory US statements, crossed redlines, and reticence to fulfill declarations of intent. Pyongyang also sees an American public weary of war, an intensely divided US Congress, policymaker and pundit hawks and doves switching roles, and US allies even more reluctant than usual to participate in military action.

To the degree that North Korea can penetrate this confusing political morass, the regime is probably heartened by signs of a declining American willingness to intervene overseas even when confronted by evidence of the use of weapons of mass destruction (WMD). Pyongyang will conclude that President Obama’s bold rhetoric, including that directed against North Korea, was unlikely to be backed with significant military action. The regime will incorporate this perceived American passivity into its decision-making in future confrontations with Washington and Seoul.

Despite this conclusion, North Korea will certainly publicly characterize US military action against Syria, however limited, as yet another example of a bloodthirsty rogue nation unconstrained by the international community. Pyongyang will justify the retention of a nuclear arsenal as necessary to deter a similar US attack, as it similarly claimed after the 2011 attack on Libya.

Obama—A Reluctant Warrior. Even if President Obama initiates a military strike against Syria, North Korean leaders will assess that it was done reluctantly and only by the US president feeling boxed in by his own words. When confronted with President Assad’s use of chemical weapons, which fulfilled Obama’s redline requirement for US military action, the administration first downplayed the evidence until it became irrefutable.

Obama’s delaying tactics and clear discomfort in having to pursue military action, suggests he may have uttered the last redline of his presidency. President Obama’s stunning attempt to distance himself and avoid responsibility from his own declared redline will only affirm North Korean perception of his unwillingness to act in the future. On September 4, 2013, Obama claimed, “I didn’t set a redline, the world set a redline.”[1]

Obama seems less like the iconic Marshall Will Kane in the classic American movie High Noon, willing to go it alone when confronting evil, and more like the guy in a bar secretly hoping his friends will stop the fight before he has to get involved.

During his G-20 press conference, President Obama plaintively explained, “I was elected to end wars, not start them. I’ve spent the last four and a half years trying to reduce our reliance on military power as means of meeting our international obligations.”

A Perplexing Political Landscape in Washington. Regardless of one’s own views of the need to intervene in Syria or of President George W. Bush’s actions in Iraq and Afghanistan, these events have clearly influenced the current US political debate. Congressional deliberations have also been fueled by the changing and contradictory statements by President Obama and administration officials on the objectives of military action against Syria and vacillation on whether the president has inherent authority to attack without Congressional approval.

Ironies abound with many of the lawmakers and institutions that opposed Bush’s overseas interventions now supporting President Obama and vice versa. For example, the Congressional Black Caucus (CBC), a fervent opponent of Bush’s actions, was instructed by its chairwoman to “limit public comment” on Syria. A CBC aide privately commented that the request was to “quiet dissent while shoring up support for President Obama’s Syria strategy.”[2] Liberal, traditionally anti-war Democrats and some hawkish Republicans now find themselves agreeing in their opposition to military intervention in Syria.

Minimalist Military Strikes. If President Obama carries out a military strike against Syria, it is likely to consist of a small number of cruise missiles against a limited number of military targets. The minimalist nature of the attack and its lengthy delay despite US assertion of irrefutable evidence of Syrian chemical attacks against civilians—including children—could be interpreted by Pyongyang as indicative of future US reluctance to respond to a North Korean attack.

The United States did not respond to two North Korean attacks against South Korea in 2010, including the shelling of a civilian island that killed 50 South Koreans. The Obama administration sought to dissuade Seoul from naval training exercises in December 2010 that were meant to deter follow-on attacks for fear it would lead to an escalatory North Korean response. South Korean military officers have told me that Washington also limited the scope of its own participation in joint naval exercises in the West Sea due to Chinese criticism.

North Korea might interpret that restraint as consistent with US unwillingness to respond to previous deadly attacks against US targets in 1968, 1969 and 1976. Nor did Seoul retaliate after several assassination attempts against its presidents, the downing of a civilian airliner, or the attacks on the Cheonan and Yeonpyeong Island in 2010.

Emboldening Future North Korean Actions. North Korea has never been reticent to initiate provocations or military attacks against South Korean or US targets. The new leader Kim Jong Un has demonstrated that he is just as belligerent and dangerous as his predecessors. Kim was willing to raise tensions to perilous levels earlier this year with threats of nuclear destruction against Washington and Seoul.

When North Korea next decides to abandon its current charm offensive to return to a typically more confrontational policy, it may feel emboldened by the US debate on Syria to push the envelope still further.

Beyond President Obama’s discomfort in having to consider military action, North Korea will certainly notice the devastating effects of massive budget cuts on US military capabilities. The regime will likely discern the dramatic mismatch between the Obama administration’s claims of a “pivot to Asia” with the fact that there was no planned increase in US force levels in the Pacific. No US forces withdrawn from Iraq, Afghanistan or Europe were to be redeployed into the Pacific Theater.

Sequestration-mandated defense cuts of $500-600 billion, coming atop previous $480 billion in defense cuts imposed by Obama, will hinder US ability to respond to a crisis on the Korean peninsula. Already, one in three US Air Force combat planes have been grounded due to lack of funding and ships remain in port rather than on planned training exercises. The Marine Corps also has insufficient transport capability to fulfill its missions.

Pyongyang might even perceive a pivot away from Asia. In 2012, the Obama administration agreed to revise the Guam Agreement, the planned realignment of US Marines in the Pacific, by accepting an earlier drawdown of US forces from Okinawa than originally planned. Moreover, some Marines will be now be redeployed further east—away from potential conflict zones, including Korea—than originally envisioned, with some units going to Hawaii and California.

New US Secretary of State John Kerry even questioned the utility of the Asia Pivot. During his confirmation hearing, he commented, “I’m not convinced that the increased military ramp-up is critical yet. I’m not convinced of that.”[3]

Setting aside the debate as to whether North Korea ever intended to abandon its decade’s long quest for nuclear weapons as a negotiating chip, a dubious claim in this author’s view, Pyongyang uses US military attacks as public justification for maintaining its nuclear arsenal. The regime also hypes US military actions for domestic political purposes, blaming the country’s abysmal economic conditions and excessive military spending on the need to defend against a US threat.

In March 2011, the North Korean Ministry of Foreign Affairs declared:

[The] Libyan crisis teaches the international world a serious lesson. It was fully exposed before the world that Libya’s nuclear dismantlement much touted by the United States in the past turned out to be a mode of aggression whereby the latter coaxed the former with such sweet words as ‘guarantee of security’ and ‘improvement of relations’ to disarm itself and then swallowed it by force. It proved [that] peace can be preserved only when one builds up one’s own strength.[4]

Pyongyang has made clear that it has no intention of complying with UN resolutions demanding its denuclearization nor fulfilling its Six Party Talks pledges to abandon its nuclear weapons.  North Korea has declared:

President Obama and the US Congress will debate and eventually resolve whether the US should initiate military action against Syria for its use of chemical weapons against its citizens. The effects of the decision will reverberate long after the dust from the initial attack has settled. And the repercussions will have significant impact far beyond Syria’s borders to throughout the Middle East…and perhaps even North Korea.