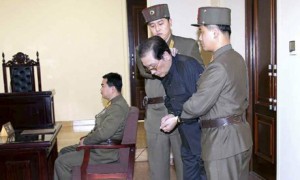 Jang Song Thaek was executed in a blitzkrieg manner in less than four days after he was arrested at the Enlarged Politburo Meeting of the Cental Committee (CC) of the Workers’ Party of Korea (WPK). The immediate response of this author to the news of his execution was, “Oh my God, it is too much.” How could Kim Jong Un execute Jang, who is none other than Kim Il Sung’s son-in-law, Kim Jong Il’s brother-in-law, Kim Kyong Hui’s husband, and his own uncle-in-law? I even had a fleeting thought that his execution may not be true; Jang might be confined somewhere out of sight for some time.

But after I read the text of the report of Korean Central News Agency (KCNA) on the ruling of Jang’s crimes at the special military tribunal of the State Security Department (SSD), my response was two-fold: 1) Jang’s crime might have been much more serious and substantial than we thought and Kim Jong Un’s fury must have been much more fierce than we expected; and 2) the ruling was not something unfamiliar when the history of power struggles and consolidation in North Korea is taken into account. This kind of purge and deadly court ruling occurred repeatedly in the past during the Kim Il Sung and Kim Jong Il eras.

What is new this time, though, is that Kim Jong Un executed his uncle-in-law in such a brutal way, which reveals a certain amount of hubris and the temperament of the young leader, different from that of a seasoned, aged leader. It is clear by now that Kim Jong Un’s newly-established image appears to have struck fear deep in the minds of North Koreans, invoking “forced compliance” of the people and power elite alike.

What did Kim Jong Un seek to accomplish through this dramatic but brutal showing, which took place in such a speedy way? Is there any new evidence that Kim, despite the violent disturbances associated with Jang’s removal and execution, will continue his current policies of expanding economic reform and opening and resuming Six Party Talks, much less the previously reported North Korea’s development agency’s signing of a contract with the Chinese city of Tumen on Onsong Economic Development Zone? And how should we understand, characterize and respond to what happened in North Korea for the interests of all the parties involved?

First, by mounting this brutal show in such a blitzkrieg fashion, Kim Jong Un appears to have sought a swift wrap-up of this tragedy before the start of the commemoration period of the second anniversary of his father’s death. Prolonging a strained mood or atmosphere like this would not bring about any positive gains for Kim.

Of course, the chilling effect of this bloody show—apparently planned by Jo Youn Joon (First Vice Director, Organization & Guidance Department of the CC of the WPK), carried out by Kim Won Hong (Director, State Security Department), guarded by Choe Ryong Hae (Director, General Political Department of the Korean People’s Army), and of course directed by Kim Jong Un—was something Kim determined a useful instrument with which to obtain the “voluntary compliance” of the power elite and people.

Second, is there any new evidence that Kim Jong Un will continue his current policy of expanding economic reform and opening and resuming the Six-Party Talks? Yes, there is. One thing to remember here is that Jang and his associates have been under investigation at least since mid-November, and that Kim Jong Un continued to take measures for reform and opening throughout this period.

On the day of Jang’s execution, December 12, North Korea offered to hold the fourth round of North-South Joint Committee Meetings for the Kaesong Industrial Zone in a week, that is, on December 19. What is noteworthy is that North Korea has never initiated from its side any round of North-South Joint Committee Meetings until now. North Korea also agreed to allow a visit to Kaesong, on December 19, of a delegation of some 30 people who are participants of the G-20 Seoul Conference—including 6 vice ministers of Australia, Russia, and other G-20 countries; representatives of the International Monetary Fund, Bank for International Settlements, Asian Development Bank and others—to be hosted by South Korea’s Ministry of Strategy and Finance. The delegation will be reportedly accompanied by support staff and press corps, both South Korean and international.

Also on December 12, North Korea’s ambassador to the UN Secretariat and International Organizations in Geneva held a news conference and stated that North Korea is ready to hold dialogues of whatever kind for the resolution of problems related to tension reduction and security concerns in Korea. He repeated North Korea’s long-held demand toward the US to stop the Key Resolve for 2014—the US-South Korea joint military exercise—and emphasized that Pyongyang will not give up its nuclear deterrent unless the US terminates its anti-North Korea policy.

Finally, how should we understand and respond to what happened in North Korea for the purpose of starting a strategic conversation with North Korea in the interests of all involved? Outside watchers of Jang’s removal from power almost invariably (and naturally) feel discomfort because of Kim’s extremely brutal power politics. But what is truly needed on our part is to clearly define and characterize Jang’s case as exclusively belonging to the “domestic political affairs” of North Korea. We should not make the mistake of missing opportunities to initiate dialogue and negotiation with North Korea for the resolution of key pending issues by linking North Korea’s domestic political affairs (which we have no control over) to its international relations. What is not difficult to predict is that Kim Jong Un, now that he can stand on his own feet and desires to open his own “glorious” era in the 21st century, will be more willing to cooperate with the United States, South Korea and international community for the resolution of key problems—economic, war and peace, and nuclear—that he has inherited from his predecessors. But if he feels he is being antagonized for whatever purpose, he is almost certain to counter that threat in a loud and aggressive way, head to head, so as not to lose face as the “supreme leader” of North Korea.