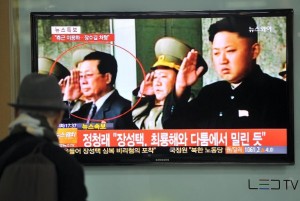 Jang Song Thaek has been purged, in a way that suggests that Kim Jong Un wanted to make a point. This unusual procedure is without a doubt a sign of major problems. Otherwise, the overambitious uncle would have been removed silently, as has happened so many times before. But putting all this in great detail on the front page of Monday’s Rodong Sinmun and in prime time news is clearly meant to be a statement, and a warning. I would add that the purge is the public admission of the existence of opposing views right at the center of power. Such openness is highly risky. Most North Koreans had never even thought about heresy; now Kim Jong Un himself has pointed out this option.

Why did he take such a risk? We have already seen a number of well-founded explanations: Kim Jong Un’s temperament and his wish for emancipation from his mentor; Uncle Jang’s disrespect; rivalry between regents; policy disagreements, and even a personal vendetta by Aunt Kim Kyong Hui. I would like to add another aspect, in particular since the aforesaid hypotheses explain the purge, but not why it was done in public.

In the end, this might be just another case of “it’s the economy, stupid.” Ever since Kim Jong Un took power in December 2011, the improvement of the people’s living (inmin saenghwal hyangsang) has been his top economic priority. In addition to a number of renovated or newly built entertainment facilities including a dolphinarium in Pyongyang, the country is witnessing a construction boom of dimensions not seen in the 22 years I have been following events in North Korea. Existing houses are being upgraded by adding a few floors, and new ones are being built. Best known are the Mansudae apartments in central Pyongyang, but this is just the tip of the iceberg. The whole country is witnessing major construction efforts, and we are not just talking about one or two hotels.

In addition, the number of cars has been growing so much that in the capital traffic lights had to be installed and the famous “Flowers of Pyongyang”—the traffic ladies—had to be pulled off the street lest they get overrun by Beijing taxis, home-made Huitparams and Samchollis, the ever-present German luxury brands of all ages and the occasional Hummer. Inline-skating kids are now such a common sight that hardly any visitor bothers mentioning them anymore. Restaurants and shops are everywhere, people are better dressed, more self-confident than two decades ago, and obviously also better fed, at least in the capital. Air conditioners are mounted on the walls of many residential buildings and offices. Everyone seems to have a mobile phone, and there are even tablet computers. In the countryside, too, signs of improving living standards are visible, including solar panels, TV antennas, cars in front of farmer’s houses, shops, restaurants and so forth. In 2012, an extra school year has been introduced for all the country’s children.

This is all good. I have always been very optimistic and positive about these developments. However, the one key question I am constantly asked when I emphasize these improvements is where does the money come from? Where does the state get the funds for this sudden construction boom? Where does the fuel for the cars come from when the country has no oil reserves? What about the electricity for the air conditioners, if we think about those famous nighttime satellite images showing a dark northern half of the peninsula? Who pays for that extra year of school in a country with no tuition fees? And where do a couple of million new middle class individuals get the money for their massive hike in consumption? This is when I usually start mumbling something about a state owned economy where costs and prices do not really matter, about China, exports of raw materials and joint ventures. But to be honest, the economist inside of me is not completely convinced.

As an East German, I find it hard to avoid comparing North Korea today to my long gone home country a quarter of a century ago. For instance, North Korea’s Arirang mass gymnastics exhibitions—seen the same thing right in my hometown of Leipzig. CNC machine tools, East Germany’s “wunderwaffe,” to win an already lost economic war? Seen that too. Construction boom? Guess what, same thing in East Germany. When Erich Honecker, whose fate we all know, came to power in 1971, his political credo was “the unity of economic and social policy.” Translated, he meant to improve the people’s living. Sound familiar? Exactly. This is what Kim Jong Un is doing too. And with the benefit of hindsight, we know what happened in East Germany. The state borrowed money to finance its ambitious housing program, it even sold art and antiquities to make enough hard currency to be able to import coffee because East Germans were not happy with poor quality “Ersatz” anymore. Young couples received interest-free loans and preferential access to apartments. There were dozens of other goodies including subsidized staple food and mass transportation.

In the end, East Germany was not only economically bankrupt, it was politically bankrupt too; people got used to all these goods and comforts and wanted what everyone in the world wants: more. Providing more, however, is like trying to reach the horizon. No matter how fast you run, you will never get there. Over the mountains are mountains, as the saying goes. Despite a rising living standard, East Germans were not grateful, but unhappy. And since the state claimed to be the master of everything, it was also held responsible for this unhappiness, much to the bewilderment of the geriatric Party elite who just did not get it. Next thing to happen was a German unification that looked pretty much like surrender and capitulation—for good reasons.

North Korea is, of course, not East Germany, and 1989 is not 2013. Beijing is a difficult, but economically enormous potent partner that East Germany never had. North Korea sits on billions of dollars in raw materials that Honecker could have only dreamt about. Just last week we learned that North Korean deposits of rare earths are twice as high as the hitherto known global reserves. Some things are similar, such as the reoccurring politically motivated willingness of the other half of a divided country to seek limited cooperation.

The question is whether this is all enough to pay the bills. Entertainment and construction are as unproductive as defense spending, in particular since prices are kept way below costs for political reasons. Exploding consumption in an underdeveloped country is dangerous, as it takes away scarce resources from productive investment. It is no coincidence that economic dictators like Park Chung-hee forced their people into frugality. Dependency on the export of raw materials is as risky as a monoculture or dependency on a single major economic partner. And while I do not buy the idea that China has significantly changed its stance towards North Korea, I do see signs of a more, let’s say, professional and pragmatic relationship. China only helps North Korea if it believes it will benefit. As soon as this assessment changes, China will adjust its policy and North Korea will be left in deep economic trouble.

We do not really know enough to be certain, but it may be that either Kim Jong Un’s political power or the economy is under threat. My guess would be the latter, although both are closely interrelated. The sudden increase in unproductive state spending without being preceded or at least accompanied by major changes in economic policy, a.k.a. reforms, suggests that the North Korean state is living on its reserves. Once they are depleted, trouble is inevitable. Recent reports that North Korea is selling gold are by no means new; this has happened before, as this is not the first time that the country is in economic difficulties. But it nevertheless fits alarmingly well into this picture.

If history is a teacher, overspending on social policies without securing adequate and stable sources of income, and creating expectations without being able to satisfy them will, in the end, lead to economic and political bankruptcy. The consequences for security in the region would be disastrous, since North Korea, unlike East Germany, has nuclear weapons and an army that is willing to use them.

If this analysis is correct, then the future holds two possibilities. First, we may be witnessing the beginning of the long-predicted endgame for North Korea. In that case, I am glad I live far away in Europe. Or, second, on a more optimistic note, the Jang purge shows that Kim Jong Un himself is aware that his economic policies have reached a critical point. The numerous hints at Jang squandering the country’s resources and obstructing the economic policy of the Cabinet indicate that the uncle is supposed to be a scapegoat for an expected economic downturn or the excuse for a drastic change in economic policy. This change could take the form of a scaling back of the past two year’s costly largesse and a return to the muddle-through strategy that North Korea has pursued for such a long time. Better yet, Kim Jong Un may have decided to finally liberate the economic potential of his country by introducing bold reforms.