This oped was originally published on CNN Opinion on January 7, 2014. Andray Abrahamian is a contributor to 38 North and executive director of Choson Exchange, a nonprofit that provides educational training in business and economics for young North Koreans. 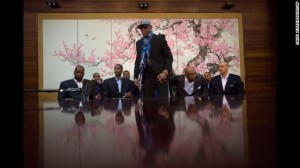 (CNN) — This week, we’ve been treated to the increasingly familiar sight of former NBA star and provocateur Dennis Rodman attending events in Pyongyang, North Korea. It’s his fourth trip in less than 12 months.

On Tuesday, an angry Rodman defended his visit in a CNN interview straight from Pyongyang, at one point saying to “New Day” anchor Chris Cuomo, “I don’t give a rat’s ass what the hell you think …” in response to question about Kenneth Bae, an American detained in North Korea.

When will we tire of this circus?

In case you don’t watch cable news, you might miss that the media really loves this kind of thing. No story about North Korea is too weird to go unreported, even if there is no real information to disseminate. Recall the recent rumor that Kim Jong Un’s uncle was executed by being fed to hungry dogs, which most likely was started as satire on Chinese social media but was at first reported widely in the media (CNN was unable to confirm and did not report the story).

In media discourse, North Korea is the classic enemy. The regime’s injustices, quirks and dysfunctions are reassuring to Americans that their own country is just the opposite: Normal, well-functioning, a land of peace and liberty.

But add in Rodman to the North Korea story, and it’s bound to produce eye-popping headlines: The Weird American Athlete Goes to Weird Country story is just too easy not to cover.

Rodman himself seems to be thriving on finding a strange smidgen of relevance through his visits to North Korea (and perhaps a Paddy Power paycheck). Though often described as quite shy, he has always enjoyed challenging the values of Middle America. North Korea is providing him a new avenue to be in the spotlight.

The most passive player in this tragicomedy is Rodman’s home country, the United States. The U.S. State Department has deployed the rhetorical equivalent of an embarrassed teenager whose dad has shown up to dance at his prom. Something along the lines of “this has nothing to do with us” is what the State Department has said with every one of Rodman’s trip. Last winter,the State Department criticized Rodman’s timing as it followed a nuclear test and rocket launch. This time, it has merely said a private individual can do what he wishes.

This is an understandably cautious position. After all, Rodman has professed his love and undying affection for Kim, and he is probably not a canny enough operator to spearhead any form of political outreach along the lines of the “Ping-Pong diplomacy.”

On this trip, Rodman addressed the unavoidably political nature of a relationship with North Korea, saying his visits could “open the doors” to “talk about certain things.” In the CNN interview, he argued that it’s a “great idea for the world.”

Rodman’s celebrity status and sporting prowess has given him access to Kim. At some point, when both the U.S. and North Korean governments are feeling a little brave, perhaps they can try to thaw the ice with more professional diplomats tagging along on cultural or sporting exchanges.

There are precedents. For example, the U.S.-China Ping-Pong diplomacy of the 1970s had its genesis in table tennis player by the name of Glen Cowan. Once he broke the ice, the governments began talking.

The kind of engagement that Rodman is pushing cannot always be seen as merely rewards for a naughty regime, as much as we appear locked into a carrot-and-stick way of thinking about relations with North Korea. It can be mutually beneficial. We have the potential to gain as much as they do. Breakthroughs might be sudden and surprising, but they are usually underpinned by creative thinking, dialogue and the mutual acceptance that no one can get exactly what they want.

Unfortunately, this particular trip does feel somewhat like a gift, coming as it does on Kim’s birthday and less than a month after the violent and very public purge of his uncle and second-in-charge, Jang Song Thaek.

Had Rodman pulled out or delayed, the channel for opening may well have closed. If he really is in it for the long haul, he probably couldn’t afford to slight the leader on his birthday.

Domestically, it is great PR for Kim. He gets to appear gregarious and inclusive in front of his people. Notwithstanding Jang’s execution, this is the image he has been assiduously cultivating. He’s eager to promote his friendly, approachable image while at the same time enjoying watching some former stars play his favorite sport.

For now, little will come out of Rodman’s visits other than extraneous news. But as Pyongyang continues to devote resources and energy to sports development, its appetite for athletic exchanges will increase. Let’s warily hope, to use Rodman’s phrase, that this can “open the doors” to other things.