Kim Jong Un’s urging to “put an end to slander and calumny that brings no good to either side,” and his offer to “join hands with anyone who opts to promote inter-Korean relations…regardless of his or her past,” goes a step beyond the line he took in key speeches in 2012 and 2013, signaling an intention to keep the door open for inter-Korean dialogue. Kim’s remarks on January 1, 2014 suggest that there will be more concrete North Korean proposals forthcoming. The beginning of the year is often the time when these have surfaced in the past. 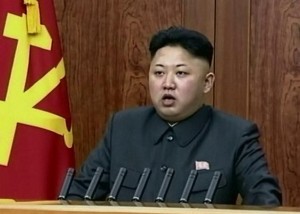 Overall North Korean media have been surprisingly restrained in the treatment of ROK President Park Geun-hye. In an illuminating break with normal patterns of comment, the harshest criticism of Park has appeared in statements issued under the name of the National Defense Commission, but there has been little or no follow up by lower level media articles, as if to indicate that criticism of Park continues to be carefully modulated. That is in sharp contrast to the way Pyongyang treated Park’s predecessor, Lee Myung-bak.

Recent events have reinforced the signals that Pyongyang continues to hold open the door to engaging Park more fully at some point. In the aftermath of Jang Song Thaek’s execution, with high-level condemnation by authorities in Seoul, the North Koreans went ahead with a meeting at the Kaesong Industrial Complex, and even briefly reported it in positive terms.

Both Korean leaders are new, to some extent untested, and in typical fashion, appear to feel the need to demonstrate toughness to the other side before moving to a more fruitful mode of engagement. On the North’s side, there is the added factor that Park Geun-hye once traveled to North Korea and met with Kim Jong Il, giving her something of a special status. At times, that appeared to have been wearing thin, but Kim’s New Year’s remarks suggest that there will be more concrete North Korean proposals forthcoming. The beginning of the year is often the time when these have surfaced in the past.

Many times over the past 30 or 40 years, the two sides have started dialogue by agreeing to stop slander of the other. It’s a relatively easy (and verifiable) first step. By raising it, Kim would appear to be signaling that he’s prepared to start off with something concrete, if modest, in order to open the door.

The Flashpoints series has been made possible through generous support by the Carnegie Corporation of New York.