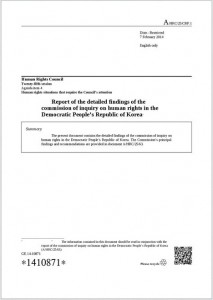 This week in Geneva, the UN Human Rights Council (HRC) has an opportunity to do something important when it considers how to respond to the 372-page report of the Commission of Inquiry on Human Rights in North Korea (COI). As Amnesty International’s Secretary General Salil Shetty has written, “A strong resolution needs to be adopted sending a clear message…that the Commission’s recommendations will be acted upon and not kicked into the diplomatic long-grass.”

Avoiding the long grass will require some creative leadership by members of the HRC and the UN Security Council (UNSC).

For more than 20 years, the international community has struggled to rein-in the nuclear ambitions of the Democratic People’s Republic of Korea (DPRK), while largely turning a blind eye to the root causes of the suffering of the North Korean people. It was perhaps understandable that diplomats would focus their energy on curtailing the North’s pursuit of plutonium rather than concentrating their efforts on improving the lives of average North Koreans. The North’s nuclear ambitions and its development of ballistic missiles—witness this week’s Nodong missile tests—pose a direct threat not only to the DPRK’s neighbors, but also to the broader objective of global nuclear nonproliferation. And after all, until recently, no one had compiled a comprehensive record of the systematic brutality imposed upon the citizens of the DPRK by their own government.

But that excuse for inaction no longer exists.

In a report as remarkable for its lack of hyperbolic language as for its stunning conclusions, the COI has documented a litany of human rights abuses inside the DPRK, including torture, rape, execution and mass incarceration of prisoners of conscience under horrifying conditions. As my colleague Roseanne Rife, East Asia Research Director of Amnesty International, recently wrote, “The gruesome reality of life in North Korea is laid bare in the Commission’s comprehensive report. The gravity and nature of human rights violations are off the scale.”

The key findings of the commission include the following:

The COI found that crimes against humanity have likely been committed by North Korea, and it has written to North Korean leader Kim Jong Un, warning him that senior officials may be held responsible.

So now the question is no longer whether the North Korean government is responsible for systematic violations of human rights. The question is what realistically can be done about it.

Ideally the United Nations will rally and take action to address the concerns raised by the COI report. Navi Pillay, UN High Commissioner for Human Rights, put it this way: “[The Commission of Inquiry] has published a historic report, which sheds light on violations of a terrifying scale, the gravity and nature of which—in the report’s own words—do not have any parallel in the contemporary world. There can no longer be any excuses for inaction.”

Or as Shetty said recently: “The international community will have failed the millions of people whose suffering is unimaginable if political wrangling once again obstructs effective action.”

The members of the HRC should seize this opportunity and use their power and influence to coax a reluctant UNSC into action. The United Nations should publicly and privately urge the North Korean government to act on the Commission’s findings, and it should be prepared to devote its own resources and expertise to support initiatives that will promote greater respect for human rights inside the DPRK.

Unfortunately, all of the early indications are that mobilizing the UN Security Council and persuading the DPRK to listen to its admonitions won’t be easy. With China, Russia and Cuba back on the HRC, getting a strong consensus for the first step—submission of North Korea’s human rights situation to the UNSC—is not a given. And assuming the Security Council does take up the matter, China is almost certain to block the most serious possible outcome—referral to the International Criminal Court for investigation of crimes against humanity. Even getting a strongly worded statement out of the UNSC, much less a binding resolution, will be a challenge given China’s posture.

At best, the HRC and the UNSC seem poised to shine an unwelcome spotlight on North Korea’s human rights record and to approve continued modest efforts to collect evidence of crimes against humanity that could be used in the future.

But “naming and shaming” alone will not positively influence the North’s behavior, and for now, the prospects for any sort of justice/accountability mechanism are remote.

The DPRK’s state-run news media KCNA wasted no time in denouncing the UN report as libel based on fake evidence manufactured by the United States and other hostile forces. “The DPRK [North Korea] once again makes it clear that the ‘human rights violations’ mentioned in the so-called ‘report’ do not exist in our country.” Later, KCNA personalized its attack, condemning Michael Kirby, the distinguished Australian judge who led the COI, saying his mission was “…to manipulate ‘evidence’ on the orders of Washington, lie about (North) Korea and oppose the republic under an international alliance that is controlled by the United States.”

Shaming alone also is unlikely to convince North Korea’s “enablers”—especially China—to change their behavior. No country has more influence over the path of the DPRK than does China (although foreigners often exaggerate that influence, wrongly believing that Beijing can dictate policy to Pyongyang). But China has made plain its contempt for the COI, which probably would never have been brought into being by the HRC in the first place had China not rotated off the Council in 2013.

Speaking in Geneva last week, Chen Chuandong, a counselor at China’s UN mission, said the COI had made “unfounded accusations.” Dismissing the Commission’s findings, he said, “The inability of the commission to get support and cooperation from the country concerned [DPRK] makes it impossible for the commission to carry out its mandate in an impartial, objective and effective manner.”

Of course, China, which normally stands on principle against foreign criticism of the “internal affairs” of other states, did not lift a finger to encourage Pyongyang to cooperate with the COI. And Chen conveniently forgot to mention that Pyongyang had resolutely refused to allow a visit by the commissioners, who had repeatedly requested access to the North to discuss the growing mountain of evidence, including eyewitness accounts and satellite images commissioned by Amnesty International, USA, pointing to widespread human rights abuses.

China’s “catch-22” attitude here parallels its three-part treatment of allegations of human rights abuses inside China, especially in remote regions such as Tibet or Xinjiang:

What Should Be Done?

Given the DPRK’s refusal to cooperate with the COI, and assuming China intervenes to prevent the UNSC from referring the situation in the DPRK to the International Criminal Court, what can the international community do that might begin to fulfill its “responsibility to protect” those suffering inside the DPRK?

Some will call for more sanctions and pressure. One can easily envision the talking points from Washington. A senior government spokesman will solemnly declare: “North Korea has a strategic choice to make…it can choose the path of denuclearization and respect for international norms, or it will find itself increasingly isolated from the global community.”

This mind-numbing mantra—a policy of “strategic patience” thinly masking the symptoms of diplomatic sclerosis—will not do diddly-squat to help the North Korean people. The daily tragedy of life inside the DPRK will almost certainly continue unless the international community becomes more creative and much more committed to a sustained process of principled, comprehensive, top-to-bottom multilateral engagement.

There are a few modest steps that could be taken in response to the COI’s report that might actually work over time to improve human rights conditions for the North Korean people, including those living outside the DPRK. For instance:

Longer-term, a Helsinki-style multilateral initiative offers the best hope of creating an environment in Northeast Asia conducive to peace and security and respect for human rights. Attempting to isolate the DPRK has not worked, and isolation will not help create the conditions necessary for those responsible for crimes against humanity to eventually be brought to justice. More sanctions—piled on top of some of the most comprehensive sanctions ever imposed on a country—are unlikely to bring about an epiphany in the thinking of North Korea’s leaders when it comes to human rights.

Only pressure from within—brought by a generation of North Koreans who have more contact with the outside world and a deeper understanding of the failure of their own government to deliver justice and development to the people—is likely to convince the leaders of the DPRK to change course and begin to change the conditions now chronicled for all the world to see.