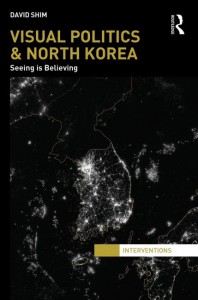 David Shim’s new book represents a groundbreaking intervention—not in the study of the country named in the book’s title, Visual Politics and North Korea, but in the study of how we come to know a country known as unknowable. That process of knowing—or more accurately, imagining—happens primarily, the book contends, through images. Indeed, a popular and profitable knowledge-industry comprised of scholarly, journalistic and cultural work on North Korea has emerged over the past decade or so, manufacturing voyeuristic glimpses into the “real” North Korea through such visual modes as documentary photography and satellite imagery. These representational practices are invested with immense political value because: a) anything the North Korean government shows or tells is immediately branded as a lie; and b) they promise unmediated knowledge of what North Korea’s lies are trying to hide—the willful incompetence and malfeasance of the North Korean leadership. In short, what we (are allowed to) see both shapes and confirms what we already know to be true. Thus, given that documentary photography and satellite images work to construct a “visual imaginary” of North Korea from which nuclear inspections are endorsed, refugee rescue missions mobilized, and military strikes considered, it is crucial, Shim insists, for those who want to have a better understanding of North Korea—or rather, how the world relates to North Korea—to scrutinize how and why, exactly, these images work.

As an Assistant Professor in the Department of International Relations and International Organization at the University of Groningen (The Netherlands) and Associate Research Fellow at the German Institute of Global and Area Studies (GIGA), as well as a former food aid monitor for the United Nations World Food Program in North Korea, Shim’s academic credentials and first-hand experience in North Korea appear to contrast with the book’s focus on visual representation. But Shim demonstrates a thorough understanding of the theories and methodologies of representation, which he imparts in an accessible first chapter. He places particular focus on how and why photographic essays achieve their rhetorical force as referents of the real through the logic of inclusion and exclusion.

The chapter, “Seeing on the ground: everyday photography and North Korea,” explains how documentary photographs of North Korea’s daily life offer testimony about the domestic situation to an outside audience. Shim then close reads (the careful, sustained interpretation of a brief passage of text or image) Tomas van Houtryve’s award-winning documentary photographic essay, “The Land of No Smiles,” which appeared in the 2009 issue of Foreign Policy.

The next chapter, “Seeing from above: satellite imagery and North Korea,” examines the relationship between visuality and (geo)political practices, the complex technical processes involved in giving satellite imagery the illusion of providing transparent, immediate information of, among other things, events and developments related to a “rogue” state’s missile and nuclear programs, and how these manipulated images legitimize political, diplomatic or military action.

Shim then close reads a satellite image of Northeast Asia at night, which shows a blacked-out North Korea encircled by the bright lights of South Korea, Japan and Northeast China. As Shim reminds us, both former Secretary of Defense Donald Rumsfeld and Barbara Demick, the author of the award-winning book, Nothing to Envy: Ordinary Lives in North Korea, used this image as incontrovertible evidence of North Korea’s status as a “failed state.” Thus, “what documentary photography and satellite imagery of North Korea have in common is that they what they show gives rise to certain knowledge claims, which, in turn, inform the severe ethical and political accusations made by various actors (for instance, national governments, international organizations and non-governmental organizations) against North Korea” (40). The book concludes with a discussion of the epistemological conundrum presented by the figure of the North Korean defector.

Shim argues that the belief that documentary photography and satellite imagery reproduce reality and truth exactly as they are is misguided. Rather, they produce a subjective interpretation of who or what deserves representation. In the case of North Korea, this subjective interpretation, or “hegemonic form of visuality,” funnels everyday life in North Korea through the prisms of isolation, scarcity and bleakness, and portrays North Korea in general as different, distant and other. These meanings circulate and become the “common sense” by which we want to either save the North Korean people (who we believe want to be saved) or punish the North Korean leadership for supposedly oppressing its own people. By excluding other ways of seeing North Korea, Shim contends, we lose sight of its complexities, and by extension, we lose sight of alternative modes of engagement.

Many of Shim’s close readings of hegemonic representations of North Korea effectively support his argument. For example, one photo from “The Land of No Smiles,” entitled “Uneasy Street,” captures one of the main thoroughfares in Pyongyang devoid of cars and people. The dark, colorless composition of the photo accentuates its dreary mood. Van Houtryve’s commentary accompanies the photo, arguing that the main street of a capital city should be a vibrant space filled with traffic and strolling couples. This photo appears to provide direct, unarguable evidence of North Korea’s failure to construct the “socialist paradise” that its ideological architects proudly proclaim to the world. However, Shim points out that van Houtryve neglected to mention that the photograph was taken in February, the second-coldest month in North Korea, and that it was taken on a Sunday, which is a day of rest for North Koreans. So why, Shim rightly asks, would anyone walk around in the freezing cold on his or her only day of rest? This is precisely the logic of inclusion and exclusion at work.

To counter the popular motif of the empty North Korean street, Shim discusses photographic essays by Associated Press photographer Vincent Yu and Guardian photographer Irina Kalashnikova that show various scenes of daily life in Pyongyang and the countryside, ranging from a family enjoying a picnic near the Taedong River to a smiling farmer sitting in his humble home adorned with a television, a fan and several wall furnishings. These photos, Shim contends, “emphasize affinity, familiarity, and sameness over difference, distance, and otherness” (121). What’s important about these photos, Shim argues, is not that they offer a “true” account of “real” North Korean life, since these photos are selective, incomplete and open to appropriation as well. The point is that “they contest predominant assumptions and imaginations about (life in) North Korea, and unsettle the boundaries needed to delimit ‘us’ from ‘them’” (88).

Shim argues that a counter-hegemonic image is not necessary, because satellite imagery, far from self-evident, is in fact, open to multiple readings. “For instance,” Shim argues, “the constructed visibility of the night-time satellite photograph would gain a different meaning when interpreted in view of an ecologic discourse that problematizes not the lack of light but, on the contrary, its excessive application and the damage it causes to natural ecosystems and physical health” (103). This satellite image, then, can be read as an indictment of the destructive excesses of Western modernity, rather than the developmental “backwardness” of North Korea.

It also does nothing to historicize the multiple political and economic factors for how North Korea arrived “in the dark,” so to speak. Indeed, we are the ones left in the dark, with only Rumsfeld and Demick to provide the light of common sense answers (North Korea is evil, the North Korean economy has been mismanaged, etc.) that we don’t even need, since the image “says it all.” In addition, daytime satellite images of the Korean peninsula challenge dominant motifs of difference, distance and otherness by displaying geographic features, such as forests and mountains, which reach into both Koreas, and thus emphasize intimacy, unity and sameness.

While the counter-hegemonic photographic essays are effective in challenging the conditions of seeing and imagin(in)g North Korea, these images actually fall within and reinforce the very terms of seeing and being that he seeks to critique. That is, Yu and Kalashnikova’s project to restore in the North Koreans a dignified humanity stripped from them by photographers like van Houtryve—through such scenes as a family happily enjoying a picnic near a river, or a man sitting next to consumer items like a TV and a fan—actually reproduces a notion of the human itself that could be considered hegemonic (that is, legible personhood defined through belonging to the heteronormative family unit or ownership of consumer household items).

This is the risk of any “counter-hegemonic” or restorative project that attempts, for example, to show how North Koreans are “just like us.” One risks erasing the very real differences in how North Koreans conceive of personhood, freedom, modernity, etc. To be fair, Shim does touch upon this point in his concluding discussion of North Korean defectors and cross-border movement, when he proposes that, because most North Koreans who cross the North Korean-Chinese border actually return to North Korea, and most North Koreans do not leave in the first place, one has to consider the unpopular idea that many North Koreans might actually be happy, and happy in a way that most of the world may not be able to understand. In other words, there might be another way of being in North Korea that cannot be captured by van Houtryve, Yu or Kalashnikova. Or we simply cannot see it.

Relatedly, while the book is exemplary of interdisciplinary scholarship, I would have liked to have seen an engagement with critical Cold War literature, such as Jodi Kim’s The Ends of Empire and her notion of the “politics of refusal,” which seems especially appropriate in the case of one of most obstinate countries in the world. That is, instead of trying to absorb North Korea into the field of legibility, what would it mean to think of North Korean visuality through an intentional unknowability? I also would have liked to have seen Shim think more deeply about the visual politics of North Korea’s performance of its own North Koreanness, or put another way, how it consciously performs these visual fantasies as political leverage. Perhaps an engagement with the field of performance studies would have helped think through the notion of North Korea (and in particular, Pyongyang) as a “stage.” Also, an engagement with Asian American studies and critical race theory would have helped historicize the ways in which North Korea’s leadership gets racialized as a yellow peril dictatorship.

Disciplinary differences notwithstanding, Shim has offered a nuanced, challenging and timely work on the visual politics of North Korea. In a way, the title does not do justice to the work being done—the book is more about the visual politics of how the world (particularly, the United States) imagines North Korea. That is, these visual representations say much more about our desires and our ideological conditioning than it says about North Korea’s desires or ideological conditioning. Thus, this book is essential reading for anyone interested in the politics of visual culture, for those in the field of Critical International Relations, and for anyone interested in North Korea’s place in the world.