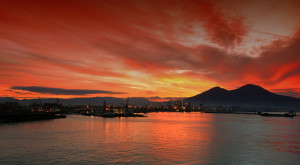 While several other areas in the world have gone completely to hell, Northeast Asia seems only to be rumbling, like Mt. Vesuvius in a long-ago August. The situation now, as then, looks grim, but many people apparently cling to the hope that the little earth tremors and the noxious gas venting from the various fissures will stop in a couple of months, and we can go back to whatever it was we were doing. The ROK’s August 11 proposal to Pyongyang to begin high-level talks “to discuss family reunions and other pending inter-Korean issues in a comprehensive manner” seems a little like throwing a cup of water into the volcano to quiet things down.

The most curious aspect of the current moment is the juxtaposition of light and dark. So much seems to hinge on sports, not the World Cup but the upcoming Asian Games in September in Incheon. Incheon! A South Korean port city on the West Sea, the site of MacArthur’s brilliant outflanking maneuver that sent the North Korean armies reeling and in retreat for all of a couple of months until the Chinese sprang their own trap. The North Koreans have said they want to go to Incheon to attend the games. A decade ago, they took part in games in the South Korean city of Busan, a place they almost reached by other means in 1950. Their cheerleaders wowed South Korean audiences then—at the games, not in 1950—and likely would again.

On July 20, Kim Jong Un himself was cited by DPRK media as saying while at a soccer match, “The participation of the DPRK’s players in the 17th Asian Games offers an important occasion in improving the relations between the north and the south and removing distrust between them.” The substance of what Kim said was perhaps less notable than the timing and his entourage, prominent among which was Kim Yang Gon, long-time party secretary in charge of South Korean affairs who had been out of public view for an extended period.

Kim Jong Un’s remarks came only a day after a very negative DPRK statement charging that the Blue House itself had scuttled the talks at which the two sides had discussed the North’s participation in the Incheon games, including a large contingent of North Korean cheerleaders. In effect, one might conclude, Kim was suggesting he won’t take “no” for an answer from ROK President Park Geun-hye and, implicitly, that it would be good if she reconsidered what looked to be a bumbling, negative South Korean position at the sports talks. A good question is whether or not the Blue House’s latest proposal—in tandem with remarks Park made last week suggesting new flexibility in the South’s approach to Pyongyang—will be read in Pyongyang as a serious gesture or a cynical ploy. Both sides, obviously, know something about cynical ploys.

So which is it? Is the situation still fluid? Or is it better to believe the North’s moves are just sheep’s eyes towards Incheon, an elaborate diversion meant to keep our focus from all of the Korean People’s Army’s testing of artillery and missiles over the past few months in preparation for an ugly August once the US-ROK joint military exercise Ulchi-Freedom Guardian (UFG) gets underway. So no one could miss the point about how seriously Pyongyang is about operationalizing warnings in Rodong Sinmun about plans for countering US-ROK maneuvers, North Korean media carried dramatically posed photographs of Kim Jong Un observing the firepower exercises.

Ulchi Freedom Guardian is, as Washington and Seoul both emphasize, an “annual exercise.” Regularity does not make it any more palatable to Pyongyang, nor does the fact that the exercise does not involve actual combat training, though it does involve tens of thousands of US and ROK troops in computer-driven scenarios. Last year, the North adopted a different approach, taking a noticeably low posture toward UFG, virtually ignoring the exercise apparently in hopes that this would elicit a positive response from Seoul and Washington. It did not.

Since January, the North Koreans have been saying, in public and private, that in order to open the way for reducing tensions and finally getting on the path of constructive inter-Korean engagement, something needs to be done about US-ROK exercises. Whether this means they should be permanently scrapped, temporarily suspended, or dialed back is not clear nor, so far as is known, have the possibilities been probed.

Now, there is no time left. Ulchi Freedom Guardian is about to get underway. What is going to happen, almost certainly a bad action-reaction cycle, is inevitable. Judging by a stream of commentaries over the past few weeks in Rodong Sinmun, someone important in the DPRK has decided that the US-ROK failure to take seriously Pyongyang’s earlier offers means that that a tough response is the only answer—more artillery exercises, more missile launches, and possibly even a nuclear test. Ominously, Pyongyang has in recent days revived language from Kim Jong Un’s March 2013 plenum speech that the “nuclear armed forces should be expanded and beefed up qualitatively and quantitatively.”

And yet, as of now, the North Koreans have indicated that they still plan to go to the games at Incheon, scheduled to open barely a month hence. They still seem to think that their being at the games will provide the opportunity for new steps in inter-Korean relations. Certainly, that is what Kim Jong Un indicated in his curiously timed, positive comments about the games.

Yet, how will the North Koreans be able to go to the games if the situation deteriorates too badly this month during UFG? Have they made a choice that their military posture is more important than anything else? Or are they miscalculating, believing they’ll be able to do both—show a tough military response and then participate in the games to advance inter-Korean engagement?

In fact, it is beginning to look as if the North Koreans do not see much likelihood that anything can be done on the dialogue front with Seoul. In their view, so it seems, President Park has been all slogans and no substance. That view may be reinforced by a widespread feeling in South Korea among people who might normally be expected to be charitable toward her that Park doesn’t know what she is doing. In contrast to the view espoused in Washington that she is showing herself to be steady and effective in blunting the North Korean maneuvers, there is a growing belief in Seoul that she is fumbling, perhaps not least because she lacks any adviser who knows the ins and outs of the long inter-Korean game. Even the conservative Chosun Ilbo, for heavens sake, thinks that she is wasting time and ceding ground to the Japanese in terms of positioning with the DPRK.

Meanwhile, the Russians appear to be moving into North Korea on little cat feet, while the Chinese are wringing their hands that they are increasingly on the outside looking in. A good question is whether, in view of the sharp deterioration of Moscow’s relations with Washington and the ice-water now coursing through the veins of Sino-DPRK ties, Russia considers North Korea as leverage waiting to be exercised. Moscow’s righteous view of itself as a counterweight to American power worldwide could soon overlap, if it hasn’t already, with Pyongyang’s need for support, psychological and logistical, against what it sees as an increasingly hostile US. From Beijing’s viewpoint, Chinese efforts over the past year to construct a diplomatic bridge that, however rickety, could facilitate US-DPRK contacts leading to actual progress, have all failed, not least because of Washington’s unwillingness to play its part. The result, some Chinese officials fear, is that they have less influence than ever in Pyongyang and that with deterioration in Sino-DPRK relations at the same time Sino-ROK ties are improving, the North Koreans will conclude that their legitimate strategic interests are being ignored.

Maybe this is not Pompeii yet. But we are getting there.