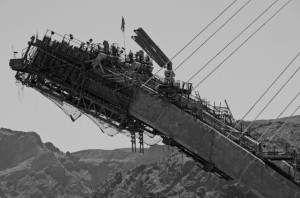 Here we are, almost at the end of the US-ROK joint military exercise Ulchi Freedom Guardian (UFG), and the situation is eerily calm. DPRK commentary at the start of the exercise last week was relatively restrained, especially in view of the warnings the North had issued over the preceding months. Meanwhile, North Korean reaction to numerous recent ROK offers to reengage has been of the kicking-the-tires variety. So, is it safe to ask: Are we out of the woods? Have we successfully tiptoed past Vesuvius?

For once, we appear to have stumbled into a charmed glen of rationality. Well, maybe that’s an overstatement, but we can work with the image for now. So far, signs that things are heading in the right direction come not so much from something the North Koreans have said, but from the sounds of silence. Indeed, one of the hardest things to teach new analysts is how to listen for what isn’t said, and then figure out what it means.

In this case, at this point, we have no direct, explicit public North Korean response in official DPRK media to:

In the make-a-noise column, the North’s Committee for the Peaceful Reunification of Korea (CPRK) issued a statement on August 13 that, while not responding explicitly to ROK proposals, signaled the door was open to engagement by, in effect, laying out what the North’s agenda would be if talks materialized. In addition, there was a quick, albeit relatively gentle, Rodong Sinmun commentary responding to President Park’s August 15 Liberation Day speech. In her speech, Park again offered to hold high-level talks, warned the North about its nuclear and missile programs, and suggested a few concrete steps for early cooperation between the two sides. Aside from the usual riposte that it wasn’t the North but the South that was causing problems, Rodong Sinmun did not explicitly reject Park’s call for talks, and referred back to the “basic issues set forth in the CPRK statement.” That article was followed two days later by an equally restrained commentary in Minju Choson on Park’s speech, also referring back to the ideas in the CPRK statement.

In contrast to its treatment of the South, the North Koreans over the past week have hauled out the heavy rhetorical artillery to use against the United States, especially aimed at Secretary of State John Kerry rather than at either Seoul or UFG. What stands out in this commentary has been crowing that the US is on its last legs, i.e. not such a huge threat to the North. This propaganda thrust started on July 11 with an unusual KCNA “white paper” detailing why the decline of the US was inevitable. It has now even reached the point that someone in Pyongyang has apparently dragged out an old copy of Gibbons and juiced up a National Defense Commission Policy Department spokesman’s statement (August 20) with a comparison between the US and the decline and fall of the Roman Empire.

This portrayal of the US has interesting policy implications. Skeptics might say it portends bad days ahead if the North has miscalculated and thinks the time is right to attack the old, blind, stumbling lion. A better hypothesis in my view is that, by suggesting that the DPRK “deterrent” has been built up enough and the US is on its way down, Pyongyang is creating space for a decision to move resources away from the defense industries and to the civilian sector. Kim Jong Un suggested in April 2012 he might be ready to do just that, only to have to reverse himself a year later.

More to the point of what is going on at the moment, does this formulation (DPRK up, US down) open the way for increased engagement with the ROK, especially given the charge that the US is “compelling” the South to carry out big joint military exercises—i.e. it isn’t that Pyongyang can’t deal with Seoul, it is that Washington is getting in the way. Given the North’s silence or gentle handling of ROK proposals for dialogue over the past month, it is worth wondering whether this is meant to open up room to maneuver, allowing Pyongyang to step into the negotiating arena soon after the current US-ROK exercise is over.

Despite warnings that UFG and other events (such as the minor clash in the West Sea a week ago) threatened the atmosphere for the upcoming Asian Games in Incheon, the North has pushed ahead with preparations for the games, even sending sports officials to the South on August 19—in the midst of UFG—to look at the facilities. And a KCNA commentary on August 20 underlined a carefully deployed theme that a “peaceful environment is very dear for the DPRK’s development of economy and improvement of the people’s living standard.” It is not a question of whether or not one thinks Pyongyang is “sincere” in this regard, but what the use of that formula has often signaled about the DPRK’s intent to move to a policy of engagement rather than confrontation.

Bottom line: The simplest hypothesis is that both sides are building a bridge that will get them across what still may be rough developments during the remaining week or so of Ulchi Freedom Guardian. Of course, they are each building the bridge starting with their own engineering concepts. Whether it will actually meet in the middle is anybody’s guess.