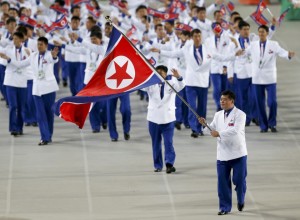 Sports are always political. International sports competitions especially can serve many purposes, such as an outlet for nationalist sentiment—in a my-country-is-better-than-yours sort of way—or as a distraction, a galvanizing force or even as a major event that can signal its coming of age. (The 1964 Tokyo Olympics, the 1988 Seoul Olympics, the 2008 Beijing Olympics were all events that signaled the new or renewed global importance of the host city.) Finally, there is the rare occasion when sports can play an important diplomatic role, giving governments an opportunity to build new political bridges.

Granted, while enough happened at the Asian Games to satisfy nationalist pride for both Koreas, the games fell short as a prestige event and will not be considered a great victory by the Republic of Korea over the Democratic People’s Republic of Korea. Whether the visit of three top North Korean officials and their meetings with senior representatives of the South Korean government represent an important turning point in inter-Korean relations also remains to be seen.

In November 2012, the DPRK’s Political Bureau established the State Physical Sports and Culture Commission, a 32-member organization that now oversees sports and athletics in the DPRK. Jang Song Thaek was originally installed as the head of this commission, but after Jang’s purge, the post now belongs to Choe Ryong Hae, who has been eased out of military affairs.

Around the same time, slogans revolving around North Korea becoming a “Sporting Powerhouse” became common. The government devoted resources to refurbishments and upgrades to elite sporting facilities and training programs as well as to programs encouraging mass participation in sports, centered on neighborhood or city center facilities. These are also effectively urban renewal projects, improving the quality of life while the authorities consider making more difficult but more important adjustments to economic policy. Winning athletic competitions on the international stage also provides expression for nationalism and a rallying point: particularly useful if the leadership decides it needs some quiet time without military incidents, which are a traditional rallying point.

Doing well at these games allows DPRK authorities to champion the essential rightness of their sports policy and their beloved socialism that produced it. (It fits nicely with their classic “if we say we do it, we do it—we don’t speak empty words” slogan.) The DPRK came in ninth in the medal count at the 2002 Busan Asian Games, but it fell to 16th at the 2006 Doha Games and 12th at Guangzhou four years ago. Finishing 7th this year represents its best tally since the end of the Cold War, with North Korean athletes breaking several world records in weightlifting.

North and South Korea don’t have a track record (pun alert!) of using sports diplomacy to deal with each other, making the last minute visit of a high-level delegation from Pyongyang even more surprising. Rather, sports have been used to compete for prestige, in which the most notable victory was South Korea’s successful hosting of the 1988 Olympics.[1] It is not an overstatement to suggest that successfully hosting the Olympics was Seoul’s single greatest triumph over Pyongyang. North Korea didn’t attend, but it did participate in the 2002 Asian Games in Busan, with the South covering much of the North’s expenses. At that time, there was high South Korean public interest in the Northerners and in the teams marching in together under the unification flag.[2] However, the key breakthroughs had taken place in the years prior, most notably at the first inter-Korean summit meeting in 2000. The 2002 games were an exercise in public diplomacy more than diplomacy between governments.

In contrast, the run-up the Incheon Asian Games could be summarized with the phrase, “you can come, but we’re not doing anything particularly special for you.” This fits in with Park Geun-hye’s vision more broadly, seeking a road somewhere between Lee Myung-bak’s hardline and the Sunshine policy days. The South refused to pay for North Korea’s squad of beautiful ladies (so they didn’t come) and made no accommodations for North Korean reporters, who, facing the ROK’s normal blocking of DPRK websites, could not access their networks to file stories. Nor did the South make any special concession for DPRK flags outside stadiums. (One curious thing to note, however, is that Seoul had agreed, in principle, to pay something towards the cost of the North’s participation, though even as the games ended, it didn’t look as if the details had been settled upon.)

Pyongyang was disappointed that Seoul was not in the mood for a charm offensive, led by its lovely lady cheer team. It complained that, “the South side openly slandered the decision to send the cheerleading squad, asserting it is a ‘group for political operation in the South’ and ‘for creating discord in the South.’”

One suspects that Seoul was aware of its leverage: Pyongyang’s sports policy essentially meant that the chance for North Korean athletes to compete—with their world class weightlifting corps in their prime—was too valuable to pass up.

Surprise! Sports Diplomacy After All

Despite the various points of contention, North Korea did spring a surprise on the penultimate day of the competition, notifying Seoul that three of its highest officials wanted to attend the closing ceremony the next day. Seoul granted permission to Kim Yang Gon, Hwang Pyong So and Choe Ryong Hae, sparking a media frenzy and wide speculation about the reasons for the visit. The trio had lunch with South Korean Unification Minister Ryoo Kihl-jae and Defense Minister Kim Kwan-jin. They are reported to have said that Kim Jong Un’s health was not an issue and to have delivered a message of “warm greetings” from Kim Jong Un to President Park Geun-hye. An October surprise, indeed.

That might all be interesting, but did Pyongyang put anything of substance on the table to back up a potential charm offensive? It is not yet known, though something may emerge at high-level talks agreed upon for later this month or in early November. This proposal is also somewhat of a surprise, given that North Korea rejected a similar proposal made by Seoul in August.

Seoul, while looking to shift its North Korea policy somewhat, is wary of moving too fast and has not said much about the visit. If an improvement in relations takes place in the rest of Park’s term, we may be able to point to this meeting as an important part of that process.

The trip certainly signals willingness on North Korea’s part for more direct communication. The factors motivating Pyongyang to make this gesture remain unclear at this point, but it could be a combination of several things.

First, Pyongyang wants more non-Chinese investment and understands, in particular, that its grand plans for Wonsan as a tourist destination will ultimately not get far without South Korean capital and visitors. This is especially true if Japanese connections to Wonsan are not rehabilitated. Promising DPRK-Japan talks earlier this year on the abduction issue seem to have stalled as Pyongyang has delayed a key report due in early autumn. Pyongyang may have decided the chances of getting the abduction issue right are too low to justify the risk. Creating an outreach effort to the ROK could be an alternative.

It could also be a test of Park Geun-hye’s trustpolitik as she comes up on the mid-point of her term: this is around the time that she would need to start an initiative if she wants to see it bear fruit under her administration. However, Park has consistently said that aid and investment into the North would increase if steps towards resolving the nuclear issue were taken. We’ll know later if Pyongyang is able to put anything on the table that doesn’t undermine its ‘Byungjin Line’ (dual nuclear/economic development) but this type of reciprocation is something she feels she can work with. This is a narrow window though, and in initial follow-up talks Pyongyang may just be testing to see what it can get while avoiding the nuclear issue for as long as possible.

If she does appear to compromise, it quickly becomes a test of ROK-US relations. Washington was not so keen on Japan’s solo outreach to the DPRK earlier this year; it likely will not be thrilled if its other key ally breaks ranks as well. Pyongyang is always happy to foment divisions between Seoul and Washington when it can.

Finally, it shows Beijing that Pyongyang is ready to ‘play nice’ with its neighbors. After serious stresses between the two allies in the past 18 months, reaching out to Tokyo and Seoul shows China that the DPRK doesn’t have to be a disruptive force while at the same time signaling that Pyongyang may not always be as beholden to China’s economic might as it is today.

Sports diplomacy only works when both governments are actively seeking some sort of shift in relations that an athletic event can help facilitate. It is far from clear that this is what is happening, but suddenly it is a prospect that we are now compelled to watch.

Even if this new North-South dialogue goes nowhere, for both countries the Asian Games will leave a domestic legacy—this is particularly clear in the North, where the victories will be featured and used to justify the sports policy and promote nationalist sentiments. Southerners will join the list of griping citizens around the world who get stuck with the bill for costly sporting events while corporate sponsors walk away with the profits. At the same time, there will be some residual feel-good factor from besting Japan in the medal table and further cementing the ROK’s status as a regional power.

Athletes from both Koreas have and will continue to make great progress on the field. Let’s see now if their leaders can make a little progress off the field as well.

[1] For an invaluable review of this process, see Sergey Radchenko, “Sport and Politics on the Korean Peninsula—North Korea and the 1988 Seoul Olympics,” (Wilson Center North Korea International Documentation Project, 2011) http://www.wilsoncenter.org/publication/sport-and-politics-the-korean-peninsula-north-korea-and-the-1988-seoul-olympics.