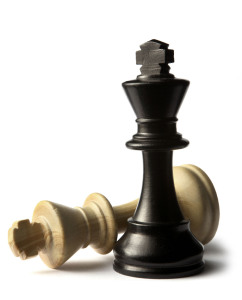 “I’ve been dealing from half a deck,” I said.

Inspector O looked up for a moment, and then returned to his close study of the chessboard in front of him. “You’re telling me?”

“No, I mean, I’ve been trying to figure out what was in your leader’s New Year’s address, and it was pretty frustrating because for most of the day it was only carried by KCNA in the most ridiculously abbreviated English version.”

“Nothing. It’s not God’s language, that’s all.” He moved a pawn.

“Nice move,” I said, looking over his shoulder at the board.

“You have to say ‘check’ if you think so. Then you say ‘check mate’ if you have actually…”

“I know the game, thank you. And I don’t have to say anything I don’t want to say.” He drummed his fingers on the chessboard so the pieces danced slightly. “Now, you had a question about the New Year’s address?”

“I did. What’s all this buzzing about summit talks? You serious?”

“Me? I’m always serious, you know that.” He grinned. “Let’s see what the little lady does in response.”

“I take that to mean your capital is actually ready for a summit with President Park?”

“OK, sit down. I’ll spell things out for you. Madam Park says she wants progress toward reunification. Maybe she wants to do what her father couldn’t. Maybe she is hungry for a spot in the history books before she runs out of time. She has 36 months left, and that isn’t very long, considering she’s behind the curve.”

“Nah, I don’t have views. Too much trouble. I’m just repeating what’s in the South Korean press. Anyway, I heard that we got tired of watching the Blue House stumble around on this stuff. We told her last year we were ready, and she couldn’t pull herself together.”

“So, how does that make the game over?” I nodded at the chessboard.

O shrugged. “We’ve put the idea of a summit in play. That’s a lot to lay on the table.”

“Sure, if you like baloney or German wurst. It’s time for her to make up her mind. Do whatever or get off the pot. We know what she said to Kim Jong Il when she met with him years ago. Did she mean it? Does she or doesn’t she want movement on North-South relations? If she does, then cut the crap on those propaganda balloons. Cut the crap on joint military exercises. She does that, and things get unstuck.”

“I don’t mean you, I mean your side. Don’t you have some crap to cut?”

“Just watch, OK? Meanwhile, let’s keep an eye on your friends in Washington, shall we?”

“I have no friends in Washington.”

O laughed. “You’re telling me! How do you suppose Washington will react if Seoul sidles up and tickles your State Department about the military exercises?”

“Ah, see what I mean? We don’t have to hope for anything. It’s up to her. She has her own byungjin line—make nice to Pyongyang, and at the same time do what the Americans say. Guess what? Ours works, but hers doesn’t. And both Beijing and Moscow are going to back us on this. No matter how she plays it, we’re fine.”

“What about denuclearization? Didn’t the New Year’s speech throw a little bomb at the Chinese?”

“You read it any way you like. It’s a free country, that’s what you say all the time.”

“You didn’t answer me. What about the nuclear issue?”

“What about it? What about Sony, as far as that goes? And what about the UN circus on human rights? Do you think she’s going to want to press us very hard if she sees a crack in the door to Pyongyang? Trust me, she’s the one who has been pressing reunification, she’s the one who has designated this year as so important for progress. Now we’ll see whether she knows how to put one foot in front of the other.”

“You are pretty sure of yourself. A little overly confident?”

“Not really.” He began taking chess pieces off the board, putting them into a small wooden box. “I just know what I see. Well, Happy New Year, pal. I’m off to see the lizard.”

“Wizard,” I started to call after him, but then I thought better of it.