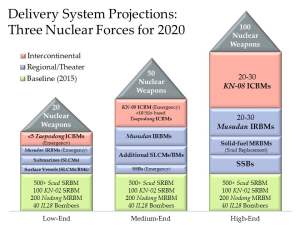 Any attempt to predict the future when it comes to North Korea is a risky but worthwhile business, worthwhile if only because of the lack of reasoned, balanced attempts to do so and the serious challenges posed by that country to international peace and security. Our recent report on North Korea’s nuclear future looking at three scenarios for its potential nuclear stockpile, delivery systems and nuclear strategy, while receiving an enormous amount of media attention, also provoked a certain amount of criticism. As the authors of the overview paper—and of the more detailed look at the future of Pyongyang’s nuclear stockpile—we would like to address those criticisms.

Some of the criticism is easy to dismiss. The South Korean Ministry of Defense spokesperson dissed our report’s finding that North Korea currently has 10-16 nuclear weapons as “simply a presumption without any evidence.” Well, we understand that governments probably have more evidence than we do, but one of us having worked in government, we can assure everyone they have less than they pretend to. Our estimate is based on the best publicly available evidence—extensive on Pyongyang’s plutonium stockpile—but less so on the North’s ability to produce weapons-grade uranium. That’s the reason why the estimate is 10-16 weapons, largely because of uncertainties about how many operating plants the North has—one or two.

The Ministry also wades once again into what Jeffrey Lewis recently called “the great miniaturization debate.” We believe, for a variety of reasons, that the North can miniaturize warheads sufficiently to place them on the Nodong medium range-ballistic missiles. The ministry disagreed and said they aren’t capable of “making” such weapons. Well, to be blunt, there are a lot of word games going on here because of the fear that saying so will spark significant concerns about North Korea’s nuclear developments. As Jeffrey points out concerning a recent episode at the end of 2014 when government officials essentially said they could and then they couldn’t, “this is now the third time something like this has happened in the past few years—a statement that North Korea has developed a nuclear weapon small enough to arm a ballistic missile of one sort or another, followed by oddly parsed statements suggesting that maybe they have not.”

On a more serious note, our long-time friend and respected colleague Olli Heinonen—a former Deputy Director General of the International Atomic Energy Agency and now a Senior Fellow at the Harvard Belfer Center for Science and International Affairs—disagreed with some of our conclusions in interviews with Voice of America and the Korean news service Yonhap. Olli’s main difference is over how many nuclear weapons Pyongyang might produce by 2020.

In projecting the future, our report lays out three scenarios based on what we know about North Korea’s nuclear weapons program but also accepting there are things we do not know. That’s why we have three scenarios. They are all based on different assumptions; the high-end scenario assumes the North Koreans make a big, successful push to produce as many nuclear weapons as they can, the low-end scenario assumes that they don’t and indeed their program makes only minor progress. The middle scenario is essentially a continuation of their current trajectory. Based on these three scenarios, we come up with a range of possible futures—from 20-100 nuclear weapons—that gives an idea of what might be possible by 2020.

Olli argues that, while Pyongyang might be able to produce enough fissile material for 100 or even 50 nuclear weapons—the number we posit in our middle scenario—the North could only produce a total of 20 weapons by 2020. We don’t know what his baseline is for how many weapons they have today but if we assume 10, that means Pyongyang can produce only 10 more weapons by 2020, maybe 1-2 per year. In short, he is saying production of fissile material is not the issue but all the other things a country has to do to manufacture a bomb beyond just producing fissile material. And he concludes that North Korea’s capabilities on this front are very limited, pointing out that at the very beginning of their programs in the 1940s and 1950s, the US and Soviet Union had extremely limited capabilities.

Of course, we are not comparing North Korea to the Soviet Union and the United States at the dawn of the Cold War. But we would disagree with Olli’s reading of history. There was a dramatic uptick in production of nuclear weapons by both countries at the beginning of the Cold War, even though nuclear weapons were a very new technology, once they decided that these weapons were essential to have in their arsenals. The US stockpile jumped from two weapons in 1945 to 299 in the span of five years and then over 2,000 by 1955 and continued to grow rapidly. It was the same for the Soviet Union. In short, any assertion that even the two superpowers could not dramatically expand production once they decided to do so just isn’t supported by the historical facts.

Second, and this is critical to understand, North Korea has not had to ramp up rapidly in developing and producing a new technology like the two superpowers at the beginning of the Cold War. It has been working on building a bomb for at least 40 years. Of course we cannot be sure when the North started to develop the capabilities to produce a nuclear weapon—a design, a production and manufacturing infrastructure and delivery systems—but all signs point to the mid-late 1970s with the results appearing in the 1980s. Those signs include beginning construction of a plutonium production reactor in 1980, high explosive tests to perfect a weapons design beginning in the mid 1980s, and construction of a large reprocessing plant beginning in the late 1980s followed by new projects to build larger plutonium production reactors.

We do not know much if anything about Pyongyang’s development of capabilities to actually manufacture bombs. We do have one data point; in 2004, a group of Americans visiting the Yongbyon Nuclear Scientific Research Center, including Sig Hecker, a former director of the Los Alamos National Laboratory, was shown what he concluded was plutonium metal fabricated by the North Koreans, an essential skill for building bombs. That was 11 years ago. At the very least, it shows that the North Koreans have been developing the skills and probably infrastructure to manufacture nuclear weapons for some time, also perhaps as long as four decades.

While the US and Soviet Union at the very beginning of the Cold War rushed to produce as many of a new technology as fast as they could, North Korea has had a long time to put in place the necessary infrastructure to manufacture nuclear weapons. Still, we are not willing to assume that means they can do it well and quickly. That is why we produced a range of estimates with the high-end assuming they could do it quickly if they had to and the low-end assuming they cannot. Olli, on the other hand is willing to make a call that they cannot do it well or quickly. We respectfully submit that we just do not have any hard information to reach such a definitive conclusion.

Finally another long-time friend and colleague, Mark Fitzpatrick, a former State Department official and now Senior Fellow at the International Institute for Strategic Studies, recently wrote a blog post with the title, “North Korea won’t have 100 nukes by 2020 but that’s no comfort.” Mark’s post is generally positive about our report and we appreciate that. But a few of his comments deserve a response. First, Mark is right that many of the press headlines hype our worst-case projection although surprisingly, most of the stories are balanced, noting our conclusion that Pyongyang is more likely to have 50 weapons by 2020.

More substantively, he seems to question our worst-case scenario by expressing skepticism about our weapons-grade uranium projection, emphasizing that “no outsider knows how well the centrifuges work.” Absolutely correct; but we disagree with his assertion that since Iran has had trouble operating the Pakistan P-2 centrifuge model, why should we assume North Korea could do better. North Korea is likely to know how to operate them better since in the 1990s, North Koreans were actually at the Khan Research Laboratory learning how to make and operate those centrifuges. But his overall point about uncertainty is on the money. That is why each of our three projections factor in different degrees of North Korean proficiency in operating centrifuges from low to high. We err on the side of caution rather than reaching a conclusion based on incomplete information.

We also have a different perspective than Mark on the implications of an Iran nuclear deal for our projections. He states that even our projection that North Korea could have 50 weapons by 2020, based on nuclear cooperation with Iran, appears unlikely if a nuclear deal is reached with that country. Once again, we disagree. That cooperation is already assumed to be limited. If there is a deal, cheating is possible, particularly since in this case it would be marginal in the overall scheme of the nuclear arrangement.

Finally, we share Mark’s admonition about the need to be cautious when predicting the threat of a North Korean intercontinental ballistic missile (ICBM). As we emphasize in our report, this is especially true for new delivery systems in the case of North Korea, which has yet to break free from its dependence on old Soviet technology. Whether Mark’s comparison to Iran’s ICBM program is politically apt is unclear; we would argue that the North may have an even stronger need to pose a direct threat to the United States. Nevertheless, motivation doesn’t necessarily translate into technical success. Once again, because of these uncertainties, we lay out three scenarios that we feel provide a roadmap for thinking about what it will take for the North to field (or not field) such a threat.