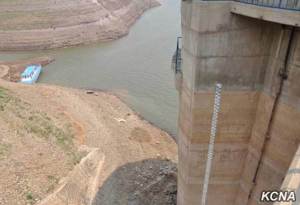 On June 16, KCNA announced that North Korea was experiencing the “worst drought in 100 years,”[1] and the story was quickly picked up by the international news.[2] Abnormal weather in the DPRK is always of concern, given the very fragile nature of the agricultural recovery that has been progressing for the last several years. Farm production in the last four years has been relatively stable at about 5 million metric tons (MMT) grain equivalent, higher than any time since 1994. That is spitting distance from the UN estimate of the minimum requirement for basic nutrition of the population, though still a long way from a varied and healthy diet. We need to be a bit cautious before anticipating a new disaster. Early last year, the DPRK government also warned about a drought crisis, but later rains allowed a recovery—while rice production fell about 10 percent from 2013, maize production hit a new high.[3] In 2012 another “worst in a century” drought was claimed,[4] but ultimately a harvest of 4.92 MMT grain equivalent (consistent with surrounding years) ensued. The 100-day drought that occurred March to mid-June of 2001 had considerably greater impact on production, but the final harvest was still better than the prior year.[5] Moreover, irrigation systems have substantially improved since 2001, and because of three new feeder canals, are less reliant on pumping (hence on electric power) to get the water from the reservoirs to the fields. But as Curtis Melvin has pointed out, satellite imagery shows reservoir levels were already low because of the low rainfall in 2014,[6] making irrigation of the newly planted rice paddies somewhat problematic.

Rainfall in the DPRK is highly seasonal, with a normally dry spring (typically 50 to 70 mm rain in March and April depending on location), an increase in May followed by the beginning of the main rains in June, when the average varies from 100 to 200 mm, again depending on location. The timing is important. Rice seedlings are typically planted in irrigated seedbeds in April, and as long as there is water in the reservoirs the seedlings can be cared for through transplanting in mid to late June. At that point, if the rains do not materialize, problems arise. Maize is planted to the fields somewhat earlier than rice, and is wholly dependent on rainfall for proper growth. In the extended drought of 2001, farmers reported replanting maize sometimes three times, as earlier plantings failed due to lack of moisture.

The KCNA article claims that no rain has fallen in South and North Hwanghae provinces. That is hyperbole. Precipitation data show a total of 181 mm at Haeju and 102 mm at Sariwon since March. While substantially below the historical average (330 mm for Haeju, unavailable at Sariwon), it is hardly “no rain.” In both locations there were substantial rains in the last several days (61 mm in Haeju, 48 mm in Sariwon). Other locations show a similar pattern of sharply lower rainfall than average, but a recent uptick: Pyongyang has had 143 mm since March, 27 mm in the last week, compared to a March-June average of 230 mm. Anju reported 202 mm since March, 78 mm last week, against a March-June average of 320 mm.[7] So while one has a right to be concerned, it’s not yet a catastrophe. If the rains of the last few days presage the arrival of the monsoon, then all may turn out fine. If there’s no change in the next couple of weeks, then we should start to worry.

All of this, of course, must be considered in the context of the overall DPRK food security situation. Meeting the minimum nutritional requirement for survival is not a high goal, but the DPRK has been unable to reach even this level at any time since the early 1990s. As far as we can tell, even with additional international aid and domestic purchases, the food supply is inadequate. The UN reports that 70 percent of the population is food insecure, lacking both a properly varied and nutritious diet and adequate insurance of a regular food supply throughout the year.[8] The 2012 National Nutrition Survey found that 28 percent of children younger than five years of age experienced moderate to severe chronic malnutrition.[9] This is an improvement over the 2009 rate of 32 percent, but hardly cause for celebration.

While North Korean farmers work with limited resources in a physical environment that has been degraded by years of overly intensive farming with application of appropriate methods, they are attempting to improve their resources. Recent changes in farm policy that give more autonomy to the smallest work groups, as well as an apparent sense of security to work a designated parcel of land for at least several years, may encourage them to invest in longer-term soil improvement, something that would help stabilize year to year production. But rainfall is vital, and as historical patterns begin to vary probably because of global climate change, past farming practices may prove to be inadequate. For the moment, we can hope that the low rainfall so far this year is coming to an end, but as is so often the case regarding the DPRK, the future is uncertain.