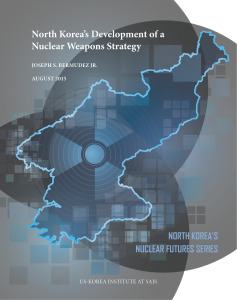 For almost six decades, the Democratic People’s Republic of Korea (DPRK or North Korea) has pursued a nuclear program that has gradually developed in size, complexity and capabilities from a small scientific research effort into a comprehensive effort to produce nuclear weapons. At present, North Korea is estimated to possess an inventory of 10-16 nuclear weapons that could rapidly expand by 2020. As this nuclear program has evolved, the North Korean leadership and the Korean People’s Army (KPA) have also gradually developed a nuclear strategy for deterrence that appears to have progressed from viewing these weapons as primarily political tools to deter an attack from the United States to operational strategic defensive weapons to inflict unacceptable losses upon attacking forces and assured retaliation, and possibly today, into viewing nuclear weapons as both strategic political weapons and for use in a range of strategic, operational and “battlefield” (i.e., tactical) situations during wartime.

This evolving nuclear weapons strategy has implications for the United States, the Republic of Korea (South Korea), China, and Japan. Up until now, North Korea has been deterred by a complex set of political and military factors. Among these are US security commitments and the presence of US military forces in South Korea and Japan, the strength and capabilities of the South Korean government and armed forces, and the desires of both China and Russia to maintain the status quo in the region. However, the combination of a growing nuclear weapons inventory, a developing ballistic missile force and a nuclear strategy that may be evolving into including options for limited use of these weapons, combined with a new, young and inexperienced leader, could heighten the fears that US extended deterrence will erode and increase the likelihood of greater instability in the region.