“This is urgent.” Inspector O was pacing the floor. He hadn’t shaved in a while, and it didn’t look as if he’d had much sleep.

“Urgent, everything is always urgent with you.” I was annoyed. Phone calls at two in the morning do not sit well with me. “You couldn’t have waited a few more hours? I need the rest. And you could use some, too, from the looks of it.”

“No time for that,” O waved me off impatiently. “This is from the top, and I mean the top. It’s urgent. Do I make myself clear, Church? Do you see the point? Do you get my drifting?”

“I need a briefing, something with substance for a change. Not one of your usual, oh-aren’t-we-great-and-aren’t-you-pathetic briefings.”

“Sure you do. Everyone does. People think it’s their birthright to look down their noses at us.”

“You want to whine, or you want to get to the point?”

“It’s a term in bridge. Cards, four players, one of whom is called the dummy.” 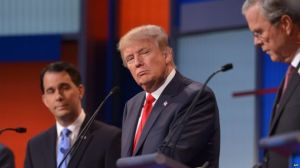 “Don’t mess with me, Church. You are supposed to be a serious country. You crow that you are all the time. Everyone else says so, too, at least in public. How is it, then, that this Donald character is doing so well in your politics? A screw or something come loose in the machinery?”

“Don’t tell me you don’t know what happened!”

“I didn’t say that. It’s complicated. I just want to explain things clearly.”

“You mean in terms even I can understand. I’m simple minded, is that it? I might not get something so complex and sublime as the politics of a democracy, is that what you’re saying? Try me, just try me, OK?”

“That’s what I thought. You really can’t explain it. You have a democracy, or say you do. As far as we can tell from what we’ve seen in the past few months it means any person with a loud tie and lot of money does well, but a person with no money can’t get near public office.”

“And the person with funny hair who talks in half sentences gets ahead.”

“You sure you want to go down that road?”

“OK, forget the hair. But we need to know what is going on. I’m not kidding. We thought we could depend on you Americans to be serious. Bush was a surprise, and we didn’t quite get his grasp of English at first, but at least he was near the park.”

“This Trump, is English his second language? Was he born here? Where does he come from? You’ll agree, he is odd.”

“I’ll agree to nothing. He was in business. He won’t last so stop worrying.”

“Do you know what the Greeks thought?”

“No, about democracy. We’re talking classics here, Church. You are maybe not familiar with classical political philosophy?”

“Careful, Inspector. I studied classical political philosophy in college. Don’t tangle with me on this. You might go over an edge you don’t even know existed.”

He smiled, finally. “That’s always the concern, isn’t it; that we might not know where the edge is. You Americans always do, of course. That’s why this Trump person is ahead, right?”

“Go on with the Greeks, will you?”

“The Greeks thought that democracy wasn’t such a smart idea because it was inclined to fall towards mob rule, and then lead to tyranny because eventually people can’t govern themselves.”

“You read that somewhere? I think you may have skipped some pages.”

“The price of real estate on New Zealand’s South Island goes through the roof.”

“Very funny. You don’t think he’ll make it. You’re sure of that?”

“I know what it means. Listen, don’t deny it, you’re not sure Trump will lose. That’s your problem. If enough people are fooled, or annoyed, or unhappy, he gets in. Then what?”

“No, no, no. His star will fade soon. Just watch. It’s early in the process.”

“Better be soon, process or no process. They,” O pointed vaguely out the window, “can’t wait forever to get ready.”

“Meaning you haven’t yet explained how come he is so popular. And we can’t afford to bet on the fact that if he wins, he won’t do something wild. Does he have any experience?”

“He isn’t popular, I’m telling you. He is just loud. And no, he doesn’t have experience, not governing.”

O smiled again. For a moment he said nothing. Then, he yawned. “Do you like K-pop?”

“Good man, Church.” He escorted me to the door, opened it, and shook my hand. “Careful of the evening dews and damps.” He started to close the door, but then stopped and stuck his head outside. “Keep it marching on, won’t you?”

“Keep what marching on, O?”

The door clicked shut, and as I walked down the pitch dark corridor to my room, it occurred to me that if I hurried, I might still get a good deal in New Zealand.