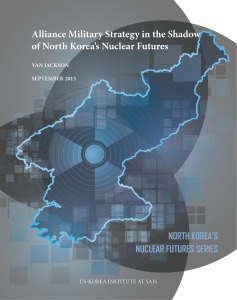 In the early decades of the Cold War when North Korea maintained only a large conventional force, alliance strategy depended on technological superiority. As North Korea gradually acquired cruise and short-range ballistic missile capabilities in addition to its conventional forces, the US nuclear umbrella and alliance missile defense capabilities took on greater salience. But as North Korea expands and improves its nuclear and missile delivery capability, the abstract promise of the US nuclear umbrella and missile defense may prove inadequate to prevent at least limited war scenarios.

This paper argues that North Korea’s nuclear posture complicates the US-ROK alliance military strategy. Even at the most modest levels of Pyongyang’s predicted nuclear development, the alliance will be faced with a strategic dilemma, for there can be no forced regime change or unification without expecting North Korean nuclear use, whether as a first strike or retaliatory.