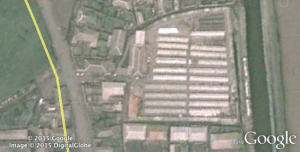 North Korea is a well-known “black hole” with regard to quantitative data. Hard numbers from the country are virtually nonexistent, and statistical information about it is scattered and unreliable at best. Most other countries freely publish at least rudimentary statistics on demographics, health, economics, and other areas, but in the DPRK, such figures are either unavailable or of questionable quality.

Yet quantitative research on North Korea is by no means impossible, and in fact, unconventional investigative strategies can yield interesting data about the country’s economic situation. In a new report, published by the US-Korea Institute at SAIS, I track the development of North Korea’s markets since the early 2000s by comparing commercial satellite imagery that shows key trading areas at various points in time. Using Google Earth and its distance measurement tool, the analysis surveys a large number of markets in 12 major cities across the country, studying their development over time and their geographical distribution. By considering how the use of space in North Korean marketplaces has changed since the start of the previous decade, we can get a sense of how the country’s overall market activity has developed during that period.

This topic deserves a great deal of attention, as the rise of markets is perhaps the most crucial institutional change that has occurred in the North Korean economy since central planning broke down in the 1990s. It is still too early to tell exactly what impact these markets have had on North Korea as a society; however, their growth has meant that an increasing amount of economic activity has taken place outside the country’s state-run economy. Meanwhile, the regime’s response to the markets has swung, like a pendulum, between policies of suppression and accommodation. To understand the trajectory of North Korea’s economy, we must continue to monitor how its markets develop.

The particular shape and structure of North Korea’s official markets make them possible to recognize in satellite imagery. Though marketplaces first arose as an illegal phenomenon outside the country’s official economy, the state gradually formalized and regulated certain sites and incorporated them into the official economic system. As part of this process, the government has provided recognized markets with designated areas and built walled structures and rooftops to support them, making them possible to identify from above.

There are, of course, methodological shortcomings to a physical analysis focused strictly on changes to North Korea’s formal markets. For example, the survey’s results may not closely track the overall development of North Korea’s commercial activity, much of which likely occurs outside the official markets. Still, this study offers a unique means to follow the development of the country’s visible marketplaces—institutions that, until now, have remained largely opaque to outside scrutiny. Moreover, satellite analysis allows us to discern a number of interesting and perhaps surprising trends in North Korean market activity.

First, North Korea’s markets have seen overall growth since the early 2000s. In some cities, they have grown only marginally, but in cities like Sinuiju, across from Dandong in China, markets grew by over 110 percent between 2003 and 2014. Other cities have seen much more moderate increases in market space, like Kaesong, where aggregate market space grew by approximately 16 percent between 2004 and 2013. In cities like Sariwon and Hamhung, combined market space barely seems to have changed at all during the measured period. The source of this growth disparity remains a major question that merits further study.

Second, government repression of the markets usually does not translate into less space for market activity. In other words, during periods when the North Korean government has cracked down on the markets, like 2009-2010, markets generally have not permanently closed on any noticeable scale. One notable exception is Pyongsong, the capital of South Pyongan province.[1] While the continued existence of market space under such policies does not prove that market repression did not occur, it does suggest that North Korea seldom adopted policies of market repression with the intention of closing down the markets for the long term. If the government had intended to halt market activity permanently, it is reasonable to expect that they would have begun closing down markets.

Several other factors may help to account for the apparent persistence of North Korea’s market space through periods of official repression. In some cases, the repressive policies may simply have been reversed. For example, the regime eventually acknowledged that its 2009 currency revaluation was a mistake and even supposedly executed Pak Nam Gi, the official in charge. In a number of instances, the complete elimination of local markets might not have been the intention of North Korean authorities. Under such circumstances, the regime could have wanted to remove certain types of traders, such as particularly wealthy ones, without doing away with the market system entirely. And in certain cases, market activity may have decreased even when building structures remained.

In a surprising third development, patterns emerged in the geographical distribution of the cities with the largest aggregate market space. The common narrative is that much of North Korea’s market activity is driven by economic exchange across the Chinese border, and that market activity is the most prolific in the northern provinces of North Korea. While evidence does not disprove this, it calls into question the geographic distribution of centers of market activity. The city with the largest aggregate market space per capita is the western port city of Nampo. The second largest amount of market space per capita can be found in Haeju, the capital of South Hwanghae province and part of North Korea’s breadbasket south. As a general rule, North Korean authorities devote significantly more land to market space in southern cities than in northern cities.

There are several possible reasons for North Korea to devote greater shares of land in its south to market activity. Because farming is more prolific in the region, growers there may have more agricultural produce from farms and kitchen gardens to sell at markets. It could also be the case that a greater proportion of trade in the country’s southern regions occurs at formal marketplaces than in the north. Anecdotal evidence suggests that a great deal of market trade occurs outside of the formal markets, often even in private homes. The formal market spaces tell an important part of the story, but not all of it. Another factor that is difficult to measure, but should not be forgotten, is the role of potential differences in local policy preferences. Policymakers who oversee markets in the nation’s southern regions may simply be inclined to designate larger quantities of space for markets.

The data set assembled from satellite images for this report shows numerous developments that do not fit a neat pattern. It is often unclear why certain markets are closed while others are opened or expanded, or why these changes occur at specific points in time. Overall, the data indicates that much of what happens with North Korean markets may simply be the result of differences in policy choices by cadres and officials in different localities.

The development of North Korea’s markets is a crucial issue to follow, and the lack of data from its government forces us to get creative. Satellite imagery offers an important source of data about the country, and a multitude of additional topics remain to be studied by looking at the DPRK from above. North Korea’s infrastructure, for example, deserves further study; the roads, railways, and other transport systems that connect North Korean cities to the rest of the country could be critical variables for the markets. With software tools such as Google Earth, analysts now enjoy an unprecedented level of access to quantifiable data about North Korea. More than ever before, potentially valuable information about the country is available to anyone willing to translate this data into hard numbers.

[1] The city, just north of Pyongyang, was long home to one of the largest wholesale markets in the country. When this market was closed and torn down in 2010, the total market space of the city decreased by 70 percent.