Inspector O pointed his finger at me over the remains of our meal, an early dinner of nameless fish, sautéed carrots and a nearly empty bottle of nondescript wine.

“How so?” I asked. “You know perfectly well that I’m not paid, I’ve signed no contract, we have no verbal understanding or even a framework agreement. You have no lurid photographs, no hooks, not even gossamer threads. You cannot fire someone who is not an employee and who has no fiduciary relationship, implied or otherwise. That’s capitalism, O. Get used to it.”

“Says you.” O looked at the plate of fish without enthusiasm. “If I say you’re fired, you’re fired. THAT’S capitalism.” He jabbed his finger at me. “You’ve been wrong one too many times, Church.”

“Care to be specific? You urgently insist I come all this way to Barcelona for a meeting; you make reservations at what may be the least interesting restaurant in all of Catalonia; and now, even before we are done with the meal, you insult me with unfounded accusations? Is that how you treat a guest?”

“Unfounded accusations? Perhaps you have forgotten all the ridiculous analysis you have fed me over the years. Has any of it come true? Even once?” 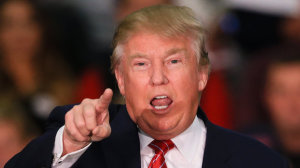 “Don’t try to nuance your way out of this one, Church, not this time. When we met barely a month ago, you said Trump would be gone by now. I pressed to make sure, but you had no hesitation. So, I reported that back, as I’m bound to do. And now they are howling because he’s still around. And who is being blamed? I am. Jo.”

“Relax, would you? Learn all the languages you want, but don’t worry about American politics. So things are a little crazy right now, but they’ll sort themselves out. These things take time.”

“Time.” O smiled grimly. “This Trump fellow was a joke before, but now none of you seem so sure. He’s still in front, and getting stronger if I am to believe your reptile media. Can I ask you a question?”

“More wine?” I filled his glass, then emptied the dregs of the bottle into mine.

“Tell me,” he lowered his voice almost to a whisper. “Did the American people re-elect George Bush in 2004?”

I took a sip to give myself time to think. This wasn’t a question since he already knew the answer. It was a dart, poison tipped.

“You have to consider the situation,” I said finally, “look at the context, the particulars of the moment. You can’t compare apples and oranges.”

“Don’t change the subject. Just admit it! Trump might not drop away.” O brought his fist down so hard on the table that the silverware fled. “The man might actually win.”

“Some people still don’t think so.” I picked my fork off the floor. “Some people think his supporters are just having fun.”

“Once the cork is removed,” I indicated the empty bottle, “many of these less well known wines are finished. Open it up, have a couple of glasses, and then a few days later, all that’s left is salad vinegar.”

“Ah, Church, how could I have doubted you? Salad vinegar! I should have realized, this is not an election for president. It is a trip to the market to select beets and rhubarb.”

“Tell your friends not to worry, would you? There is a long way to go, from now all the way to November.”

“I suppose that’s the croutons speaking.”

“Calm down, will you? It was just an illustration.”

“Listen, you’d better be prepared with a damned good illustration to explain things a month from now when your boy is still around. If he lasts another month, there is no way my people are going to assume he will disappear. And then…”

“And then you will really not like what happens.”

“No threats, OK? Besides, did your people read the nice things he said about Putin?”

“All the more reason to worry.” Abruptly, O reached into his pocket for a notebook. “Never mind that. I have a message for you.”

This, I knew instantly, was why I had been summoned. A message. I made a stab a staving him off. “Should we split a dessert?”

“It’s a serious message.” He thumbed through the pages until he found what he wanted.

“Can it wait for the coffee?” Another effort, half hearted since I knew it was hopeless. “They probably serve coffee in nice little cups.”

“This is from the top.” O directed his gaze aloft. “It was still sizzling when it showed up on my desk.”

“Very hot. We can put up with a lot from your people, Church, and we do, but this one went way over the line.”

“The other day, the chairman of your joint chiefs compared us with ISIS.”

“That’s it?” I put my memory on full scan. Nothing came to mind. “That’s what this is about? Fifteen hours in economy class for this?”

“If anyone ever does that again, you will be sorry.” He did not look like he was kidding. “That’s the message.” He shut the notebook and returned it to his pocket. “Please pass it on. Go ahead, write it down if you want to. You need me to repeat it?”

“I’m assuming from what you have just said that someone,” I looked upwards, “does not like being compared with ISIS.”

“Whatdya’ know. I got through for once. No, they don’t like it. Shall I go down the list why? First of all, we don’t behead your people when they are arrested; we release them.”

“A point in your favor, no doubt.”

“Second, we have no crazy ideas of establishing a caliphate.”

“Haven’t I seen articles celebrating soldiers who sacrificed their lives, throwing themselves at American tanks.”

“Oh, come on. You don’t give medals for valor, for extreme sacrifice?”

“We are not religious zealots, we are not gangsters, we don’t destroy history, we don’t…”

“Then speak up against ISIS, why don’t you?”

O looked at me, open mouthed. “Didn’t we do that in so many words by sending condolences to the Russians, to the French, to the Lebanese, to the Malians over the past few months?”

“But you want to destroy us!”

“You keep saying it. You even post videos of your missiles exploding over our capital.”

O folded his napkin and put it beside his plate. “That was a dream sequence, a fantasy. It’s propaganda.”

“Some people don’t look at it that way.”

“Some people haven’t seen a B-52 approaching on radar, either. That’s not a fantasy.”

“OK, supposing I pass the message, then what? No, wait. Actually, now that I think about it, I seem to recall the general wasn’t really comparing you to ISIS. Nothing like that. He was comparing the challenge, the complexity of the two military challenges, that’s all. He said the challenges were similar in terms of complexity, not that you were the same as ISIS. As usual, your side has jumped to conclusions.”

“Jumped to conclusions? Maybe your people should go into their bottom drawer, way, way at the bottom of the dusty pile, and find their copy of an anti-terrorism statement we signed with Washington in 2000. October 2000. Interesting reading. Surely you recall that.”

“That was then. This is now. Why bring it up fifteen years later? You have something in mind?”

Inspector O pushed his chair back and stood up.

“Going somewhere?” I tried not to sound pleased. “We haven’t had dessert.”

“I’m off to see the Gaudi cathedral. Want to come along?”

“Well, thanks for the fish. I’ll wait to hear from you. Maybe we can have lunch. Pastrami or something. Not our normal fuzzy rye, huh?”

“Khazeray!” I shouted after him, but he was already out the door.