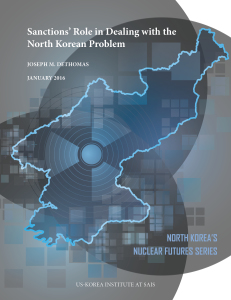 For almost a decade, sanctions have been the principal coercive instrument available to the United States and the international community in trying to deal with North Korea’s nuclear weapons and long-range ballistic missile programs. As bilateral and multilateral negotiating tracks with the DPRK have withered, sanctions that were initially crafted to slow North Korean proliferation programs and steer Pyongyang toward a negotiated reversal of those programs now seem untethered from overall policy.

Given the evolution of North Korean policy and the status of its proliferation programs, the current sanctions are inappropriate and overmatched. This is not to say sanctions have no role in dealing with the issue, but rather they must be put into the service of an overall strategy relevant to the realities of the region, particularly since, given the steady increase in the DPRK’s nuclear capabilities, the next decade could lead to severe effects on vital US interests.

This paper explores the many pitfalls of the current sanctions levied against the DPRK and offers a new approach the United States might take to better integrate sanctions with evolving strategic objectives.

Download the report, “Sanctions’ Role in Dealing with the North Korean Problem” by Joseph M. DeThomas.