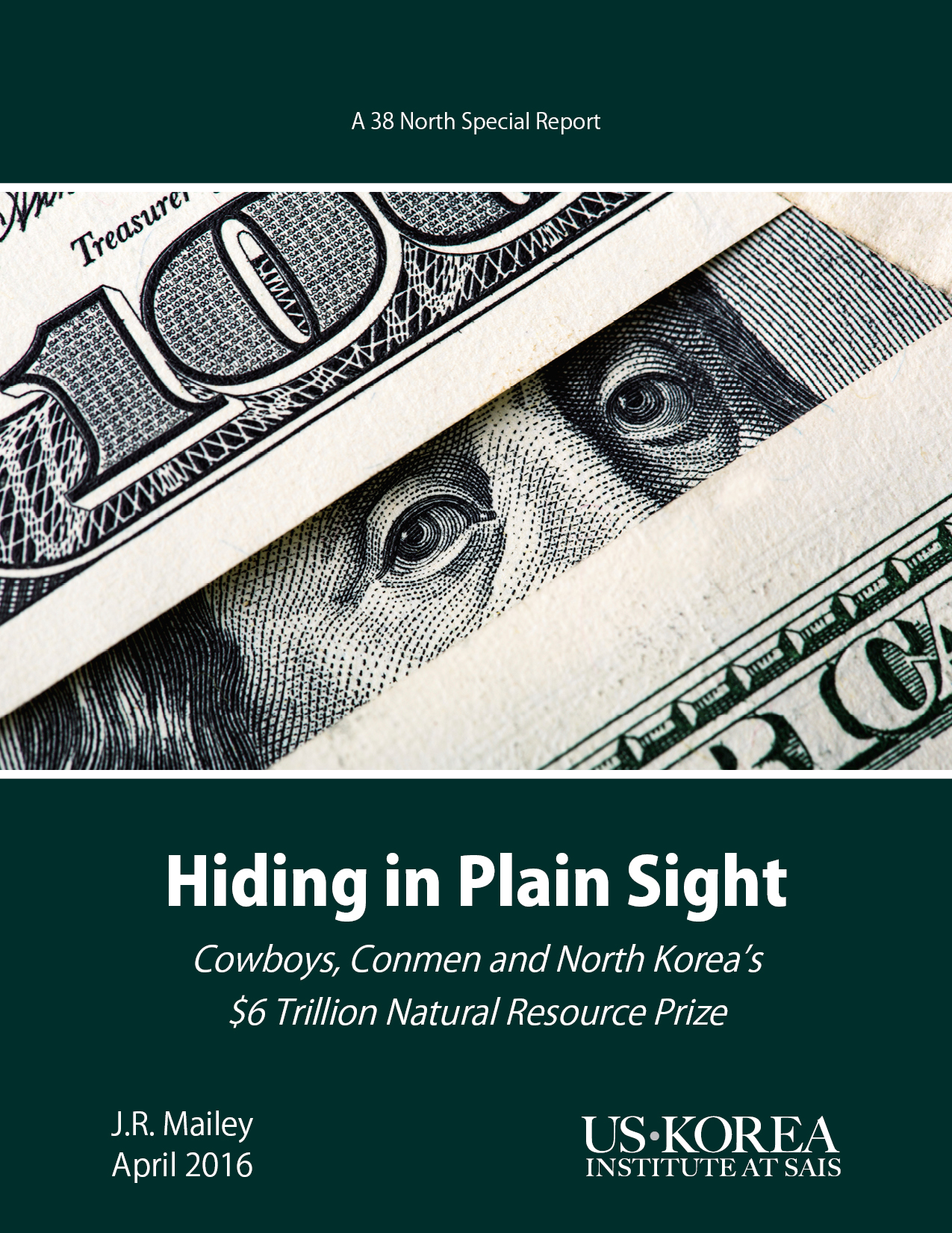 Kevin Leech became a billionaire through a series of investments in pharmaceutical and technology companies after selling his family’s 38 funeral parlors across England. After losing everything when his company, an internet incubator named Ci4net.com collapsed, Leech emerged from bankruptcy in 2005 and engineered a series of mining deals with North Korea. This 38 North Special Report profiles the story of this “cowboy capitalist,” whose deals with Pyongyang raise serious questions about potential violations of economic sanctions on a global scale.

Announcements made by companies linked to Leech claimed to possess the rights to mine and sell North Korean gold, silver, lead, coal and rare earth minerals for 25 years. One company linked to him, Pacific Century Rare Earths Limited, even claimed to have discovered the largest deposit of rare earth elements in history in Jongju, just north of Pyongyang. That discovery, if confirmed, would potentially make North Korea a powerhouse in the global rare earth industry.

There was even an attempt to list two other Leech-linked mining assets on the Australian Stock Exchange (ASX). Documents filed by the company that would have held the asset, however, seemed to reveal that the asset was ultimately linked to the Natural Resources Development and Investment Corporation (NDIC), a North Korean entity designated under UN sanctions for its involvement in weapons proliferation. Other documents that are part of this investigation show that Leech’s relationship to the NDIC dates back to at least 2009. To date, none of the individuals involved in these dealings with the NDIC have been convicted of any crime because of their operations in North Korea. Nor does the mentioning of any individual in this report necessarily suggest that they have broken any law or violated sanctions.

Dr. Louis Schurmann, an Australia-based South African geologist contracted by Leech to work on mining projects in North Korea, is one of the few names publicly associated with the British tycoon’s mining ventures in North Korea. Publicly, he was listed as the head of a number of firms involved in Leech’s North Korean gambit. However, Schurmann does not appear to have a stake in any North Korean mineral assets—and it may be that Schurmann’s expert reputation was used to merely advance the credibility of otherwise dubious operations. In fact, there is a long list of companies and investors in half a dozen countries involved in the North Korean deals tied to Leech-linked companies, many of whom, until now, have been able to remain unnamed through the deft use of anonymous shell companies in opaque financial jurisdictions like the British Virgin Islands and United Arab Emirates.

In April 2016, however, the veil of anonymous shell companies was pierced. A deluge of 11.5 million documents became available from a law firm in Panama called Mossack Fonseca that revealed the identities of owners and directors of many previously hidden offshore companies. In the course of a parallel investigation, the Australian Broadcasting Corporation (ABC) gained access to some of these documents. They provide new details about many—but not all—of the firms and individuals involved in Leech’s operations. The documents reveal that a group of men who have engaged in a number of controversial business transactions with one another over the course of a decade hold positions in virtually every company linked to Leech’s mining ventures.

One of the hidden directors revealed by the Panama Papers has been implicated in multi-million dollar securities fraud in the United States. This 38 North investigation also found that Leech’s operations are linked to one of the most bizarre episodes of foreign investment in North Korea’s mineral sector dubbed by the media as “the trillion dollar con.” In that case, a Jersey-based convicted fraudster named Russell King reportedly engineered the takeover of a British investment bank called First London by claiming to manage the assets of deep-pocketed Middle Eastern royalty. Kevin Leech and several of his close associates became shareholders and directors of the bank and a letter of guarantee from First London helped King and his associates persuade the owners of Notts County FC, a professional English soccer team, to hand the team over for only £1. In order to recruit renowned coach Sven-Goren Eriksson, Notts County offered him millions of dollars worth of shares in Swiss Commodity Holding, a Kevin Leech-led company that claimed to possess lucrative mineral rights in North Korea. King, Eriksson and others linked to Notts County even travelled to North Korea together. When the deals were exposed as a ruse in 2010, First London imploded, Notts County fell into enormous debt and Swiss Commodity Holding’s North Korean mineral deals were cancelled by the NDIC.

Various reports and experts have questioned the viability of the deals linked to Schurmann and Leech. Moreover, a number of businessmen involved in the deals now claim that none of their agreements in North Korea have borne fruit. Despite numerous prior assertions by individuals and companies involved in these dealings that progress had been made toward mining and exporting North Korea’s minerals, several individuals linked to the deals now state that none of the mines are operational. (Schurmann does, however, stand by his geological assessments and reports of North Korea’s mineral potential.)

The questions about the validity of the claims made by these companies combined with the involvement of several individuals previously involved in securities fraud should trigger a thorough examination of the deals by securities regulators and law enforcement.

International sanctions imposed upon North Korea because of its nuclear and missile programs—even the more far-reaching sanctions recently imposed by the UN Security Council—are obviously only effective if adequately enforced. Efforts by international companies and individuals to acquire mineral assets from a UN-designated entity should trigger investigations of sanctions violations taking place on a global scale. Moreover, the results of this investigation highlight the need for countries like Australia to strengthen their sanctions enforcement efforts and institutions. The United Kingdom recently set up an office specifically charged with sanctions implementation; other countries should follow suit.

The findings of this investigation also highlight the degree to which unscrupulous investors and other criminals are able to abuse anonymous shell companies to conceal their operations and potentially evade sanctions. Eliminating this loophole should be a major priority for governments seeking to bolster sanctions implementation. Curbing the abuse of these entities will require every country—especially major financial hubs—to establish low-cost, searchable public registries that contain basic information about the owners of any company formed in their territory. Reform-minded governments could take steps to shift the burden of compliance responsibility onto incorporation services firms themselves. Like banks, these firms should be required to undertake customer due diligence measures so that they know the identities of individuals who benefit from the companies that are formed. These firms should be held accountable for instances in which they have either knowingly provided services to entities under sanctions or failed to undertake the proper checks.

This 38 North Special Report is based on primary corporate records, media reports about the cases profiled and interviews with experts and individuals involved in the deals. During the course of this study, a parallel investigation into the same case was undertaken by the Australian Broadcasting Corporation (ABC). The author and researchers shared information pertaining to the deals discussed in the report. Some information in this report is based on ABC’s reporting on the Panama Papers, a large trove of documents that was obtained from the Panamanian law firm, Mossack Fonseca, which provides details about the previously hidden directors and shareholders of anonymous shell companies. The author is thankful to those who helped provide information, analysis and insights, including numerous analysts and researchers affiliated with the US-Korea Institute at the Johns Hopkins School of Advanced International Studies and the Center for Advanced Defense Studies.

J.R. Mailey is a Visiting Scholar at the US-Korea Institute at the Johns Hopkins School of Advanced International Studies. He is also a Senior Policy Analyst for Natural Resources & Conflict at the Enough Project. Prior to joining Enough, J.R. was a Research Associate at the Africa Center for Strategic Studies, where he specialized in natural resources, corruption and security in Africa. While at the Africa Center, he authored the ACSS Special Report, “The Anatomy of the Resource Curse: Predatory Investment in Africa’s Extractive Industries.” He also previously worked as a researcher for the US-China Economic & Security Review Commission, where he was co-author of “The 88 Queensway Group: A Case Study in Chinese Investors’ Operations in Angola and Beyond.”